In reaction to an increase in graffiti in the 1980s, the Philadelphia Anti-Graffiti Network was created to eradicate the artwork from the city’s buildings, trains, bridges and anything else that graffiti artists – properly known as writers – could spray.

Muralist Jane Golden was hired by PAGN to connect with writers and refocus their energies into the Mural Arts Program.

Serving as the program’s director, Golden reached out to writers and community groups in order to install large-scale, collaborative murals within the communities.

“Our portfolio of work is engaging [people] and representing people,” Golden said.

To-date, MAP has completed more than 3,600 murals around the city, with the help of volunteers and artists.

Despite its focus on a collaborative artistic effort MAP has had a difficult time shaking its PAGN affiliation, leaving many writers at odds with the program.

Philadelphia street photographer, Joe Schaefer, has been shadowing writers in the city for months. Through his work, Schaefer has acquired a unique perspective into the world of the graffiti community.

Schaefer said that there was some agitation between writers and MAP, particularly in reaction to the installation of German painter Katharina Grosse’s “psycholustro” (feature photo) near the North Philadelphia train tracks.

“Graffiti artists kind of see that as disrespectful,” Schaefer said. “Why pay some lady overseas $300,000 so she can hire painters when you have all this talent in Philadelphia.”

“The ‘psycholustro‘ project, despite going over a lot of good graffiti, was cool to me,” Nise said, “because it was the first time that I saw Philadelphia take a chance on letting large scale art happen and not water it down with a board room of community do-gooders.” 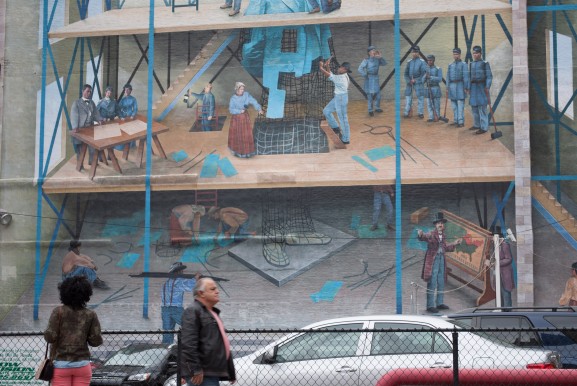 Nise said MAP was getting closer to encouraging real art, despite having typically failed to do so in the past and he criticized MAP’s leadership.

“I just personally find [installations from MAP] to be disingenuous coming from Jane Golden,” Nise said, “whose entire career has been defined by snuffing out organic art and replacing it with contrived and toothless art by committee schmaltz. There’s something suspect to myself, and many others I think, about the parallel between street art becoming an accepted art form of sorts and Ms. Golden’s sudden, 180 degree change in approach to graffiti.”

Golden said she harbors no hard feelings toward the graffiti community and expressed an appreciation for street art as a whole. She challenged writers to work with MAP on collaborative projects, though not many writers are likely to take her up on that.

Schaefer said that some writers see working with MAP as selling out and that it undermines the artistic integrity of graffiti and graffiti culture.

Nise put it simply as, “I think the general feeling among graffiti writers is that Murals Arts is pretty corny.”

For Golden, her role at MAP and her ambitions as an artist appear to be frustrating each other.

While Golden believes that art suddenly appearing in a community can be thrilling, the lack of permission can be problematic. 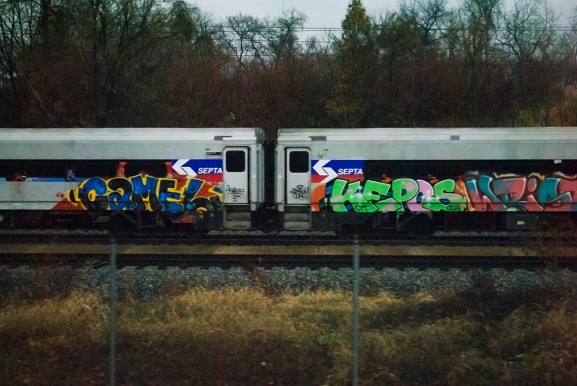 The bottom line for MAP is based on permission. Golden has no interest in waging a war against graffiti writers, but as the head of MAP, she said the program has a strong opinion on unsanctioned public art.

“I don’t have a punitive approach to [the graffiti] world,” said Golden. “I’m not looking at it from somebody who thinks graffiti writers should all be locked up. But if you’re defacing private property, it’s not ok.”

Through her work with MAP, Golden has developed a sense of respect for the public and street art community.

“What’s going on now in the world of street art, muralism and public art and how they’re all influencing and talking to each other and inspiring each other, I think that’s a great thing for public art in general,” Golden said.

The community members who live in those neighborhoods where sanctioned or unsanctioned public art exists seem to be the last to weigh in on the subject, with many of them hesitant to choose a side.

Mike Leite, of Manayunk, shares a view on unsanctioned street art that is echoed by many community members across the city.

“You can look at it both as an expression or a nuisance, it just depends on your attitude to it,” Leite said.

Leite said he leans slightly more on the side of understanding graffiti as an expression, but sees room for improvement on how that expression is transmitted.

His thoughts mirrored MAP’s ambitions as well as a greater sense of community connection.

“I think that more good could be done if all the efforts were put together to put up a mural or put together a whole work of art,” Leite said.

For Nise, the idea of collaboration between graffiti artists and MAP just doesn’t make sense.

Andrew Ha describes his relationship with music as a marriage, but it’s not his only commitment. Like many working Americans, Ha holds regular job hours from 9 a.m. to 5 p.m.; he works for the Jewish [Read More]

https://vimeo.com/67590333] This year’s Manayunk Bike Race appeared to be a smooth ride for public officials, after facing complaints and difficulties in years past. Known this year as the Philadelphia Cycling Classic, negative media attention surrounded [Read More]