As he made his way up the familiar steps at the corner of Spruce Street and Columbus Boulevard, he placed his hand on a wall.

This wall, the Philadelphia Vietnam Veterans Memorial (shown below),  lists the names of more than 600 fallen men from Philadelphia who lost their lives while serving in the Vietnam War. His hand is placed over the name of Hugh W. Elmore, a soldier that McCallum had once aided in Vietnam while serving as a medic.

“Everyone has some sort of guilt,” McCallum said. 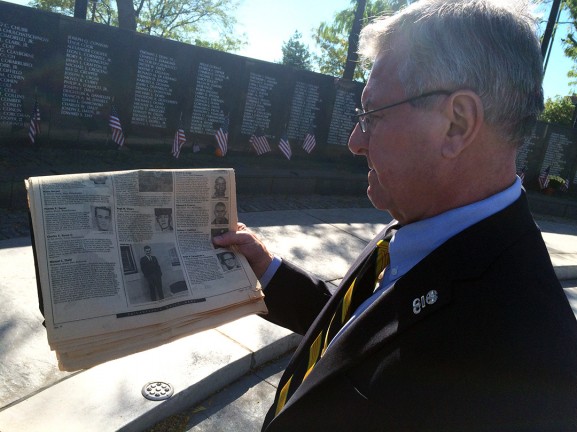 Close to three million U.S. military personnel served in Vietnam during  the war.

McCallum, a Philadelphia native, spent one year in there as a medic.

After 10 weeks of basic medical training, McCallum completed 10 more weeks of on-the-job training, working in various wards of the base hospital. Medics had the risk of assignment within 36 hours, so training then continued in preparation for sudden deployment.

For McCallum, the training was a distant memory when the threat of deployment became reality.

In Vietnam, McCallum was assigned to the C Company of the 1st Air Cavalry, a rifle platoon. He worked in direct combat situations and was responsible for the aid of approximately 25 men at a time. Most days were typically the same for McCallum, patrolling, waiting for the quiet to be broken by periods of combat. The idea of waking up and possibly dying ten seconds later never left his mind. 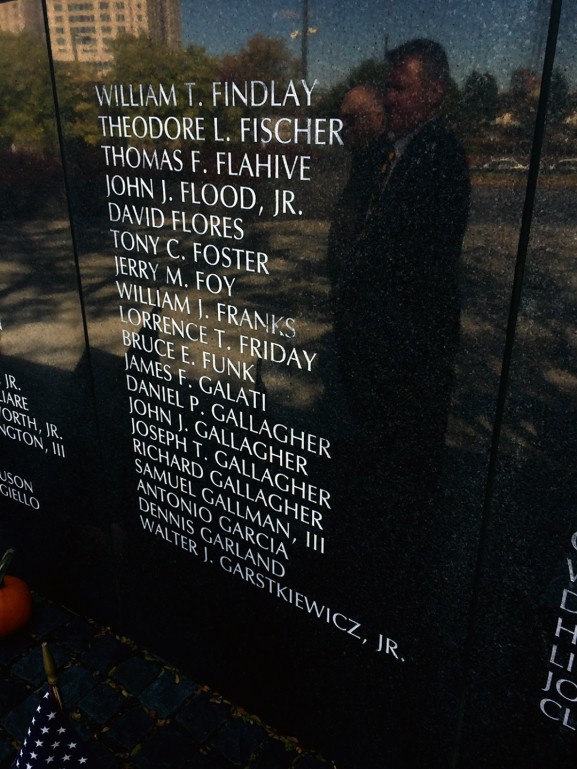 “In your mind, you have to be just about perfect in everything you do,” McCallum said. “You’re always trying to prepare yourself.”

He developed a perfectionist mindset while working as a medic, routinely rearranging the contents of his aid bag, taking out items that he might not need and organizing it in a way to reach the most important items as fast as possible.

“You’re trying to cover every possibility,” McCallum said. “You can’t do it, but you drive yourself nuts trying to do it. And I probably drove myself pretty goofy doing it.”

Those like McCullum who survived the war, did not always return home unscathed. Soldiers returning home from Vietnam were experiencing what was called Post Vietnam Syndrome, harboring guilt, anxiety, anger, depression and alcohol and drug dependency.

According to a study conducted by Columbia University and the Harvard School of Public Health, 19 percent of Americans that served in some aspect of the Vietnam War suffer from what we now refer to as PTSD.

Before 1980 this was known as a stress response. According to Dan Begg, a researcher conducting psychological effects of wars on soldiers, this stress response was then said to be pre-existing in the soldier’s minds and not eligible for any governmental disability treatment.

This was when the term post-traumatic stress disorder (PTSD) began to gain attention.

It was extremely common for combat medics and female nurses to be consumed with guilt afterwards for not doing enough to save a dying soldier.

“I had no desire to continue with medical after the service,” McCallum said. “I couldn’t get out faster than I did because of my guilt from not being able to save everyone.”

The National Vietnam Veterans Readjustment Study was conducted in 1983 to obtain accurate information about what these veterans were experiencing post-war. A majority of the veterans were able to readjust to life back home, but of those that could not, very few looked for help.

McCallum, however, did reach out for help. Therapy along with a suggestion by his daughter prompted him to write his memories down. Megan Bartlett, a licensed counselor and friend of McCallum’s, agreed to help him self-publish a memoir of his experiences.

Bartlett, who has self-published her own book, noticed McCallum’s closed-off demeanor when they met at a gym. A friendship grew, and they frequently attend church together in South Philadelphia.

“I see the end product not only being a tribute to his time there,” Bartlett explained about her assistance in helping McCallum with the book. “But a tribute to many of the people he served there as well.”

The book, “Visions of Vietnam – An Army Medic’s View of the War,” has a planned release of December 2015, the fiftieth anniversary of McCallum’s deployment to Vietnam. 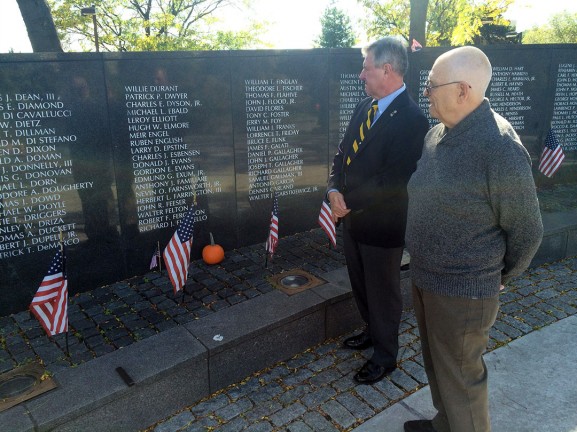 A growing population of Southeast Asian refugees comes with an exciting new culture to learn from, along with serious health needs that require specific attention. Those who lived or immigrated during times of unrest, like [Read More]

Powelton Village: Vietnam Vet Opens Up About Life After War

Sam Hampton, a Vietnam War veteran, never took a moment for granted since his Marine Corps days. In June 1968, the then-18-year-old went to war and has since suffered from post-traumatic stress disorder. Sitting in [Read More]

The First United Methodist Church of Germantown (FUMCOG) has sat on the corner of East High Street and Germantown Avenue since 1796. In September, the congregation welcomed 33-year-old Jeanna Murat (pictured above). Murat is first [Read More]