Project MEOW is a nonprofit organization helping to control the stray cat population in West Philadelphia, and it has one very important goal to accomplish: Make Every One Wanted.

Founded in 2007 by Beth VanHorn, Debby Boyd and Pam Hopkins, the volunteer-run group has helped hundreds of cats per year, with their unique approach to controlling the cat population in the city.

Former co-director and volunteer Tracy Byford has worked with the organization to help lower the amount of homeless felines, and said that it is her own way of giving back to the community. The reasons some people give for abandoning their cats, she said, are simply ridiculous.

“People dump their cats for a variety of reasons,” Byford said. “One is that they are leaving school and they can’t take the cat with them, so they figure it will be OK outside. Another reason is that he or she got fleas, and so some people just don’t realize that topical flea treatment is pretty easy to put on a cat that has fleas. My personal favorite is that ‘She got pregnant and is going to have kittens, so I had to dump her outside.’ I look at that as, ‘Who’s the smart one here?’”

Byford added that while it would be nice to say that the majority of stray cats are feral, or wild, and could remain living outside, the reality is that more than 50 percent of the homeless cats are friendly felines. 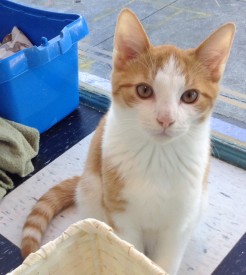 After an initial rescue, veterinary services are provided for the non-feral cats by PAWS, a local animal shelter which partnered with MEOW.

For the past three years, another organization called Best Friends has been providing free trap, neuter and release services for cats that cannot be adopted.

Volunteers use the TNR method – or trap, neuter and release – to catch the free roaming feral cats, Byford said. Project MEOW does not under any circumstances trap and kill.

“I’ve actually added an ‘M’ onto that: trap, neuter, release and manage, which is the caring for the animal,” Byford noted. “It’s an alternative to what used to happen years ago, which was that cats would be picked up, they’d go to the city shelter, and if they were unadoptable they’d be euthanized.

“Over time, this became something that a lot of people, including the shelter workers, just found extremely distasteful and wrong,” Byford said. “So the alternative is, let this cat live out his or her life as an outside free roaming cat with care.”

For the less friendly cats that are not suitable to be adopted into a home, a piece of their ear is cut off to represent the fact that they have been spayed or neutered. The procedure is done under anesthesia before they are released outdoors to show that they have been fixed and checked out by a veterinarian, said Lucy Shan, the adoption and foster coordination for the organization.

“We try to find feeders for the ear-tipped cats, so it’s a trade off between finding a dedicated caretaker and getting a little bit of their ear taken off,” Shan said. “The whole thing is painless.”

While many may see the re-release as pointless, Byford said having stray sterile cats that cannot reproduce is better than having non-sterile ones who continue to increase the homeless numbers.

After the cats have been taken care of by a veterinarian, the non-feral felines are put into temporary foster homes until an owner decides to adopt them. Many of the MEOW volunteers serve as foster parents and help to find the animals’ permanent homes. The available cats are listed on the Pet Finder website, as well as Facebook and Craigslist. They have also partnered with the Baltimore Pet Shoppe on Baltimore Avenue, and many of the rescued cats can be adopted from there. 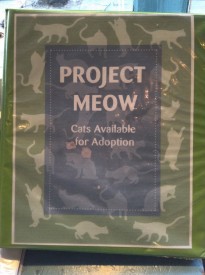 “We encourage anyone who is interested in adopting a cat to send us an email or an application,” Shan explained. “Then we have the adoption team go through and do a background check. Then once we believe the cat is a good match, we’ll arrange a meet and greet between the foster and the adopter. If they fall in love, then they’re free to finalize the adoption by paying a fee and signing the contract before taking the cat home with them.”

While the volunteers agree it is often difficult to have to give up cats to their new and permanent owners, both Byford and Shan said that as hard as is, it is necessary for them to do.

“It’s hard to give them up, I’ll be the first to say it,” Byford said. “But I do it because I know that if I stop with that one, I won’t be able to foster again.”

If a volunteer is unable to give up their cat when the time comes, they are referred to as a “foster fail.” Although it isn’t ideal, it does happen. Geraldine Lavin was a volunteer at the organization, and when the time came, she could not part with her cat, Belu.

“I had never even considered having my own cat before, or even fostering one,” Lavin said. “I got to know him for a few weeks, and the more I thought about it, the more I couldn’t imagine giving him to somebody else.”

Project MEOW has continued to grow and help an increasing number of stray cats, with the assistance of volunteers, donations, fosters and adopters.

“There is an immense satisfaction in finding cats a good home, and knowing that at least for that animal, you make a difference,” Byford said. “It’s a little bit of euphoria because you feel like you didn’t just make the animal happy, but you made the person happy as well.”

To donate, or learn more about fostering, click here.

https://vimeo.com/87656929 w=500 h=281] Flush alongside Erie Avenue between B and D streets stands the headquarters for one of oldest organizations in the country. The Pennsylvania Society for the Prevention of Cruelty to Animals, or PSPCA, [continue reading…]