Before leaving his car and walking into the barbershop on 16th and Tasker streets where he works, William Little lifts a piece of the gear shift and locks it with a pair of scissors.

The maneuver, designed to prevent theft, is a reminder of the crime that remains throughout the area – an aspect of the community that Little knows about all too well. In April 1989, his drug-dealing life on the streets finally caught up with him when he was arrested for murder.

He went on to serve a decade in prison. 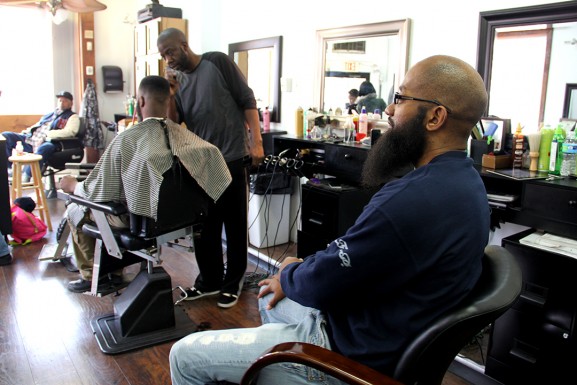 Those 10 years in jail, Little said, provided him with an epiphany of the good he was capable of, and how he wanted to take advantage of the second chance he would receive following his release.

He followed through on that desire. Now, instead of focusing on dealing drugs, he spends most of his time selling a different product: clothing.

The South Philadelphia-native has been making shirts this year, each inked with the slogan “Peace Live In It” below the collar on the front, in what he described as an effort to promote a more harmonious world – one with less murder and violence than the city is filled with. 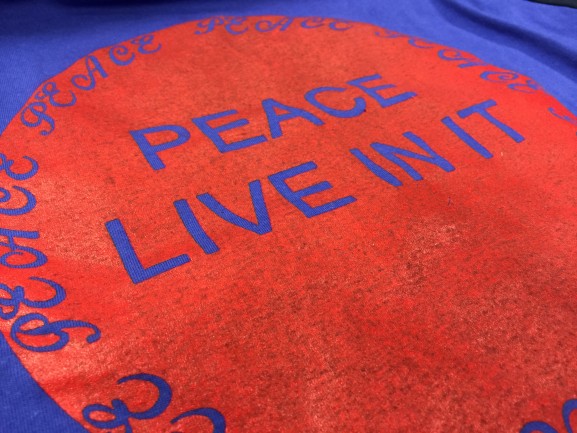 “I wanted to come up with something that hadn’t been done,” Little said. “Just looking from myself growing up, and this environment, looking at the condition now … everyone wants peace and harmony. No one wants to live in chaos and confusion.”

His shirt campaign, which began at the end of last year, has garnered a substantial following on Facebook and Instagram. The account feeds have been flooded in recent weeks with photographs and videos of people holding up shirts and declaring a pledge to promote peace. Participants have ranged from barbershop patrons and neighbors to politicians and community leaders.

“I have a lot of relatives who were gunned down,” local resident Tynieshi Burton said. “I just had a brother who was murdered. I think this is a great idea and a great message.”

“Waking up early in the morning and everything else wasn’t what I really wanted to get into,” Little said. “I was attracted to the streets.”

In prison, though, he was able to read books that were relevant to his life. The words changed him, Little said. He began mentoring younger people who had committed robberies, homicides and other crimes.

The peace shirts are only part of his community outreach efforts. Little began an organization in March 2014 called R.F.P. – which stands for “Redemption Forgiveness Peace” – to mentor children throughout the neighborhood in how to become entrepreneurs. 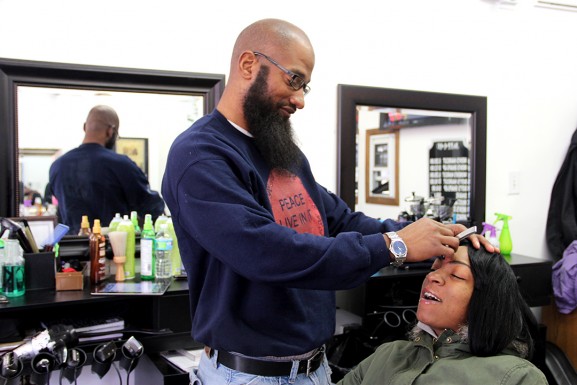 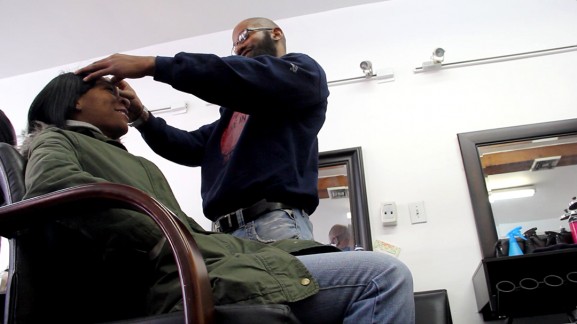 The program is run in conjunction with Jazz-U-Up, the barbershop where Little works at that is located on the 1500 block of 16th Street near the border separating Newbold and Point Breeze. Two of the other founders of R.F.P. are Jazz-U-Up employee Charles Hodge, along with Clarence Hatton – the brother of the man Little shot to death 25 years ago.

Hatton represents the word “forgiveness” in the title of the group, while “redemption” is in reference to Little’s story.

“It’s a free program for all the kids that gives them something to do in the summer,” Little said. “We try to give them a place to go to and have a safe haven, things of that nature, and just teach them about life.”

Little’s work in promoting peaceful alternatives to a life of violence and crime has not gone unnoticed – particularly at the barbershop that took him in at a time in his life when a background check prevented him from getting noticed by other prospective employers. Hodge calls the barbershop “a family.”

“I like what it does for the black community and for everybody,” longtime Jazz-U-Up customer Pamela Burton said. “He looks out for the kids in the neighborhood. It’s definitely needed in this time and this generation.”

Sahmir Sims, a local storeowner and RFP member who took the pledge, said the message the shirts sold by Little are sending is needed in light of violence in Philadelphia and elsewhere.

“A lot of people could learn from his story,” Sims said of Little’s evolution. “It could change their outlook of … if you make a bad decision in life, you can always turn it around into something positive.”

With plans to create more styles, images and content, Little said he wants to continue promoting peace for the foreseeable future.

The group surrounding him wants him to continue, too.

“People are actually taking the pledge,” said Kuri Mason, one of Little’s co-workers. “They’re not just taking pictures of the shirt, they’re on there taking pledges. It’s a great thing, not just for the community but for the world. It’s going to go big … peace – and we’re living in it.”

West Kensington and Fairhill: Five Places to Get a Shape Up Under the El

Kensington Avenue is a bustling promenade featuring all types of characters, businesses and commotion. West Kensington and Fairhill are two neighborhoods in Philadelphia that express an identifiable culture, which involves all who pass through. Here [Read More]

On a typical day at Barbers Inc., the environment is lively. Laughs, jokes and conversations about sports and societal issues flow about the shop and continue outside the doors into the community. It’s a safe haven [Read More]