On a typical day at Barbers Inc., the environment is lively. Laughs, jokes and conversations about sports and societal issues flow about the shop and continue outside the doors into the community.

It’s a safe haven for some, and for others a chance to partake in good conversations. For lead groomer David Choung, the barbershop gives him the opportunity to change the conversation.

Choung, 35, has been cutting hair for about 23 years. Growing up in Germantown, he started charging $3 for haircuts at the young age of 12. He describes his talent simply as a natural, God-given gift. Choung said he knew he was destined to be a barber from a young age.

“I was cutting my brother’s hair with scissors, and I put the bald spot in his hair so close to his skin, my mom swore I was using my dad’s clippers,” Choung said. “When I explained to my parents that I did it with scissors, they thought I was lying.”

He continued: “From that day, I knew I was destined to be great, I did something most people couldn’t do – I put a bald spot in someone’s head with scissors. I felt like that was my calling.”

Choung explained how his environment really pushed him to strive for something different than what he was surrounded by.

“I grew up in poverty, seeing a lot of things,” he said. “I didn’t want to be on the corner selling drugs, and I didn’t want to be the guy locked up behind bars. So when I found my career path, I just stuck with it and chased my dream.” 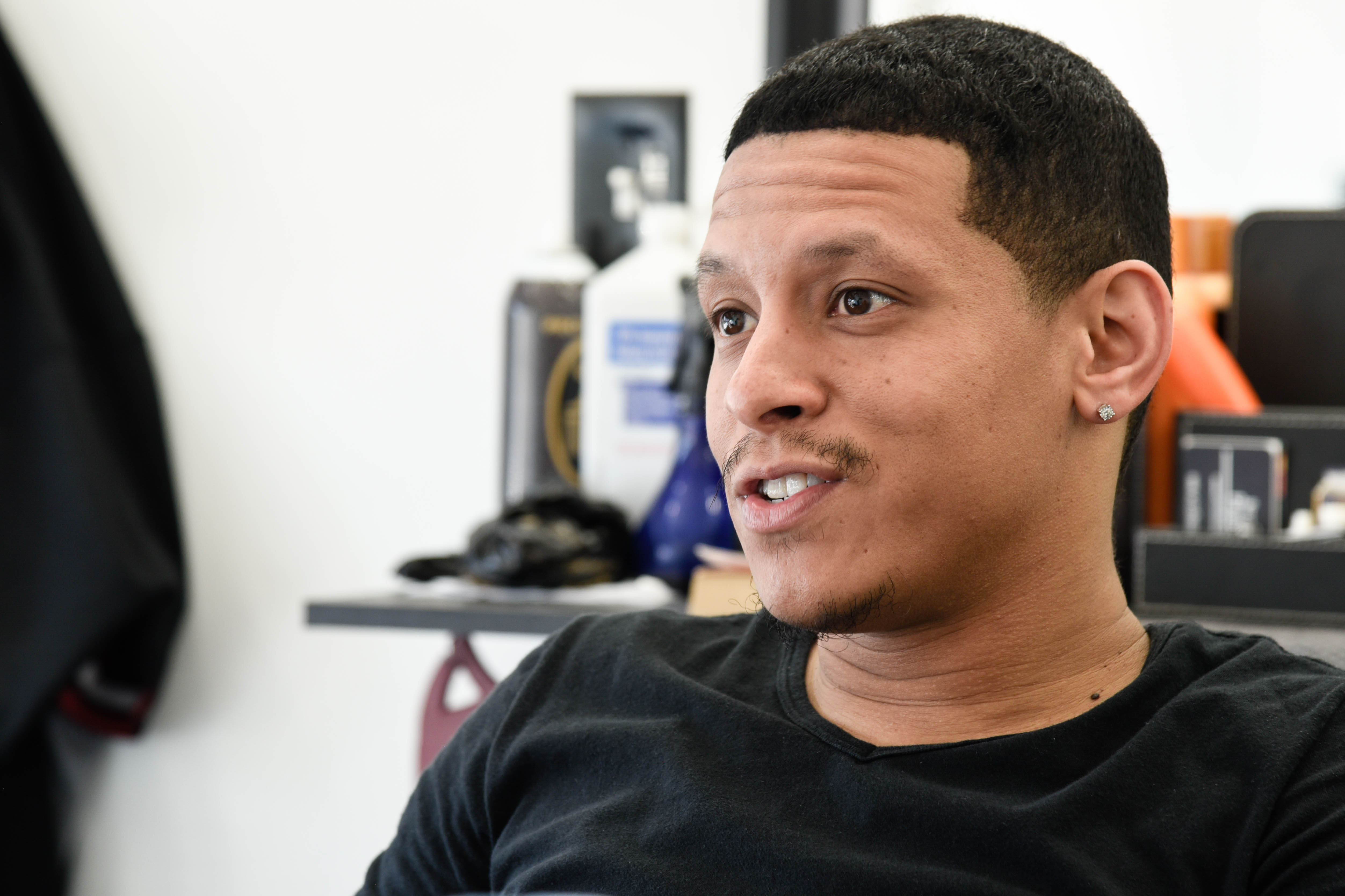 As a child, Choung’s grandmother was an important source of inspiration and influence.

Jamal Aldean, an employee of Barbers Inc., explained that cutting hair for Choung is more than a side job – it’s a passion and a long-term plan.

“I’ve seen a lot of good barbers in Philly,” Aldean said. “Philly is like the Mecca of barbers. … I put him up there with the top I’ve seen in the city. … He’s been cutting since he was kid. … He’s real good.”

Aldean, 41, has known Choung since the early 2000s. He’s been cutting hair professionally for 16 years and describes Choung as precise and consistent. He also explained the importance of the barber shop having a relationship with the community.

“I believe it’s very important to know the people in your community even if they don’t come in and patronize your business,” said Aldean. “I feel like it is good to have the support of the neighborhood.” 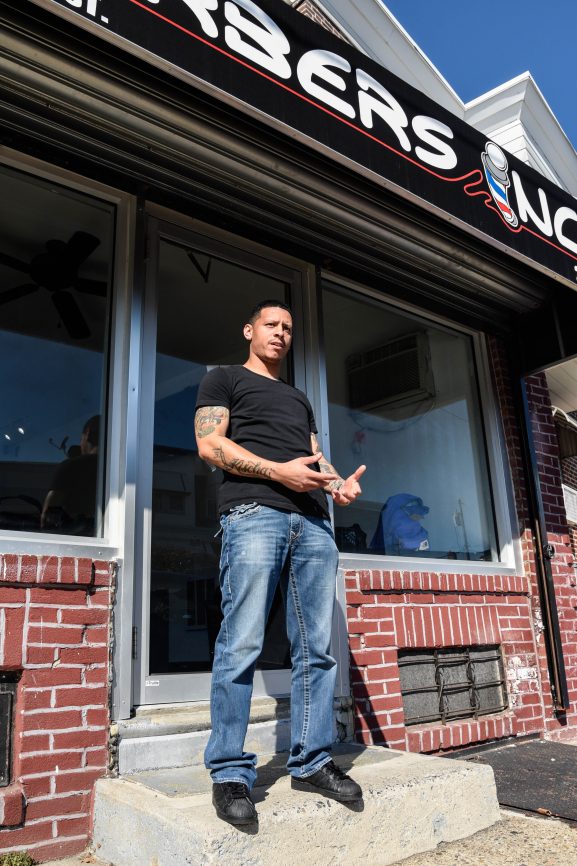 Choung not only urges community relationships, but also reaching the youth as well. He enjoys supporting school drives, and wants them to know that the barbershop supports them. He believes he is responsible for being greater than cutting a client’s hair.

Client William Ancrum (below) has been getting his hair cut by Choung for years, and believes in loyalty and support to his barber.

“He makes you feel comfortable when you’re in the chair,” said Ancrum. “He has the sharpest hands in Philadelphia.”

Ancrum joked: “If he was in a coma, I would wait until he was out so he can cut my hair.” 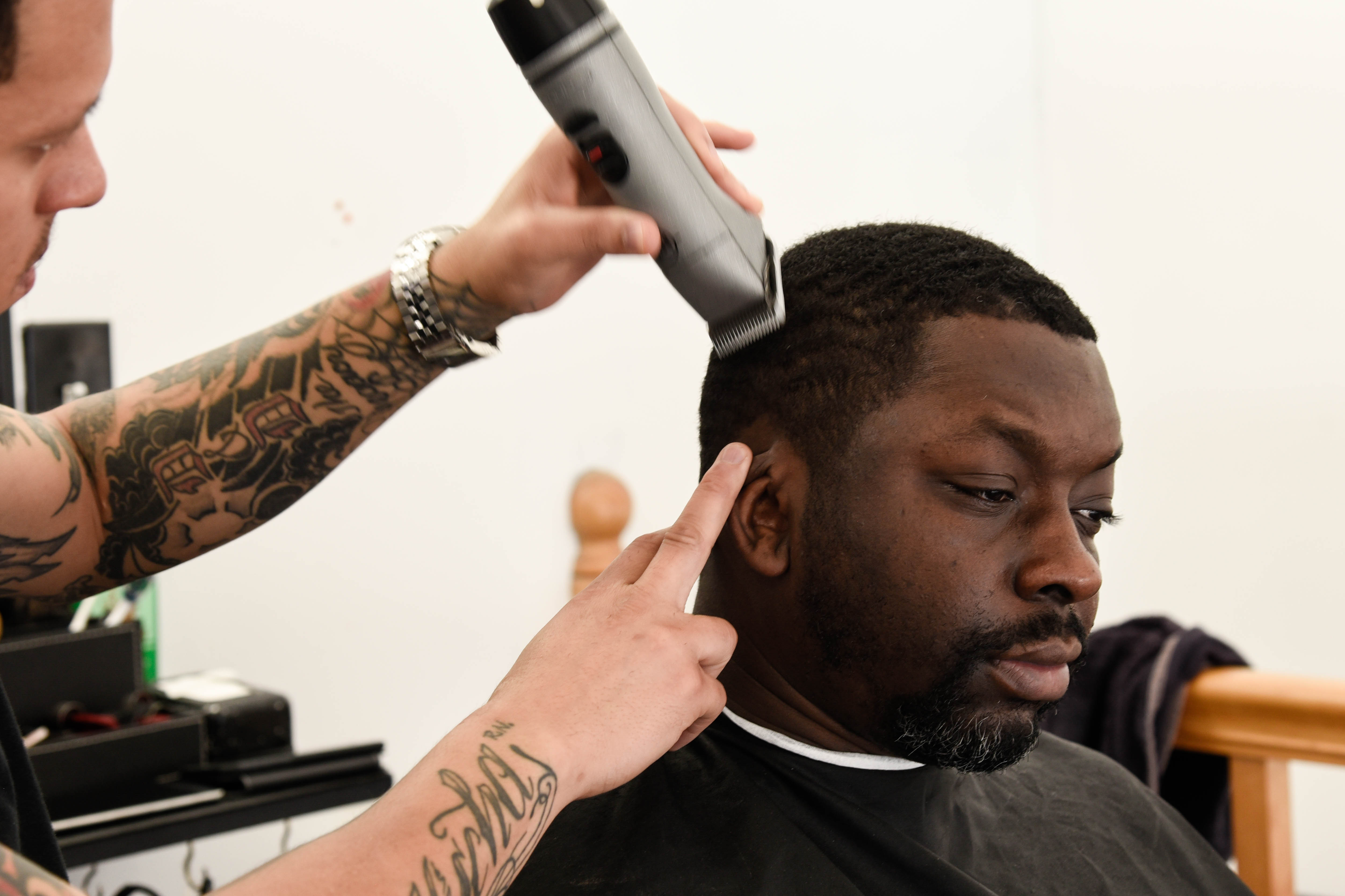 Cutting hair for athletes is something Choung never saw himself doing, but is like a dream come true. Most of Choung’s professional athlete clients come from the Philadelphia 76ers basketball team. He also has select players from other states.

Choung is thankful for how far he’s come but doesn’t plan to stop.

“When I started noticing that I was living my dream, it was a humbling experience because I know where I started from, I started in a basement … so to see where I come from it’s definitely humbling,” said Choung.

Choung is married with two sons, 12 and 17, and he recently adopted two of his nieces and a nephew. Choung explained, “My life is very full of children, but I enjoy it, I love it, that’s my family and I have to be there for them.”

Barbers Inc. is just the beginning for what Choung has planned.

“It’s just a little diamond in the rough,” he said. “I’m just trying to make it be noticed by the masses so I can branch off and start a franchise.”

Choung put emphasis on trying not to let other people do things for him, and how he’s always been the type of person to do for himself. 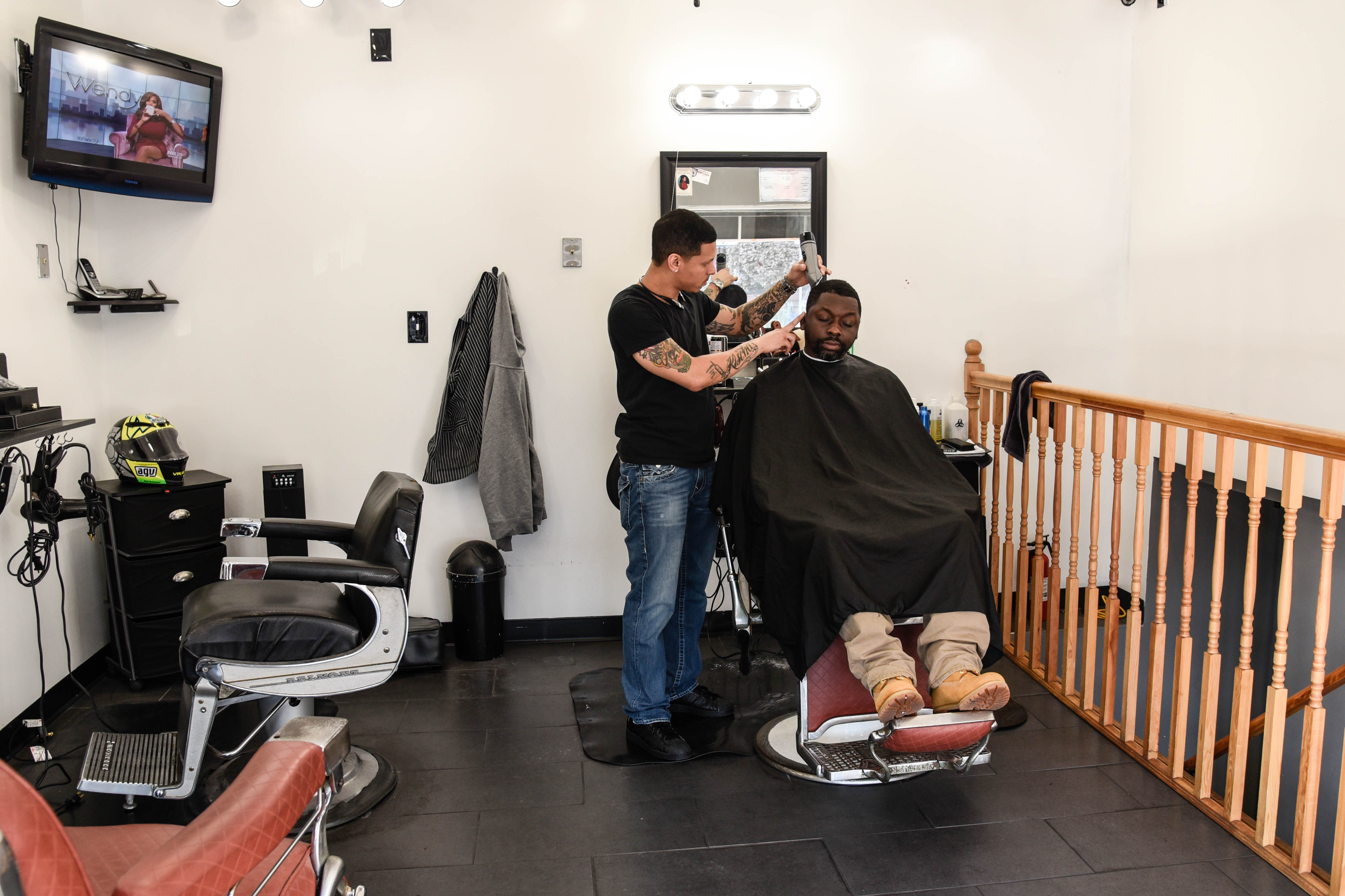 The barbershop is said to be a home for men, and Choung tries his best to make his clients feel that way.

“This is like my home,” said Ancrum. “On my days off, I may come here to hang out three or four hours and crack jokes.”

Client Keenan Bowland explained how he can always rely on this barbershop to get a clean cut.

“I like coming here because it is professional,” said Bowland.

Choung has no plans to leave the barbershop setting. 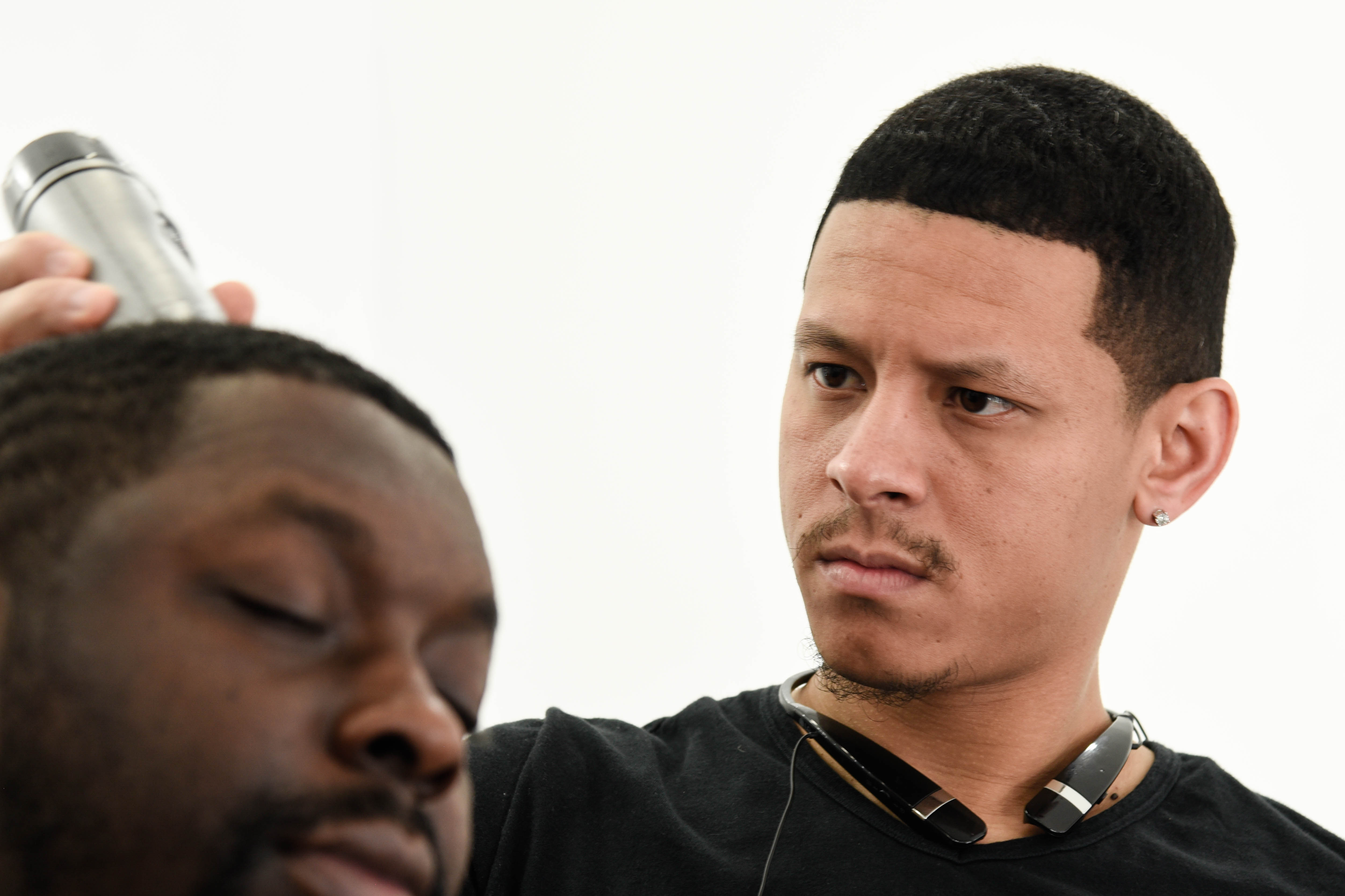 – Text, images and video by Phylandra McFaddin and Ramona Roberts

School closings. Drug activity. Shootings. Unfortunately, news outlets in Philadelphia often primarily focus on negative events in northwest neighborhoods Logan and Olney; they only have the time and space to cover the bad stuff. However, [Read More]

The Rev. Cynthia A. Jarvis has been the minister of the Presbyterian Church of Chestnut Hill since 1996. She has been a leader within her ministry changing the way people in Chestnut Hill view the [Read More]

Fishtown has been recognized as one of the hottest neighborhoods to live in the city. This riverward has a booming and hip arts, drinking and food culture. After eating a warm Bavarian pretzel at Stephen Starr’s [Read More]