The Italian culture associated with South Philadelphia may not be as visible as it once was, but what that culture represents is still alive and well in Joan Verratti, owner of Pollyodd, on Passyunk Avenue. While many small Italian eateries and other businesses make way for craft beer bars or small cafes, Verratti is pouring her own limoncello, an Italian dessert liqueur.

Pollyodd’s official journey began in 2008, but Joan Verratti’s road to becoming the first non-Pennsylvania Liquor Control Board retail store to have the ability to sell her own alcohol started more than a decade ago.

At 61-years-old, Verratti lived in South Philadelphia her entire life, and is just as comfortable overseeing operations in the distillery as she is in the kitchen making gravy and pizelle. She is the quintessential Italian matriarch, but after she lost her son in 1997, Verratti was left feeling aimless, and found some comfort in these old pastimes.

“I didn’t come out of the house for two years because I didn’t have my son, and I needed something to do,” Verratti explained. “So I started doing all kinds of things and, eventually, I found ‘cello.’”

Verratti grew up in the kitchens of Italian mothers, so when she came across an Old World recipe for Limoncello, altering the recipe to her own tastes came naturally to her.

“I found an old Italian recipe,” she said. “But I tweaked it to my palate, and that took me two years, to get the right match.” 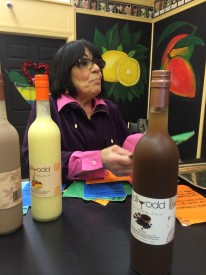 Limoncello is often overlooked in the world of spirits, mainly because it was never commercially available outside of Italy. So when Verratti started making the dessert drink herself, she saw not just a hobby, but an opportunity.

“After I got it right, I was giving it to everyone,” she joked. “It just got so out of control, every holiday. That was my thing.”

It was at this point that her fiancée, Tom Cavaliere, whom she calls her “partner in business, love, and life” gave Joan Verratti the push she needed. Together they formed the Naoj & Mot Distillery in 2006.

“She’s the salesman and she’s the face of the company,” he explained, while Cavaliere himself handles much of the production.

The company usually makes one flavor per day, from start to finish, unless demand calls for more.

That process, which must be completed each day, is entirely by hand at this point, from peeling the fruit to filling and labeling the bottles. Though both Cavaliere and Verratti admit that at some point a portion of the tasks may need to be more automated as the company and its production demand grows, as of now that is not needed.

What’s more important to Joan is remaining the face of the company and remaining in close contact with her customers, many of whom she sees as part of her family. While some customers travel from as far as Delaware to purchase limoncello, many are locals, like Michele Spadaccini, stop in just as much to talk to Joan as to taste her sweet cocktails.

“Everyone that walks by I wave to,” Verratti said. “You know, it really is a community in South Philly.”

That community helps her business grow, as locals come in for tastings and buy bottles as gifts for friends.

While Pollyodd’s business has been picking up, Verratti and Cavaliere are not in it for the money.

Much of the profits are used to give back to the community and help people, especially children.

“She can help other people’s sons and daughters,” Cavaliere said. “That means everything to her.”

Much of that help takes the form of the Thomas J. Verratti III Memorial Scholarship, named for Verratti’s late son, which goes to a student each year at Ss. Neumann and Goretti High School. Pollyodd and the resulting scholarship are also a way to keep Verratti’s son’s name alive.

“His name is clearly on the back of the bottle,” Cavaliere added.

The scholarship fund started with $40,000 Verratti raised in a fundraiser in 1999 and is maintained  by the proceeds from each bottle sold.

“Joan’s a mother,” Cavaliere said. “Even though she lost her only child, she’s still a mother. This gives her that purpose back.”

Verratti credits the success of her business to her son, explaining that “it is a labor of love” that she wouldn’t have gotten started with otherwise.

Cavaliere compared it to a silver lining, as Verratti seemed lost beforehand but now has been able to make the best of a horrible situation.

“You know, you can take the lemons so to speak, and you make limoncello,” Cavaliere added.

– Text and images by by Leah Ference and Josh Levy.

Since 1984, Philabundance has been operating out of South Philadelphia with one goal in mind: ending hunger in the region. Today, the nonprofit organization serves approximately 90,000 people per week. Glenn Bergman, a former health [continue reading…]