The work of Philadelphia painter Ameerah Khabir is both new and unexpected, with each piece containing messages within. Her latest solo art exhibit showcased paintings that incorporated the central theme of iconic 1997 film Love Jones. The film, by Theodore Witcher, presented love and romance between its two main characters, poet Darius Lovehall (Larenz Tate) and photographer Nina Mosley (Nia Long).

It is a film that inspired Khabir to research, educate and create. 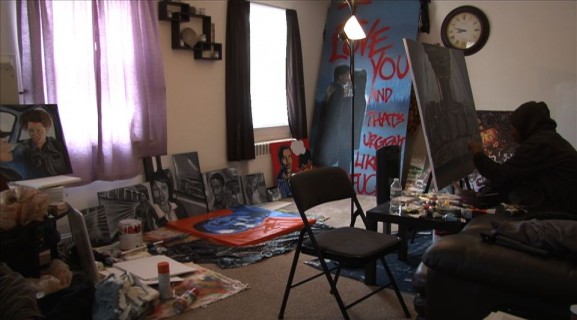 “The movie has an all black cast and I think it was one of the first films for my generation that saw black people in a non-stereotypical way,” Khabir said. “None of the characters are drug dealers or getting shot. Their idea of a good Saturday night was going to a poetry lounge and exchanging philosophies.”

“It’s important in terms of neo-soul black history,” Pinder said. “Events like poetry and spoken word are a side of African American culture you don’t see portrayed in the media.”

A native of North Philadelphia’s Hunting Park community, Khabir has been painting since she was seven years old. She attended high school at the Philadelphia High School for Creative and Performing Arts, where she was one of 200 students to gain admittance for visual arts studies. One of her biggest inspirations is Frida Kahlo, whose work she greatly connects with. 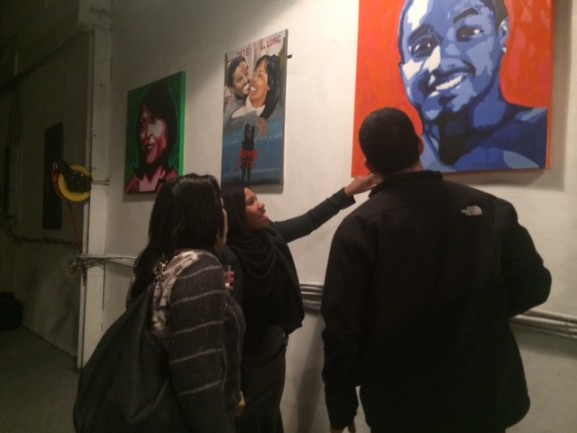 “A lot of her pieces were self portraits but a lot of them were very telling,” Khabir said. “If you look at her library of work she uses a lot of torturous ways to depict herself but they all depict where she was emotionally in her life.”

In addition to Kahlo’s work, it was childhood experiences that further contributed to Khabir’s artistic development.

“I really got inspired to paint when I was kid and my mom got me all of these fairytale books,” Khabir said. “It would be stories like Cinderella and Rapunzel but they were all from an African American standpoint. My parents were big on having me see figures that looked like me. The illustrations were gorgeous and it really inspired me to see if I could create something that beautiful.”

Khabir’s beginnings have led her to experiences that only a handful of artists will encounter. Her artwork has been collected by touring musicians, something she never thought would be a possibility.

“It all started kind of as a joke,” Kahbir said. “I was going to a concert and one of my girlfriends suggested that I paint something for the performer and see if I could get it to them. I tried it and it actually ended up happening. The first time that happened was with Drake, when he came after his debut album. From that I learned that you should always try, always see how far you can take it.”

Khabir is inspired by her surroundings and edits her work thoroughly. She admits that painting is the last step of that process.

“I’ll be in line at Target or something and I’ll think of a great idea or concept that can be expanded as a complete show,” Khabir said. “From there, it goes into researching, doing an outline as if I were writing a paper. I don’t want to produce something that is just pretty to look at. I want the audience to really be able to take something from it.” 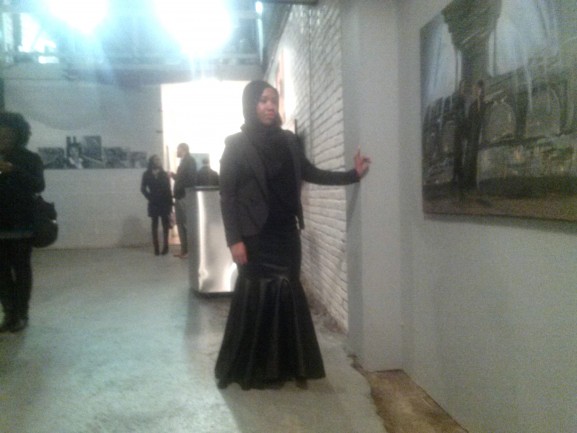 Khabir estimates that she has participated in nearly 50 art shows. These experiences have allowed her to understand the most important aspects of putting together an art showcase.

“I always want the art to be front and center,” Khabir said. “Some art shows I see start to become about the performers or the food or some other aspect instead of the work itself. I want to make sure the art is of a high quality so that people get their money’s worth.”

The quality of Khabir’s work wasn’t lost on those who observed it.

“It’s almost as if the paintings could feature anyone,” said Sally Nuamah, who attended the showcase. “It’s broadly symbolic for representations of black people – love and harmony. I think it does a great job of demonstrating that.”

In an effort to put a positive spin on black culture, Khabir wishes to change a common narrative. She wants to depict African Americans in positive ways and she believes that it is important for people to take notice.

“You can’t change history,” Khabir said. “It’s not something that should be forgotten. But I think it’s time to start depicting African Americans in different ways. I’m trying to do my part as an artist to show other things that black people are historical for other than slavery. It’s time to share some other stories.” 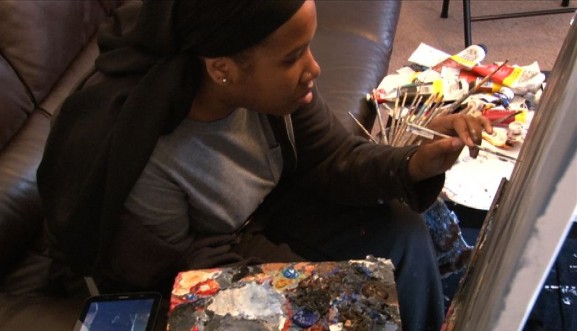 – Text, images and video by Deneia Washington and Patrick Smith.

Philadelphia Neighborhoods has launched three new websites to focus on specific communities. Following are the new online editions, which will have news and information from these neighborhoods: These include: The Fairhill Times at www.fairhilltimes.com The [Read More]

The word of God wasn’t the only thing heard at St. John’s AME Church. Councilwoman Maria Quinones-Sanchez, as well as the rest of the City Council members, traveled to the church located at 2114 S. [Read More]

Kristen Schier wears a lot hats. She currently works as the improv producer at Philly Improv Theatre, the artistic director for The N Crowd, as a senior lecturer at The University of the Arts and [Read More]