Since 1979, St. Francis Inn Ministries has been providing services to residents and homeless individuals in the Kensington area. For the most part, St. Francis Inn, which is in cooperation with Project HOME, is a soup kitchen which offers up to two meals to those in need. The kitchen does not turn anyone away, seeing up to or over 450 citizens each month. 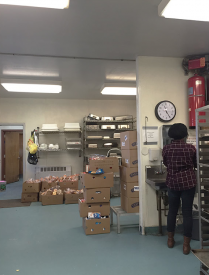 group effort than one led by one individual member. Duffy referred to himself as “just one of the bunch.”

“We don’t have a head or a director,” Duffy explained. “We have what we call a team. Every Monday, we gather together in the morning and make policy decisions and assign jobs.”

St. Francis Inn has had quite the turnaround since it first opened in 1979.

According to Duffy, economic issues are to blame for how many people they now see per month.

“[D]uring the era of the trickle-down economics … the rich were given tax breaks that they said would trickle down to the poor and help them out of poverty,” Duffy said. “I guess it didn’t trickle anywhere because our numbers kept growing and growing.”

Barbara Salapek, a team member at St. Francis Inn, has been working there for 25 years.

“The Inn gives people around Kensington a sense of consistency and stability in the neighborhood,” Salapek said. “We serve all people, we don’t require IDs. We are primarily a soup kitchen and we serve all day, we never close.” 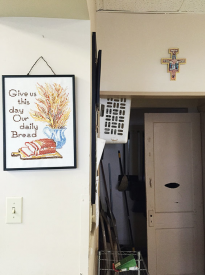 While St. Francis Inn does primarily operate as a soup kitchen, the team members also work to help those in need as possible.

“We have a phone that people can use,” Salapek said. “We have an office with resources to be able to direct them with what they need. If someone is looking for shelter, we tell them who to call and what to do. People that come here also have the opportunity to get toiletries from us three times per week and any baby food whenever they need it.”

In an effort to continue serving the community, Salapek said that St. Francis Inn also has branches that include an urban center, which provides social services to families in need; a women’s center, which allows struggling women in the area to find comfort in one another; and a thrift shop that their visitors can obtain clothing vouchers for.

With all of the good that St. Francis Inn has done, it is not surprising that its work has generated interest from individuals that do not live in the area, such as students from universities on spring break mission trips.

Victoria Sanon, a 21-year-old from the University of Georgia, explained that her school’s Catholic center offers a multitude of trips, and she chose to come to North Philadelphia.

“I didn’t really know what we were going to do here, but we just got here and we’ve already served main dishes, made the food, and cleaned up the space,” Sanon said.

Another student from the University of Georgia, 18-year-old Claire Bertram, saw the experience as better than what other students may get to do over spring break. 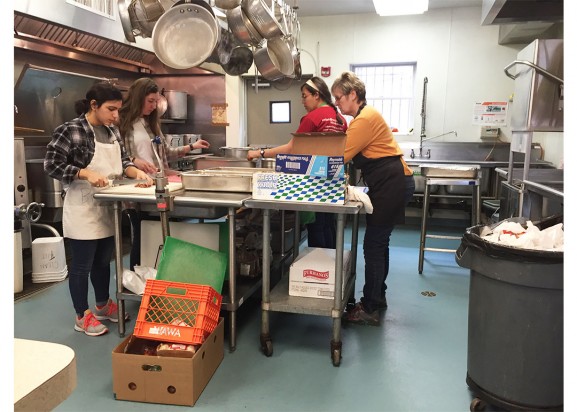 “They call it an ‘alternative spring break’,” Bertram said. “I chose this one basically because I really enjoy service trips. I can go to the beach any time I want. This is a year that I can do something different.”

One of St. Francis Inn’s most generous services is one where needy families sign up for Sunday food deliveries.

“Since I’ve been here, the coolest thing I got to do was go on the deliveries,” Bertram said. “We delivered boxes of food to families. We didn’t get to interact with them much, but they seemed very grateful for the deliveries.”

St. Francis Inn does provide services for those living on the streets and in impoverished home conditions, but it also assists those who travel and the elderly.

“People think of us as a soup kitchen for homeless people, but I think we see more of the ‘hidden homeless’: the people that travel and are transient from place to place,” Salapek said. “Our growing population is senior citizens. They tend to live in substandard housing or are unable to cook for themselves, so they come here.”

What the team members at St. Francis Inn see is that they are heavily depended upon by the people who visit.

“The neighborhood sees us as a safe haven and a place that they can get a meal,” Salapek said. “They know they never have to go hungry and they can eat whenever they need to.”

– Text, photos and video by Sabrina Iglesias and Clayton Russell

https://vimeo.com/38471592] Chick-Fil-A kitchen manager Christina Tovar takes great pride in her work. A mother of three, she represents the many low-income families who are finding jobs in Kensington due to the many developments and businesses [continue reading…]

Walking throughout the old streets of a neighborhood that residents consider one of Philly’s finest, it is hard to ignore the presence of hard work and generosity that beams off locals. Port Richmond, a small, [continue reading…]