Golf’s popularity has taken a hit in recent years. Courses around the world have been forced to try and find ways to bring people back and increase sales. Enter foot golf, a blend of soccer and golf that has caught the attention of the younger generation. Cobbs Creek Golf Course recently built an 18-hole foot golf course that is set to officially launch its first full season in the spring of 2015.

The next time you set out for a round of golf, don’t be surprised to hear someone shout out “fore” to only see a soccer ball sailing right towards you.

Several years ago, the aforementioned situation would have sounded ludicrous, but nowadays, more and more golf courses all across the world are bringing the soccer pitch to the golf links, in a sport called foot golf.

Foot golf is exactly what it sounds like. It’s a blend of golf and soccer, played with a regulation size soccer ball with shorter holes directed towards soccer players. There are par-3s, par-4s and par-5s, and players must try and kick the ball once it comes to a complete stop into a 21-inch diameter cup in as few of strokes as possible. The holes at Cobbs Creek range anywhere from 60 to 250 yards. 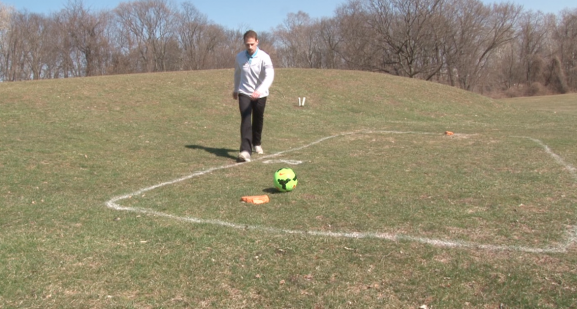 Cobbs Creek is home to two courses. The Olde Course, known as the “crown jewel amongst Philadelphia’s courses, having  been nationally ranked as the #6 Best Municipal Course in by Golfweek Magazine” and the Karakung course, an underutilized course that is a step down from the Olde Course.

According to multiple studies done over the past couple of years, golf’s popularity is tanking. 4.1 million people decided to drop the sport in 2013, which has caused golf sales to plummet and golf courses to throw its clubs in the trunk and call it quits.

This has forced courses and country clubs to get creative, which is what Cobbs Creek Golf Course did in 2014.

Cobbs Creek installed an 18-hole foot golf course on the Karakung Course in hopes to increase sales, the popularity of the sport and bring people back from the declining numbers golf has suffered in recent years.

“Golf has been kind of been in a slump lately,” Cliff Easum, the general manager at Cobbs Creek said. “We need more rounds. We’re really kind of at the point where we’re losing more people than we’re kind of gaining. Foot golf might just be one of the things that helps us.” 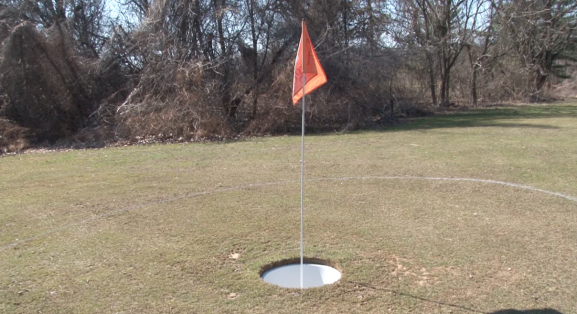 “It favors the long-ball just like golf,” Easum said. “The further you can kick it off of the tee, really the better chance you have of getting it to the hole.

Golf’s popularity has decreased in part because of the high costs and the amount of time it takes to play a round, but foot golf moves along at a more swift pace and for $18, players can rent a ball, rent a golf cart and play 18 holes. Prospective players are allowed to bring their own balls as well. In terms of foot wear, spiked cleats are prohibited, but sneakers and indoor soccer shoes are allowed.

“We’ve been doing it for about half of year now and haven’t had any troubles at all. So you just make a regular tee time like you do golf and play right along with golfers. Out of a entire whole half of year of doing it so far now, I haven’t had any problems or really any complaints. It’s just been perfect actually.” 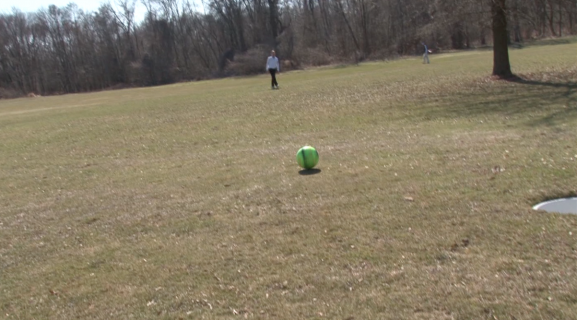 Due to the harsh winter, the course wasn’t able to be worked on consistently until the end of March. Cobbs Creek had a soft opening last year, but this spring is the first official kickoff of foot golf, given that 2015 will be the first full season. The reaction so far has been very positive, especially for the younger generation.

“We’ve done dozens of soccer team parties, birthday parties,” Easum said. “We’ve had a lot of kids. That’s really the best part. Introducing a lot of kids to the game and obviously potential golf further than that. [We’ve introduced] a lot of adult soccer players and people who usually don’t play golf that play soccer. Those are some new customers. The best part is the families and the kids.”

Golf as a whole needs something to bring people back and foot golf may be what lures people back. Cobbs Creek hopes so, too, and it’s off to a good start.

– Text, video and pictures by Chase Senior and Nick Gomberg.

Josh Verlin, the owner of City of Basketball Love, can often be seen frantically scribbling notes as he scouts high school basketball talent and conversing with coaches gauging their interests in prospects. There are only a […]

Kensington: Rise and Fall of the Housing Market

The Kensington housing market has been fluctuating throughout the past few years due to an influx of artists, new families and businesses moving in and various others moving out. Just what is bringing people in, […]

West Philly: Stanford Thompson, The Man Behind ‘Play On, Philly!’

https://vimeo.com/80979879] Stanford Thompson is a tender 26 years-old but has already established a program that is trying to change music education in the city of Philadelphia. With Play on, Philly!, Thompson is combining his education […]