The building, located on a quiet street in Olde Kensington, looks desolate and bare on the outside. But it’s what’s inside that makes this place different from the other ones on the block.

During an early April morning, Brodie Hylton of the Philadelphia-based Bicycle Transit Systems walked toward the front door. He was not sure of whether it would open, or if he would need to go through the location’s alternate entrance.

On this occasion, though, the door opened.

A faint noise, perhaps drilling, could be heard upon entering. A sliver of bright blue, perhaps metal, could be seen from this spot as well. Hylton walked through an unfinished hallway, decorated only with evidence of construction, and into the expansive space in the back. This is where the noise was coming from – and this is where the sliver of blue could be found.

This is where Indego, Philadelphia’s bike share system, was born.

Under bright lights hanging from the ceiling, a team of workers assembled rows upon rows of bicycles, each one taking up to two hours to completely put together. The group was hard at work to meet its deadline, and time was of the essence at this point.

On April 23, that deadline arrives and Indego will launch in areas all throughout the city – including three stations south of Washington Avenue and west of Broad Street (Point Breeze Avenue and Tasker Street, 18th and Fernon streets, along with 18th Street and Washington Avenue).

Hylton, the marketing manager of Indego, said these first few weeks will be important in assessing how the program operates long-term.

“Our expectation,” Hylton said, “is that because a program is launching from nothing, it will take a couple of months to get the traction where we’re seeing regular and frequent use of all the bikes and stations across the system.” 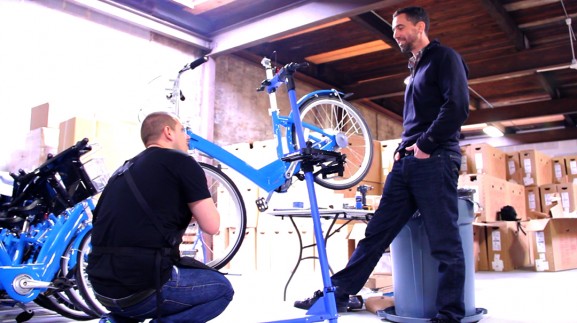 “But I do think within a very short period after launch, especially as we’re rolling into the warmer months of the year, that utilization will pick up pretty quickly,” he added. “That’s our hope and expectation.”

Jake Siemiarowski, a mechanic constructing many of the bicycles, said Indego will feature about 500 bikes upon launching this week. By next week, a full slate of 700 should be out and available for use.

Siemiarowski and his fellow mechanics are responsible for unpacking the bikes, removing the packaging materials, attaching the front wheels, adjusting both brakes, installing a front basket, hiding the wires by adding a shroud and, finally, testing them out to make sure each one is ready for use.

In Point Breeze specifically, a neighborhood of focus for the Indego planners, those championing the system are hopeful that the program’s introduction in the area will give it new life. 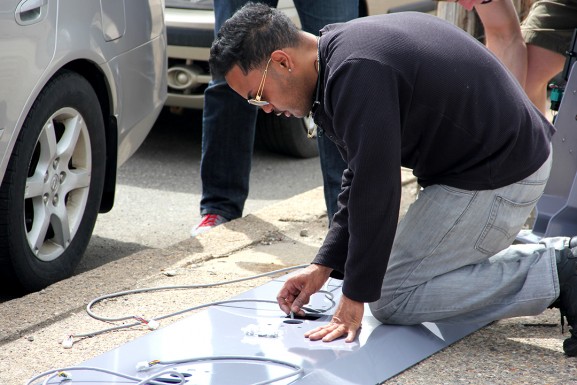 “A lot of people may live in small homes, or it’s hard to store it, or the cost of a bicycle might be kind of high, there’s all a number of reasons why someone might not want to own a bicycle,” said Katie Monroe, bike share outreach manager for the Bicycle Coalition of Greater Philadelphia. “So this is something for Point Breeze that can help connect the neighborhood to other places, offer another transportation option, offer an option for a healthy way to get around – a way to get some physical activity into someone’s day-to-day life.”

The launch of the new bikes is gaining recognition from many throughout the area. Councilman Kenyatta Johnson, who is running for reelection in the 2nd District, invited supporters to ride with him on Thursday, April 24, from Eakins Oval near the Philadelphia Museum of Art to the Indego station in Point Breeze.

Hylton, while standing in the warehouse surrounded by long and stacked rows of cardboard boxes, said much of Indego’s appeal simply lies in its convenience.

“I think it’s a really great opportunity for residents in these neighborhoods to be able to connect,” he said.

Indego Ambassador and Point Breeze resident Kim Smith said she wants to “bridge the gap” between longtime neighbors and new ones. Monroe, also a resident of Point Breeze, said she believes working with leaders in communities throughout the city will be essential in achieving that goal.

“Point Breeze is rapidly changing, [but it’s] not the only neighborhood that’s rapidly changing,” Monroe said. “Our hope is that this will be a resource for all residents. Residents that have been here for a long time and newer residents, and that this can be something that people come together around.”

Indego: How Does it Work?

Aaron Ritz, bicycle programs manager in the Mayor’s Office of Transportation and Utilities, remembers a meeting a few years back in which names were being kicked around for the bike share system.

Eventually, the word “Indego” – a play off of the word “go” and the sponsor, Independence Blue Cross – was brought up. 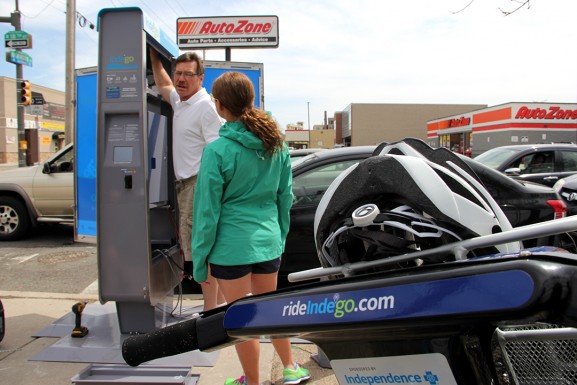 “That’s the winner,” everyone in the meeting thought, according to Ritz’s account.

“It’s a great name that represents the city of Philadelphia,” he said. “Independence Hall, the independence of riding a bike and the ability to just get out and go.”

The total investment of the bike share system is about $5.5 million – money coming from a handful of grants and funding from the city – according to the Mayor’s Office of Transportation and Utilities. The sponsorship by Independence Blue Cross, in addition to future revenues obtained from users of the system, are expected to support Indego’s operations for the foreseeable future.

The city owns the system, Independence Blue Cross sponsors it and Bicycle Transit Systems operates it. The bicycles themselves are manufactured by BCycle, which specializes in equipment geared toward bike share systems.

Indego is slated to operate 24 hours per day, every day of the year. For residents, there are three different options: Indego30, IndegoFlex and WalkUp.

The Indego30 option, which costs $15 per month, includes unlimited trips lasting up to an hour and $4 per hour after that initial 60 minutes. The IndegoFlex plan is a $10 annual membership that costs $4 per trip lasting up to one hour, and $4 after that hour. For residents not wishing to be enrolled in a plan, the per-trip option allows non-members to use a bike for $4 per 30 minutes.

Stations like the Point Breeze location were chosen after a long period of planning and brainstorming. Cara Ferrentino, manager of strategic initiatives for the Mayor’s Office of Transportation and Utilities, said an initial mapping exercise took place where the planners thought of locations that bike stations might be the most useful. One hundred potential locations were picked.

Then, those locations were made public through an online map. Colorful red stickers were also placed at the potential locations, containing a number for which residents could text in their opinions. Around 10,500 responses later, the survey data was narrowed down.

“From that point, [we] began working with specific property owners and Parks and Rec on site selection … also throughout this whole process I’ve been doing many community meetings and attending community events to get specific feedback on locations,” Ferrentino said. 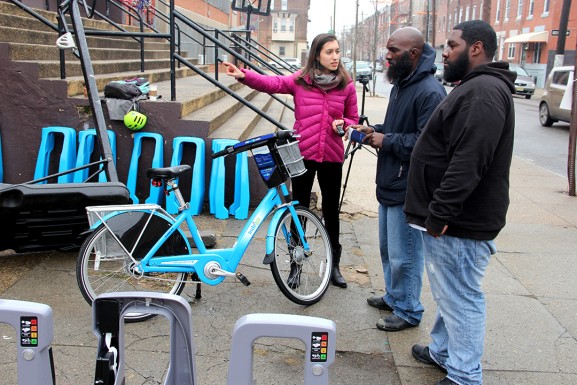 There are more than 60 stations, “based on proximity to community resources, employment centers, bike infrastructure and transit in consultation with partner agencies, institutions, community groups and the public,” according to Indego’s website.

The site also recommends that users bring a helmet. Indego members are eligible for discounts on helmets at select retailers.

The Philadelphia Bike Coalition is, what Ferrentino calls, “our partners in outreach.” The city itself is the “planner and owner of the bike sharing equipment,” Ritz said.

Brodie Hylton, Indego’s marketing manager, said the system being implemented in Philadelphia is definitely modeled after other similar programs throughout the country – including ones in Washington and New York.

But there are some differences, at least in its intention.

“We’re doing a few things differently in Philadelphia,” Hylton said, “one of which is this particular effort to reach neighborhoods that are historically underserved, and trying to create this as a very viable transportation option for those neighborhoods.”

“We’re trying to be broad-based in what we do,” said Carniesha Kwashie, a grant manager for the Mayor’s Office of Transportation and Utilities. “We’re not going to be the first bike share system in the country … but we have a great opportunity to learn from the experiences of other cities.”

Kwashie added that learning from other cities has been instrumental in the development of Indego, noting that Philadelphia is a member of the North America Bikeshare Association. 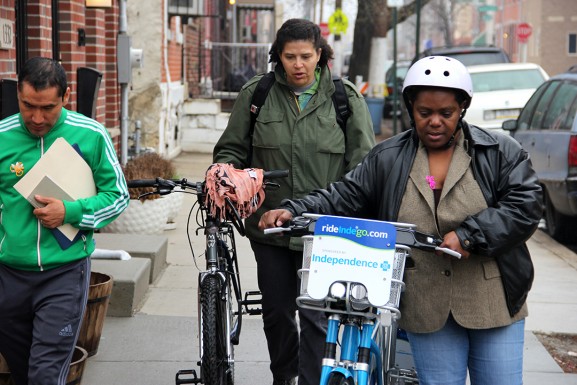 One of the first meetings held between the Mayor’s Office of Transportation and Utilities after the Indego deal was secured was with SEPTA. The two systems are not competing with each other, Kwashie said, adding that they’re “friends.” Instead, SEPTA was used as a building block in the planning of bike share locations.

Last week, the station in Point Breeze and others throughout the city were being installed and finalized. On April 23, they are expected to be ready to go.

Many hold high expectations that the launch will be a rewarding one.

“We have the most experience of any team in the U.S., easily, and we’re proud just for this to be our first largest launch here,” Hylton said. “Being headquartered in Philly, it’s a great benefit to us to have a team here on the ground and have our hands on this together to make sure it’s a success.”

–Text, images and video by Avery Maehrer and Dustin Wingate.

Tonetta Graham grew up in Strawberry Mansion at a time, she says, when community and togetherness were emphasized in the neighborhood. She remembers scrubbing the white marble steps outside her home every Saturday, which she [continue reading…]