The Union League of Philadelphia has always had ties to the military, beginning with its inception in 1862 to support Abraham Lincoln and the Union. The elite, members-only club is continuing this tradition through its Veterans Initiative, which launched in March.

Earlier this year, Union League member and Army veteran Mary Hagy got together with fellow members to discuss ways to help veterans and their families in the Delaware Valley. What was conceived was the Union League Veterans Initiative, a program with the goal of lowering unemployment among veterans by utilizing the club members’ relationships with large businesses.

“We’re matching up our Union League businesses, which are the leading businesses in the region, with veterans and family members who need jobs,” Hagy said.

The Union League has nearly 3,500 members, many who are prominent leaders in the area. The Veterans Initiative is making these connections through an online portal, where employers can post jobs and veterans can search for openings. Hagy said that interest in finding employment is high among veterans.

“We’re receiving overwhelming applications from veterans who want to go to work for our businesses,” Hagy said.

“The Union League will consult with us, send us job leads,” Wardlaw said. “At that point, the Department of Labor or the Veterans Employment and Training Service is able to work with the states in making sure that those jobs leads get placed into the system.”

Wardlaw added that there’s a system in place to track the veterans through their employment process and therefore measure the success of the program.

In addition to the job portal, the Veterans Initiative provides educational outreach and hosts job fairs. The Union League hosted a job fair at its historic South Broad Street building last month. Representatives from 53 companies, from Comcast to Uber, provided information to veterans about employment opportunities at the first event run by the Initiative.

Helen Jackson, a human resources associate at the Philadelphia International Airport, attended the event to connect with veterans

Mike Maher, the chair of the Union League job fair, said the event took three months to plan – a timeline he described as condensed. In addition to the networking opportunities, the job fair offered one-on-one, 20-minute career-coaching sessions and free suits from Suiting Warriors.

“We’re really, really fortunate to have this thing all come together in such a short period of time,” Maher said, “but as you can see, I think there’s a lot of potential for growth as well.”

City Councilman David Oh, an army veteran, attended the event and spoke on the importance of hiring veterans in Philadelphia.

“So many times, people hear about veterans in a negative context and that is important if we are going to address these problems and ensure that there are positive social changes,” Oh said.

Hagy said she hopes the event has a two-pronged effect – decreasing homelessness and making sure veterans succeed in their new jobs. 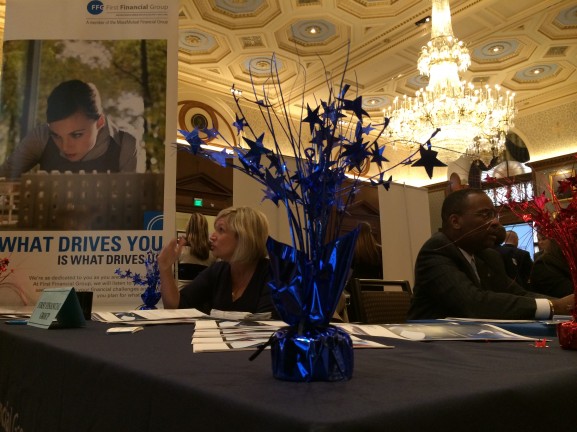 “Our goal here is not only to drive down unemployment, because hiring veterans is a really important to do,” Hagy said, “but also the really critical aspect of effectively employing them once they come on board. So, it’s a holistic kind of approach to making sure that our military members who have served in defense of the country now transition that success to civilian life.”

Homelessness among veterans in Pennsylvania is far from a new issue. According to a 2013 report by the U.S. Department of Housing and Urban Development, there are 1,462 homeless veterans in the state.

In addition to lowering the homelessness rates, Wardlaw said businesses can benefit from the desirable professional qualities of veterans.

“A veteran is always a good employee because a veteran is in a lot of cases trained,” Wardlaw said. “They’re disciplined. They already have skills that are required for most employers.”

Wardlaw said that as of late October, 105 jobs have been posted to the Veterans Initiative portal and that the Union League was beginning the process of setting up interviews for the veterans, which could lead to employment.

Maher said that the Veterans Initiative is highly reflective of the club’s motto – “Love of Country Leads.”

While he was pleased with the turnout of the initiative’s first major event, he said the work is far from over.

“This is just the tip of the iceberg of what we’re looking to do,” Maher said.

As the two Presidential Candidates, Donald J. Trump and Hillary Clinton, prepare their last few arguments in the campaign trail, party representatives throughout the nation prepare for the outcome on November 8th. This year’s general [Read More]

Germantown: Remembrance Of An Historical Battle

Every year, on the first Saturday of October, Germantown has one of its biggest events – a reenactment of the famous Battle of Germantown on the very grounds the battle took place 237 years ago. [Read More]

The Mt. Airy Art Garage (MAAG) is a community organization unlike Daisy Juarez has ever been involved in.
“We have visual arts, performing arts, literary arts, we even have a quilting club,” she said. “It’s a multifunctional garage.”
Juarez became a member last year after moving to Philadelphia. An artist herself, Juarez said she was looking to join an organization similar to the watercolor society she was part of in Illinois – a group where she could connect with fellow artists as well as with the community – luckily, she discovered the Art Garage.
“We’re really all about community and creativity,” said Linda Slodki, president and cofounder of MAAG. “Our goal is to bring artists out of isolation.” [Read More]