Anyone with a competitive side to them likely fills that need for competition through playing sports.

The same holds true for the visually impaired.

The Blind Sports Organization (BSO) in Philadelphia provides the city’s blind and visually impaired community with numerous organized activities and ways to get involved but some people want to compete at a higher level. Through sports such as Goalball and Beep Baseball, Philadelphia’s blind athletes are given the opportunity to compete at a local, national and sometimes Paralympic level.

Some sports were brought to Philadelphia from other blind communities in the United States to make sure that all visually impaired people had recreational opportunities.

“In 1982, I went to Dallas for my job and I found out about Beep Baseball,” recalled Greg Gontaryk, a longtime blind sports athlete. “Played a couple of innings down there, brought it back to Philadelphia and we have had this since ’82. There have been a couple years that we didn’t have a team but for the most part, we’ve been in operation since ’82.”

While a sport such as Goalball was created specifically for the visually impaired, other sports, such as Beep Baseball, have been adapted from a major professional sports so blind people can play.

As in Goalball, Beep Baseball players wear blindfolds so that no matter the level of visual impairment everyone is on an equal playing field. The key in Beep Baseball is the timing between the batter and the pitcher. The pitcher is on the same team as the batter and doesn’t try to strike the batter out. The team practices timing with the pitch and the swing to score as many runs as possible. The ball used is a similar size to softball and is tossed underhand.

“Ready, set, pitch,” is called out to tell the batter when the pitcher will release the ball. Before he or she does, they activate the beeping sound inside the ball, which helps the batters and the fielders to track the ball. 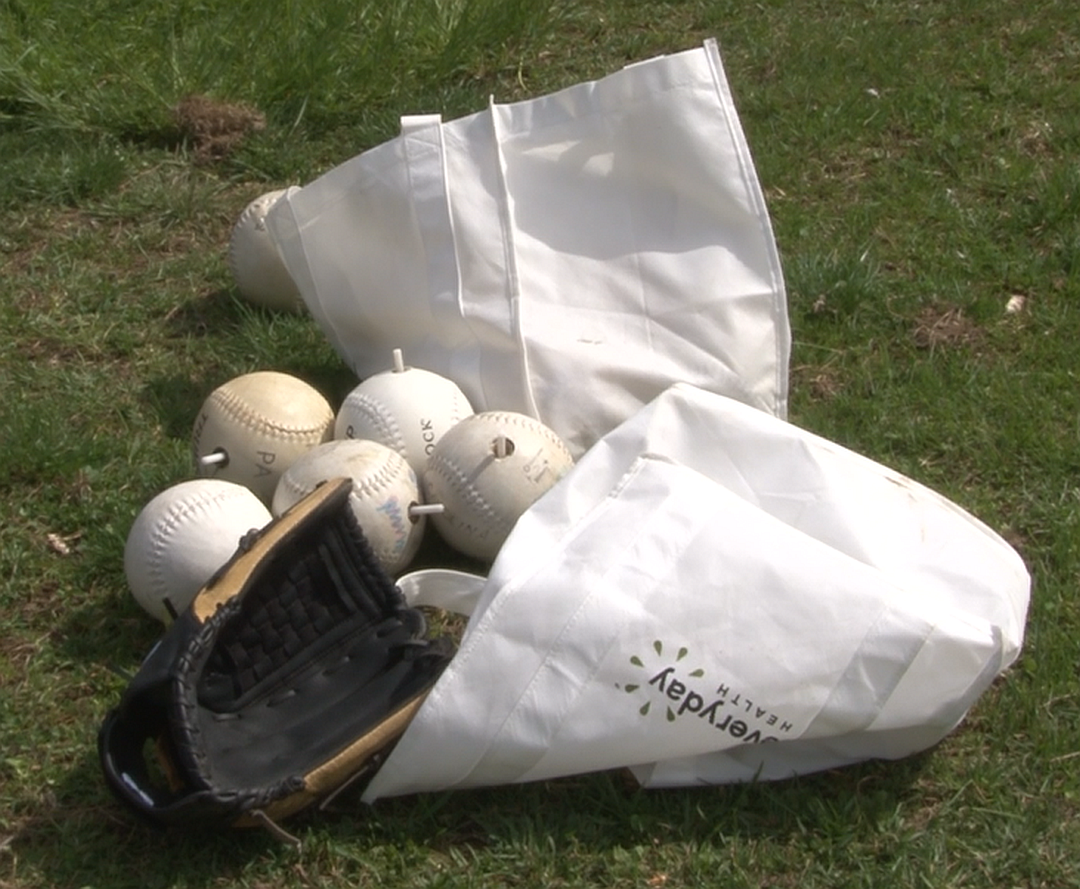 Before each pitch, a tone will sound from of the two bases and the batter must run towards whichever base they hear the sound coming from. The bases are similar to soft tackling dummies. In order to be safe, the batter must touch the base in some manner before a fielder has control of the ball. If the batter is safe that counts as one run for their team.

There are six fielders, all in the outfield. Each team will set up their fielders in a different grid, covering the width of the field and having fielders at different depths of the field. Sighted spotters call out the designated number and side of the field the ball is hit to so the fielders can react. To record an out, they must recover the ball and show they have control by raising it and yelling “up” before the batter touches the base.

“Watching the interaction between the players on defense amongst themselves is not something that is readily coachable,” said Bob Gomberg, head coach of the Pennsylvania Wolfpack, the Beep Baseball team from Philadelphia. “Each player has to learn in their own way, how to cover their position and how to go side to side. In Beep Baseball, if you go forward, there’s going to be a collision and there’s going to be an injury. So, teaching the guys to stay in their lanes is much more important in Beep Baseball than in regular baseball.

Beep Baseball is one of many blind sports that requires great skill. While BSO maintains a sense of community and fun throughout all its sports, the competitive spirit truly isn’t lost on their blind athletes.

“The York team is not competitive,” said Casey Bahn, a former member of York’s Beep Baseball team who now makes the long commute to play with the Wolfpack. “They don’t have a market of other teams around us at all and they don’t travel. I wanted something more competitive.”

The Wolfpack, which Bahn calls “Pennsylvania’s competitive team,” has come a long way from where it started and the players have lofty goals for the upcoming season.

“The most rewarding part about coming out in the season is watching the progress that all players are making,” said Gomberg, who expects his team to contend for the Beep Baseball World Series this summer. “I still remember the first couple years coaching for the Wolfpack. We would go a season without winning a game. We would go games without scoring a run. We finished last season at 3 and 3 and beat teams handily that we had never even come close to beating before.”

It’s the help of volunteers such as Gomberg and the passion and dedication of both old and new members, like Gontaryk and Bahn, that allows BSO to continue to be able to provide Philadelphia’s blind community with competitive and recreational outlets.

“Just come out to the different sports and see how you like it and see if you want to get involved with it,” Gontaryk explained, about what he would say to any blind people who aren’t already with BSO. “They have Goalball, which can be a full-fledged activity. And if you also play just recreationally, you can do that also. But if you really want to get involved with athletics on a serious basis, you can play Goalball, baseball or whatever else they have available.”

On a chilly Saturday morning, Dec. 1, parents and children gathered in the visitor center at the Schuylkill Center for Environmental Education, located at 8480 Hagys Mill Road. While they waited, the children explored the [continue reading…]