From the turf field at 11th Street and Cecil B. Moore Avenue, one can hear the high-pitched frequency of whistles blowing mixed with the unmistakable sounds of coaches yelling as the St. Joseph’s Prep lacrosse team practices.

The time is now 5:30. Practice is almost over with only 30 minutes remaining. Head coach Andy German is having the team run six-on-five offensive vs. defensive drills. This part of the day is almost routine for the players.

With the coaches standing amongst the first line players, the rest of the team stands back on the near 45-yard line watching. Most of the drill goes as smoothly as a practice drill can go, until the one play that ends the drill.

The players pass the ball in a continuous circle, avoiding the defensive players. When one of the players sees an opening, he takes it. Cutting around the first defender, the second player in the black defensive pinnie attempts to fill the gap.

As the player with the ball charges, he lowers his head in a bull-rush fashion. The two players collide head-to-head and a loud boom fills the air. The defensive player drops to the ground, holding his head.

Paul Burille, the team’s athletic trainer, jogs over to the fallen players and has him remove his helmet. Getting him to stand up, Burille begins to examine him and administers a concussion test.

“Follow my fingers,” he says, moving his fingers up and down, left to right. “I’m going to give you five words. Repeat them back to me.”

He gives the player five words and he repeats them back.

“We’ll come back to that,” Burille says. “I’m going to now say five numbers in a random order. Say them back to me.”

Again, the player recites the numbers without a problem.

“Okay, now say them to me backwards,” Burille continues.

Burille goes back to the five words and goes through some more steps. The player passes the concussion test but he is done for the rest of practice.

“Not a concussion,” Burrille says in passing. “That could have been a lot worse.”

This is Burille’s first year as St. Joseph’s Prep athletic trainer as part of an outsourcing program run through Temple University Hospital Orthopedics and Sports Medicine. He also completed an internship with the NFL’s New York Jets. 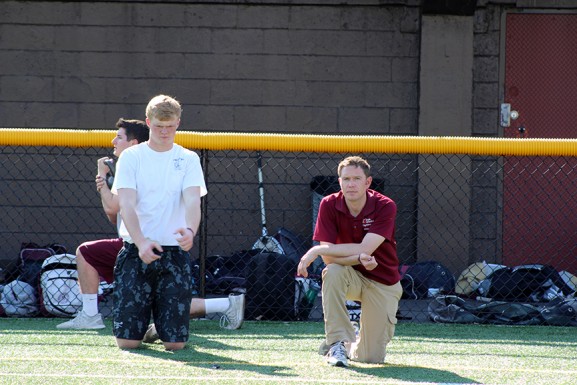 Burille said that aside from the obvious of the professionals being bigger, stronger, and faster, one of the main differences between an amateur athlete and a professional one is how well they know their bodies.

“That the pros know how to take care of their bodies better,” he said. “Professionals – and especially veterans, know when they need ice, [electric] stim or things of that nature. Amateur athletes, especially at the high school level, don’t know those things.”

According to the Center for Disease Control (CDC), an estimated 173,285 people under the age of 19 were treated in hospital emergency rooms for sports related concussions between 2001 and 2009.

“In my practice, I see a lot of younger athletes as well [as college athletes] and I tell them that they aren’t paying you enough to pay hurt,” said Cory Keller, one of the team physicians for Temple University Athletics.

“It’s different when you’re talking about someone in the NFL who made a lifelong decision to play and make a career out of it, than a 14-year-old who plays three sports a year for fun that is going to grow up an be an accountant. It’s not really comparing apples to apples.”

As awareness for concussions has evolved and grown, so too has the methods for detecting them.

Five years ago, Burille said that the only method used was a SCAT Sheet. The sheet, listing the different signs and symptoms of a concussion and different coordination tests, graded concussion on a three-level scale – the higher the number, the worse the concussion. If a player was found to have a concussion, then that player would sit out until the symptoms went away.

That evolved into a return to play protocol where a player’s physical activity increased over a five-day period to determine if they could handle the activity. If not, then the concussed would return to stage one and repeat the process.

Now, with the advancement in computers, software known as ImPACT has become one of the main ways to detect concussions. Prior to the start of a season, players are required to take a test that determines reaction time and memory function.

“The ImPACT test does much more than just the sideline assessment,” Burille said. “It can measure [a player’s] ability to remember shapes, letters, numbers, colors, order of things in multiple different dimensions and based how they do on the test, you can determine what kind of concussion they have.”

According to ImPACT’s website, more than 10,000 medical professionals have been trained by ImPACT on concussion management with more than 7,400 high schools, 1,000 colleges and universities and 200 professional teams using the software. 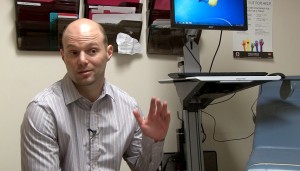 “The test is one of more common ways to look at the injury objectively,” Keller said. “An athlete might think he’s fine, but we can show him the results of the test and it could say something different. Now, that being said, the computer test isn’t always 100 percent right and you just have to take it with a grain of salt. It’s one piece of the puzzle.

“You almost don’t know what a concussion is like until you go through one and realize how uncomfortable it actually is.”

Foster Trophy and Awards Co. has been located in North Central since 1968 where it was first established by William Foster’s parents.  The business is the third oldest on Cecil B. Moore Avenue and located at 1718 [continue reading…]

Temple University reporters will be covering the national and local races on Tuesday in a state that has become one of the key battlegrounds between President Barack Obama and former Massachusetts Gov. Mitt Romney. Under [continue reading…]