For William Conaway, Jr. (above, in blue), keeping the residents of Philadelphia Protestant Home involved in their town – and the town involved with the residents – is vital.

Philadelphia Protestant Home (PPh) is a senior living center located in Lawncrest. Conaway’s official title is director of community relations. However, five minutes of walking through the halls of the center with him illustrates what he really is – “a patient advocate,” as resident/employee Dot Gallagher puts it.

“[The other residents] know that I work here,” said Gallagher, who lives at PPh and holds a job in the on-site doctor’s office. “So when they need something, or want to know if something can be done, they’ll find me and say, ‘Can you go talk to Bill?’” 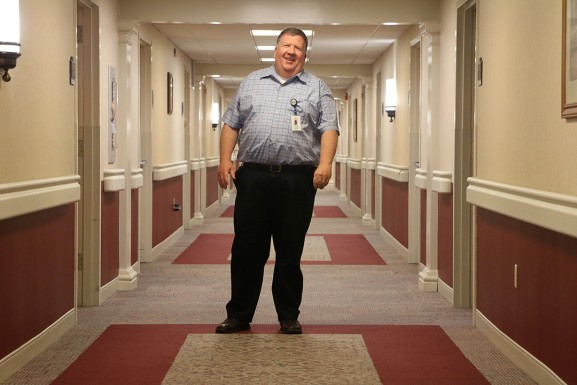 Conaway himself often stressed the importance of making requests happen for residents as long as they were feasible. While touring the center, he pointed out stained-glass windows in the on-site chapel, which were donated by a nearby church when they purchased new ones. The windows had been hung against a wall in the chapel.

“One of the residents said to me, ‘You know, if we put lights behind those, they’d look much better than just hanging against a wall,’” said Conaway. “And he was right, so I talked to some people and we made it happen.”

At that, he flipped a switch, causing the stained glass to light up as though it were an actual window.

“It’s little things like that that you can’t ignore, if they ask you,” said Conaway. “If we can make it happen, we will.”

Conaway has an extensive history with PPh, where he has worked for the last 34 years. Both residents and staff were always eager to explain that he started at the center as a paperboy, and has worked for them in some capacity ever since.

“He’s a walking history book,” said Clare Condon, business office manager at PPh. “His longevity is what makes him an asset. He knows everybody here.”

Taking a walk around the premises with Conaway proved that Condon’s opinion is true. The number of people that he did not greet by name was far smaller than the number of people he did. From maintenance workers to food service employees to residents to senior staff, most everyone who passed him waved hello and stopped for a chat. 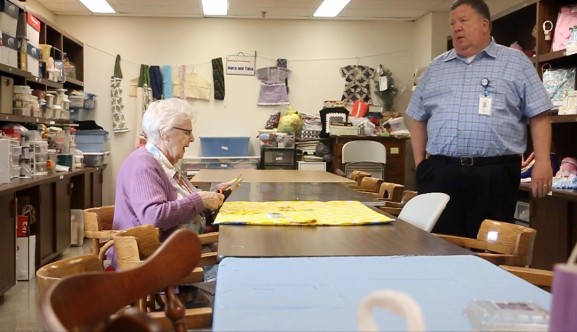 Conaway explained that he also strives to keep PPh residents involved in their community outside of the facility. PPh is a sponsor of the Lawncrest 4th of July Parade, which is celebrating its 100th anniversary this year. For many years, he said, residents of PPh have walked (or ridden) in the parade themselves.

Because their premises is so large, PPh also donates the use of its boardroom and social hall to outside community groups, such as boy scouts and some local church groups, often at no charge. The Lawncrest 4th of July Planning Committee is using the facility for its planning meeting on June 8. 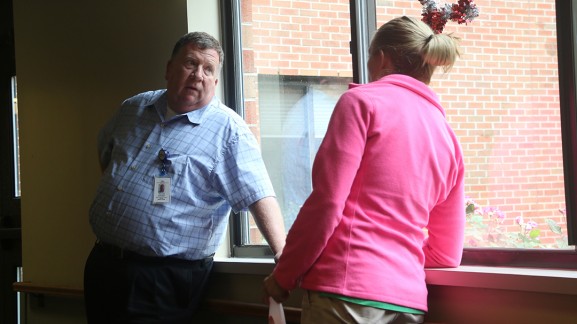 In addition, Conaway makes an effort to bring in politicians of all parties during election months, and invites the residents to hear them speak before they go out to vote.

Conaway spoke of PPh with a sense of pride, and happily told a story in which one such politician, upon taking a tour of the facility, remarked to a room before a speech, “Guys – there’s a swimming pool in here!”

Conaway also strives to keep his residents informed of current events by teaching what PPh calls Wisdom In Senior Education (WISE) classes. He said that he tries to use the classes to discuss what the residents are interested in outside of PPh, but also often brings ideas to the table himself.

The classes are popular with residents, and were also a topic of frequent discussion whenever employees or residents talked about Conaway. 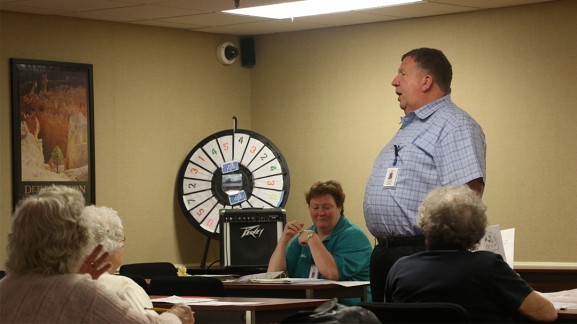 Conaway described the relationships that he has formed with the residents as his personal favorite part of working for PPh. He also cited his longevity with the center as a resource not just for him, but for everyone.

“Because I’ve been here so long,” said Conaway, “I know who can help residents out the best. It’s not always going to be Bill Conaway, but I can always make a phone call and get the right person.”

“It’s like when you’re in college,” said Conaway of the involvement he tries to encourage with people at PPh. “You can go to college, or you can be involved in college. People who are involved are going to get a lot more out of it than people who aren’t.”

– Text, images and video by Alyssa Luchette and Casey Kallen.

For nearly 30 years, Mayfair residents have been urging the Philadelphia Police Department and the City of Philadelphia to split the 15th Police District. Largely owing to a collaboration between Donny Smith (above), president of [Read More]

https://vimeo.com/92800313] As the Klein Jewish Community Center works to feed needy and hungry seniors, it has bolstered its efforts to become more self-sufficient. Efforts by people like Hunger Relief Volunteer Coordinator John Eskate, who has overseen gardening and [Read More]