She is a founding Cultural Agent and “Rhapsodist of Wherewithal” with the U.S. Department of Arts and Culture. She published her first poetry book “Monk Eats An Afro” last year and recently received the 2015 Pew Center for Arts & Heritage Fellowship.

How has living in Philadelphia influenced your work?

It’s interesting because I was born in Germantown but I didn’t grow up here. I grew up in Montgomery County, in the suburbs of Philadelphia. Totally different environment but Philadelphia was always kind of like the mythic city for me. I always knew I would eventually come back and it was just kind of fortuitous that I came back to Germantown.

There’s so much history here, personal history that I wasn’t necessarily a part of. I don’t remember it as a kid, or being born here but the phantom history that lives here, alongside the personal history that I’m creating, is something that really influences a lot of the work I do. I’ve lived here for about 15 years, in the same house on the same block and it’s given me a sense of place that I didn’t have growing up in the suburbs. 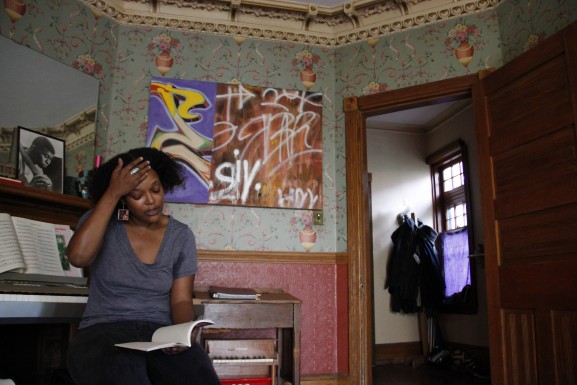 How does your love for poetry inspire your instruction at the Germantown Poetry Studio?

Poetry has always been a healing tool. I grew up in a house that was embroiled in some domestic violence and addiction and poetry was my outlet, so I knew what kind of space it was able to create. And I also knew what kind of dreams it could make for me.

So, as much as I can see that and connect with that in other people, regardless of age, I want to support it and guide it and create a space for it. Knowing that not everybody is going to want to be a professional poet, but the tools of poetry, expression, giving form to your emotions and your ideas, all of the little minute things about the craft that I learned as an undergraduate and graduate student can be boiled down to some way of connecting with people, some kind of human relationship. 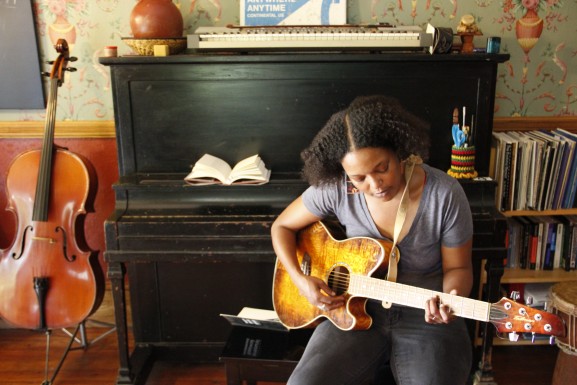 What would you say has been the most rewarding aspect of sharing what you love?

Definitely helping young people. I taught English for a decade at Germantown Friends School and so, while I was there I used my expertise as a poet to connect with students who really loved poetry and wanted to learn more about the form and the art of writing and performing it.

I also got to connect with a lot of students who totally did not want to go to English class and who dreaded the idea of having to write a poem. To see them 10, now 15 years later, it has just been really powerful. And to see that some of them are writing or are creative, that’s all I was really excited about or was trying to inspire in my students.

How has your work culminated into this first book you released, “Monk Eats an Afro”?

It’s a lot about family. It kind of came together when my son was born and just the experience of giving birth and becoming a mother and reflecting on the mothers that I’ve had in my life – my own mother, my great-grandmother, my aunts, a lot of whom passed, passed on during the time that I was finishing this book.

It kind of came together about the genealogical journey of being a daughter to a mother, against this backdrop of jazz and blues and hip-hop music, which is pretty much all I’m listening to and is the kind of stew that I came and grew out of. 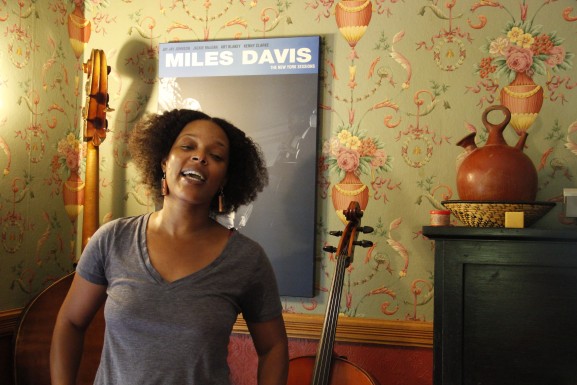 What’s the best advice you could give to young, aspiring poets, who are inspired by the work that you do?

There’s so much advice I’d love to give, which is why I like to teach.

The first one would be, find out if this is what you really want to do and, if it is what you want to do, don’t give up on it. There are lots of ways to be an artist but don’t necessarily limit yourself to one. It just means you have a lot more kids to feed, so you’re going to have to do some double time. I think a lot of people get stuck in the way that education systems are created, even colleges are created and jobs, where you have to choose that one thing you’re good at. You usually have to chop off a couple of arms to choose that one thing, and I would say find a way to have all of those artistic cells inside of you and let them live.

Sitting in the community room in St. Francis of Assisi Church, located at 4821 Greene St., were nearly 50 people from Germantown. The individuals differed widely in age, but remained seemingly equal in the amount [continue reading…]