On any given day, students at the Philadelphia Center for Arts and Technology may film and edit short documentaries, design the interior of a home online or, as Keisha Whatley’s 12-year-old son did recently, learn how to assemble a submarine as a part of April’s Greater Philadelphia SeaPerch Challenge.

“He loves science and technology, so he’s been able to get his hands dirty a little bit and he’s enjoyed that,” said Whatley, an art teacher at PCAT with two children in its after-school activities. The Full STEAM Ahead program her son is enrolled in, which stands for science, technology, engineering, arts and math, is one of several initiatives PCAT runs at various times for students in kindergarten through 12th grade.

The West Oak Lane-based organization was founded in 2009 with assistance from the Lenfest Foundation, Ogontz Avenue Revitalization Corp. and Foundations Inc., among others. Since then, almost 1,000 students have enrolled in its programs. Each week, Director Kristyn Stewart estimated, 500 kids attend classes at eight sites, including PCAT, throughout Northwest Philadelphia.

This past school year, PCAT introduced Full STEAM Ahead for middle schoolers, as well as DesigningU, a program for 9th and 10th-graders that teaches various types of design and engineering. Within the coming weeks, the organization is implementing a new initiative called REAL STEM, or Relevant Education and Learning STEM.

“Half of my job is coming up with acronyms,” joked Stewart, who has been PCAT’s director for two years. 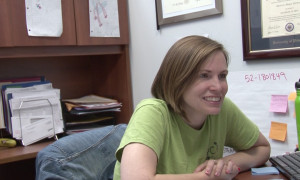 The six-week camp will focus on career exploration, with weekly themes during which 25 middle school students investigate careers relevant to that topic. Kids will also take field trips to nearby colleges and job sites.

Studying potential careers may motivate students to prepare for higher education; as of 2010, 34 percent of city residents are enrolled in college.

One school, ACT Academy Cyber Charter, has been headquartered at PCAT for almost three years.

“Many of our students attend the programs here and a lot of the kids who come here in the afternoon see our school and get interested, so we help each other out,” said Randol Thomas, the school’s recruitment and retention coordinator.

Immersing students in science and technology at a young age, Stewart said, can be beneficial later.

“As schools increasingly emphasize literacy and math in terms of state test scores, we’re really losing the sciences and then when kids go to high school, they can’t read scientific texts,” she said. “That’s scary because most of our jobs are in the STEM field and we’re not preparing students to fill those.”

According to a report by the National Governors’ Association, the number of STEM related jobs are expected to rise 17 percent by 2018. In Philadelphia, the fastest-growing occupations between February 2005 and this year have been professional and business services, followed by leisure/hospitality and education and health services.

Stewart recently compiled evaluations from PCAT’s students, in which less than half said their schools offered technology courses.

“Having these programs gives them access to things that kids in our demographic don’t normally have access to,” Whatley said of her children.

Most of the students who utilize PCAT’s programs live in and around Northwest Philly.

“We’re in a community that’s pretty spread out, so we don’t have the Broad Street Line right outside and we’re not in Center City, so the people here are pretty tight-knit,” Stewart said.

The closeness of the neighborhood is how Stewart said most adults hear about PCAT’s seasonal computer-literacy courses, where a majority of enrollees are elderly residents who want to keep in touch with faraway family members or friends. Classes include intros on how to use Microsoft Word, online banking and iPads, along with communications courses involving Facebook, Skype, email and Google Hangouts.

“Many seniors don’t trust technology yet, so teaching them how to use it, as well as the pitfalls, scams and what’s normal and what’s not has been helpful for them,” Stewart said.

“Social media isn’t going anywhere and parents restricting it isn’t necessarily helping kids learn how to use it better, so we’re trying to work with parents so they can understand what to look out for and make a more positive presence in families’ lives,” Stewart said.

Teachers at PCAT hope to expose more students to technology as the high schoolers who gained technical skills in DesigningU last year move on to more advanced material in the fall. During summer camp, kids will learn game design and digital animation. By the time they’re seniors, Stewart said they aim to have each student Cisco-certified.

“Embedding technology in the learning process helps kids think about things differently and helps their work flow to be a lot more standardized, whereas before it’s been a struggle to break down tasks and get things done,” Stewart said.

– Text, video and images by Cheyenne Shaffer and Beth Boyle.

West Oak Lane is a vibrant residential neighborhood in Upper Northern Philadelphia that is home to one of the United States’ 135 national cemeteries. On the corner of Haines Street and Limekiln Pike lies the [continue reading…]