Mike Scotese, president of the Mayfair Business Association, owner of the Grey Lodge Pub and co-owner of Hop Angel Brauhaus, was born and raised in Northeast Philadelphia.

Known as “Scoats” to many of his peers, he has lived in Holme Circle, Frankford and Tacony. Scoats said the future of the Northeast neighborhood Mayfair is unpredictable because of the unexpected changes in other neighborhoods in the area. The Northeast native values being involved with Mayfair for many reasons and hopes Mayfair will evolve into a neighborhood like Fishtown.

How did you get involved with the Mayfair Business Association?

When the Mayfair Business Association restarted at Robbins Avenue and extended down to Harbison Avenue, I saw the value of being involved in the neighborhood. So when it was time to elect new officers nobody wanted the job as president. We were in meetings all day until the final person said, “Yes.” And just like that I got the job. 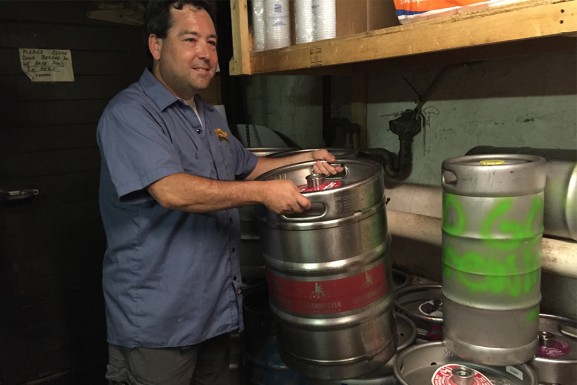 What are some of your daily duties as the president of the Mayfair Business Association and owner of the Grey Lodge Pub?

Every day varies. Sometimes I work from home and I work on the email newsletter for both the Grey Lodge and the Fox Chase German restaurant Hop Angel Brauhaus for September. I plan and promote events and order beer for both restaurants. I make sure to pick interesting local Philadelphia brewed beers to keep the lineup fresh. I create the flyers you see in the pub and write down all the specials on the board. 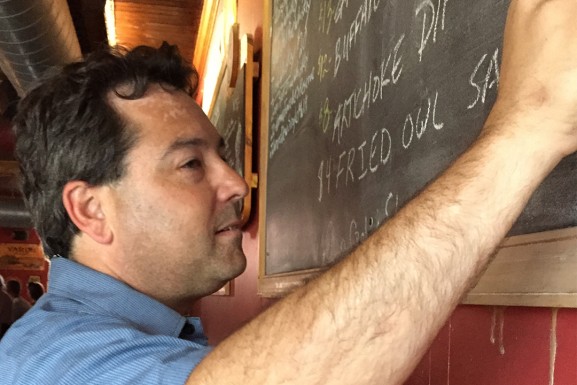 When I attended LaSalle University in Olney for undergrad, I worked at restaurants and bars. When I graduated, I got the typical nine-to-five office job. I quickly realized that it wasn’t a good long-term place for me to be. So, I reconsidered what I wanted to do and selling beer seemed like a great idea. In 1996, I invested in the Grey Lodge Pub and it became Philly’s first bar to sell craft beer. 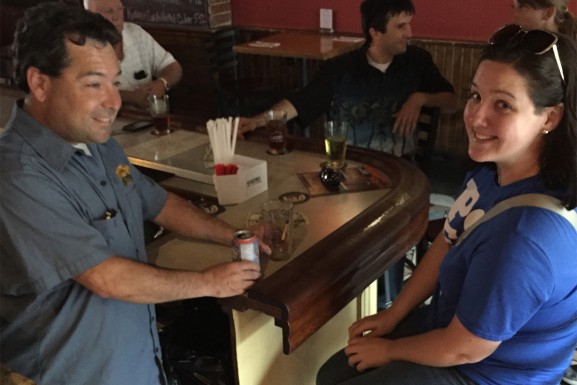 How would you improve Mayfair?

I think adding more trendy bars would attract more people to this neighborhood. Letting people know we exist would also be an improvement to the neighborhood. When people think of Philadelphia, they think of the Center City area and not the Northeast.

The Grey Lodge Pub is similar to the bars in the trendy neighborhoods like in South Philly. Twenty years ago, South Philly and Fishtown were not seen as they were today. Young people didn’t hang out in those places. Today, they’re the places to go and to meet up with friends for local brews. I want Mayfair to become like those neighborhoods.

Where do you see Mayfair five to ten years from now?

In the last five years, the neighborhood hasn’t changed, so I don’t know what to expect. I would like to see more trees along [Frankford] avenue. Trees would add a more comfortable and welcoming atmosphere. I would also like to see it evolve into a neighborhood like Fishtown where young people come here to spend time with friends and try local beers. Not many people know about Mayfair. People don’t really explore out to the Northeast.

This neighborhood is filled with row houses. It seems like these types of houses are becoming popular in Center City. I would like to see these houses become more modernized and see them cleaner.

I want it to be more diverse. A lot of immigrants are starting to move here and I want the second generation immigrants to be more involved in the neighborhood.

“Individuals make neighborhoods.” These were the words spoken by Joe DeFelice, chairman of the Mayfair Community Development Corp., at Thursday’s meeting between community leaders and members of various Philadelphia news outlets. The meeting, which took [Read More]

Fishtown: The Rocket Cat Cafe and its Crazy Name

The Rocket Cat Cafe has been serving locals for eight years in Fishtown. The restaurant located on Frankford Avenue caters to all including vegetarians and vegans. The cafe does have an interesting name. Owner Karen [Read More]

Saturday was a beautiful day for a lemonade stand. Sandra Stewart thanked everyone who came out to her daughter Corin’s Alex’s Lemonade Stand outside of Marinucci’s Deli on the corner of St. Vincent street and [Read More]