The Community College of Philadelphia campus on Spring Garden Street was put on lockdown Tuesday morning after reports of a gunman on the loose.

Philadelphia Police officers, along with agents from the Bureau of Alcohol, Tobacco and Firearms, responded to a student’s report of a man who had threatened him with a gun on campus. Three blocks of Spring Garden Street, from 17th to 20th Street, were blocked off. Police put up yellow tape and cordoned off the area from traffic both vehicular and pedestrian. 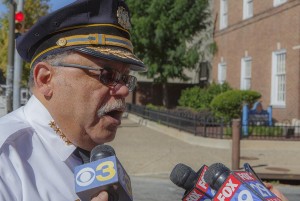 According to Philadelphia Police Commissioner Charles Ramsey, a person approached a student regarding about an ongoing argument. The person brandished a gun and the other individual threatened to call security. After the threat of the call to security, the gunman reportedly ran off and entered The Winnet Building.

“This does not look like the act of an individual that is random in nature,” Ramsey said. “They had a confrontation with one another and that is when the gun was seen.”

The suspect, a minor, was taken into custody after he was found on the campus. He was unarmed but police believe he may have tossed the gun in question. Law enforcement officials searched for the weapon throughout the day. 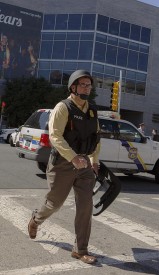 Tensions were already high, just days after a shooting at Umpqua Community College in Roseburg, Oregon left nine people dead and numerous others injured. Also, a threatening online post that referenced Philadelphia universities was discovered over the weekend and area college communities were warned to be vigilant.

This is the second time in recent history that Community College of Philadelphia has been placed on lockdown. In May of 2014, another lockdown occurred after of a student brandished a firearm in a classroom.

Yesterday’s lockdown has since been lifted. Classes at Philadelphia Community College were cancelled for the remainder of the day but they resumed as normal today.

– Text and images by Chip Frenette.