Casey Pearson grew up in Philadelphia taking art classes three hours a day at Girard College. Fresh out of high school, Pearson went to put his skills to work air brushing, and from there became a tattoo artist at Brewerytown’s Big City Tattoo, where he’s been for the past 14 years. 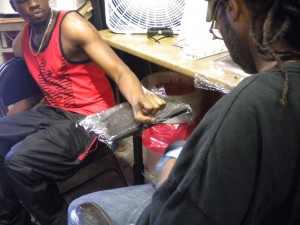 “I wouldn’t say it was a dream to be a tattoo artist, more so just a way to support myself doing art,” said Pearson.

Getting right into an artistic craft made more sense than being in debt for art school when he wasn’t guaranteed a job.

Pearson described his passion for art by mentioning that, as a kid, there’s certain things you want to do to prove your parents wrong. Parents will ask, “Why do you want to do that?” and he said this is what pushed him towards the path of making a living based off of an art form.

At home, Pearson has a wife and daughter whom he uses as his inspiration for being a better artist. Tattooing has some common misconceptions, he said.

“People think that everybody has extra money all the time,” Pearson said. “We have families like everyone else and it can come quick and leave quick.” 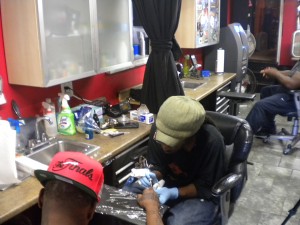 Price is often what allows house tattoo artist to thrive. But business at the shop isn’t what it used to be, according to Pearson and co-worker Todd McLean.

Blood borne diseases such as hepatitis and MRSA, along with extreme cases of skin infection, are possibilities when getting a tattoo outside of a parlor that’s up to code. Sharing the pen of an ink gun at a tattoo party could be a serious gamble.

“People aren’t mindful of what they’re doing and cross-contaminating” when they go to get tattoos outside of a tattoo parlor, noted Pearson.

With the decline in business, the use of social media has become a big part of a tattoo artists’ advertising.

“I think you have to use social media to broaden your area,” Pearson said.  “Put out as much good work as you can, because word of mouth is your best advertisement.” 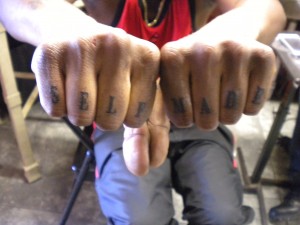 “I heard about them through some people, and they already had a good reputation,” said Jamar Sutton, who has over 20 tattoos and had two pieces done by Pearson on one recent day: A piece on his knuckles that read “Self Made” and a dollar sign on his forearm.

“Everything I get has a meaning,” said Sutton. “Every tattoo you get, just make sure there’s meaning behind it, because this is something you have to live with for the rest of your life.”

Working around other skilled tattoo artists can help make a difference in someone’s work. Some artists can hit a wall and need to draw inspiration from others.

Pearson mentioned that he liked to look at other artists’ work and break it down to see how it was done.

Down the street from Big City Tattoo is The Electric Temple near 29th Street and Girard Avenue, which has only been open for the past five months. Artists Keith Suspic and Bryan Holland are well aware of the hurdles of being the new kid on the block and of being a tattoo artist in Philadelphia in general.

“Any new shop takes a little while to build clientele, it takes a little for a new shop to grab a hold of a neighborhood,” said Holland. “Got to be real serious to get into the industry. It takes years and years of not making money and struggling.” 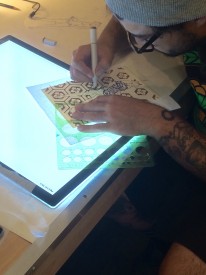 Both Holland and Suspic explain that the tattoo artist scene is competitive.

“It’s very hard to get clientele if you’re not good,” said Holland, who enjoys Brewerytown despite the competition. “The area has been very good compared to any other neighborhood I’ve been in.”

The craft of tattooing is more than just owning the equipment. Artists at both Big City Tattoo and Electric Temple apprenticed under older tattoo artists to learn how to properly sanitize their work area, how deep to go with the ink gun and, in the end, how to be a tattoo artist.

The craft of a tattoo artist extends beyond just putting ink to skin.

“When you learn about other aspects, drawing and painting, if you don’t have those techniques down then your tattooing won’t look that great,” Pearson said. “Know your craft, know it before you start putting out work.”

– Text, images and video by Jonathan Bodack and Donte Kirby

Anne Palmer, a professional speaker and author, shared her near-death experience with a group of intent listeners inside Mt. Airy bar Goat Hollow. “It was 105 degrees for three weeks,” Palmer emphasized. “Not outside. 105 degrees […]

One of artist Charlyn Griffith’s biggest accomplishments was being nicknamed “Ms. Strawberry Face.” “I think that at the point where a young person feels like you belong to them, you’ve succeeded in making a connection,” […]