In celebration of Pope Francis’ arrival in Philadelphia for the World Meeting of Families, approximately 3,000 Vietnamese Roman Catholics gathered at Cardinal Dougherty High School to celebrate.

“That’s not a church,” objected one child as his mother led him through the flag-festooned gates.

The scene at the school doors defied his observation.

Dozens of priests mingled with laypeople. Knights of Columbus in white-plumed hats and dark suits with red-trimmed capes disrupted a sight replete with formal wear and clerical collars. Ceremonial swords swung from their hips. A few feet away, people posed for pictures with a cardboard cutout of Pope Francis. 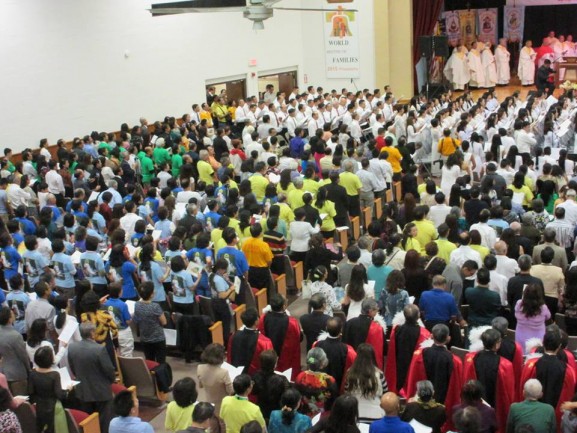 Organized by St. Helena Church in Olney, Cardinal Dougherty became the locus for Vietnamese Catholics to gather in celebration of their faith and culture. Many had traveled all the way from Vietnam to take part in a special Saturday Mass coinciding with the papal visit to Philadelphia.

The church, noted for its diverse congregation and particularly for the number of Vietnamese Catholics in its parish, rented space from the school in order to house the influx of worshippers.

Church staff estimate that St. Helena clergy minister to 1,300 families, more than 200 of which are Vietnamese. The importance of bringing families together in a place they could simultaneously celebrate their faith and their heritage ranked among foremost considerations.

“We’ve been working over a year for this event and now it’s here,” said Monsignor Joseph Trinh, pastor at St. Helena Church. “We’ve put in a lot of effort and time and energy, but the good thing to come out of this is that we’re really willing to come together to work on a common good.”

Trinh estimated a turnout of 3,000 Vietnamese laypeople, 200 priests, 8 bishops and a cardinal. The faithful filled Cardinal Dougherty’s 3,000-seat auditorium to capacity. Flanking either side of the packed hall stood two gymnasiums to receive surplus attendees. Projectors broadcasted the ceremony taking place in the auditorium. 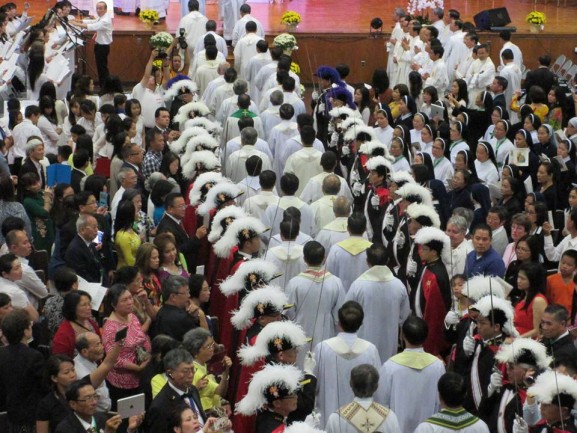 St. Helena Church staff also prepared 3,000 hoagies and bottles of water for lunch after the service.

The homily delivered by the bishop centered on the transcendence of love.

Thang Do, a Vietnamese Catholic who traveled from San Diego to volunteer at the event, found profundity in the fusion of cultural and religious celebration. 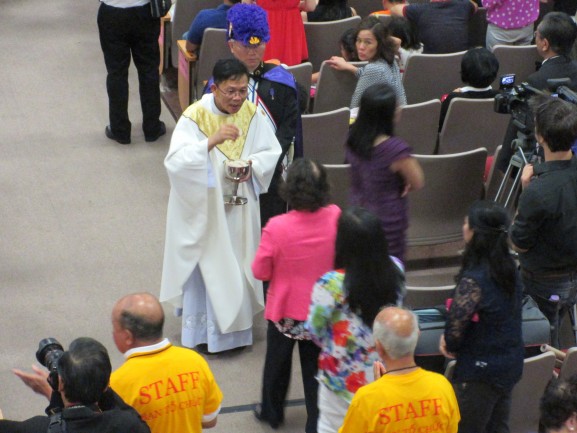 “I felt a unified connection with the rest of our brother and sister Catholics and anybody who is here for this Meeting of Family event,” Do said. “I also feel connected with my culture in terms of being proud as Vietnamese, because we celebrate Mass in our own language.”

Trinh noted that Vietnamese was selected as one of the five official languages in which one could hear Pope Francis’ address.

The selection speaks to the growing number of Vietnamese Catholics. According to a 2012 survey of Asian-American religious affiliation by the Pew Research Center, 30 percent of Vietnamese Americans are Catholic.

Of the sum of the attendees at the World Meeting of Families, Trinh estimates that 10 percent are Vietnamese.

And many have crossed oceans to make it to Philadelphia.

After lunch was eaten and goodwill exchanged, the worshippers sang songs, some wearing traditional Vietnamese dress. 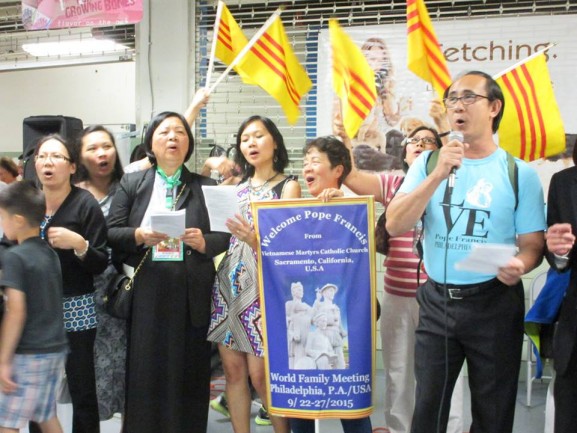 Leaving the Saturday Mass-turned-festival, Tuyen Nguyen of Cherry Hill, N.J., waved a Vietnamese flag overhead. As the wind whipped it taut, the words “We are Vietnamese” could be seen written in red marker.

Nguyen said that she’s escorting Catholics who traveled from Vietnam to attend the congress, adding that she’s hosting a family of 10 in her home. She carried the flag in order to help guide her group.

Together with her sister and neighbors – friends within the St. Helena parish – they’re accommodating 34 Vietnamese Catholics who have journeyed from Vietnam to Philadelphia to visit the World Meeting of Families and to see the pope.

“The Pope is a blessing for us because we always wish to visit everybody in a Catholic faith,” Trinh said. “Everybody wants to see the Pope. And so he’s come to town and we are here. We have the unique opportunity to celebrate and then to welcome the people to come to Philadelphia because we were welcomed when we first arrived here. We found the city [full of] brotherly love and it really welcomed people, and so it’s our turn to show the people who come to town that they’re welcome, too.”

– Text and images by Jake Pilkington and Rovell Vialva

Max Ochester, owner of Brewerytown Beats at 27th Street and Girard Avenue, moved to Brewerytown in 2010, a few years before it became the “up-and-coming” neighborhood that it is now. In late 2014, Ochester’s developer friends [continue reading…]