Mention football and South Philadelphia in the same sentence and most people will instinctively think of the Eagles. However, across the street from Lincoln Financial Field, at FDR Park, another kind of football is making a difference.

The Greater Philadelphia Flag Football League provides not only a competitive athletic experience but a social atmosphere that tries to accommodate everyone.

“Our goal is to provide a safe and fun environment for all players male or female,” said Gary Isaacs, the commissioner of the league.

The GPFFL focuses on creating a fun and comfortable setting for the Lesbian, Gay, Bisexual, Transgender and Queer community. 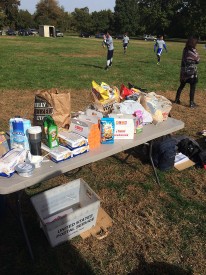 The league has grown in popularity because of the popular idea of playing a sport where everybody sees you for who you are, not who you are not.

“It’s great because everyone is just out here to have fun and no one worries about your sexual orientation,” said Dawn Yergey, a player on the black team.

While the social aspect is a priority, there is no shortage in competition. Games are held on Saturday mornings, from 9-1. With eight teams that consist of 11 players each, the park is packed.

“It’s really a fun environment if you can wake up early on a Saturday,” Yergey joked.

As you walk up to the games, it is easy to notice the scenery that signals football. Fall foliage surrounds the fields, while friends and family come out to watch the game, with food served along the side.

“Holding tailgates after games is just another great way that we bond,” Isaacs said.

During the games, it is evident that the players are not just here to have a good time. They are here to win.

With 2 fields 80 yards in length, referees in uniforms and a chain gang to mark first downs, there is virtually no difference from watching any other football game. Even some trash talking can be heard.

“Everyone here is very competitive and athletic, and we even get together to call plays, so it’s definitely taken seriously,” Yergey added. 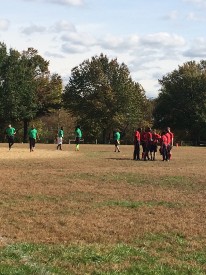 Once the games end for the day, the fun is not over. Many members become great friends. The GPFFL holds several social events to get their members to be more comfortable with each other.

These parties allow members to get to know each other and find out what they have in common.

“I have made many friends from these events and love hanging out with the girls on the other teams,” Yergey said.

Not only do players become friends with other players in the league, they also have the chance to meet players from across the country. Last October, Philadelphia hosted the Gay Bowl, a championship tournament of the National Gay Flag Football League and one that is open to any team.

One of the toughest parts of running the league and an event like the Gay Bowl is finding a place to play.

“To me, at some points in time, Philadelphia is the city of no,” said Jeff Sotland, president of Out Philly Athletic League, an organization created to be an umbrella for all LGBT sports leagues in Philadelphia.

“We have to fight with the city to help these sports get and keep their fields,” Sotland added. “Sometimes they are being taken away from them.”

The GPFFL has been one of the biggest benefactors from the creation of OPAL. Originally, the league was smaller and had trouble advocating for the necessities that would help the league grow (the only LGBTQ sport that was big enough to advocate was softball).

However, under OPAL the GPFFL league has expanded to more than 100 players.

“Many of these guys here play softball, too,” Sotland said. “They really love it because in the spring they can play football on Saturdays and softball on Sundays.”

Mixing of sports and cross promotion benefits the GPFFL and other LGBT sports leagues.

“When you get a lot of people coming over from different sports, they’ll talk with each other and get others interested in different sports,” Sotland noted. “It really helps to grow the leagues.”

While the GPFFL has made large-scale strides, its core message remains the same.

“We want all our members to have a positive experience,” Isaacs reinforced. “This is our seventh year and we keep growing so I believe it’s working.”

Turns out, there is some good football being played in South Philadelphia.

Eugene Desyatnik is the president of the Bella Vista Neighbors Association. Desyatnik, a naturalized citizen hailing from the former Soviet Union, has lived in Center City for more than 12 years, recently moving to Bella [continue reading…]

Story by Kent Kuo Philadelphia officials have unveiled new designs for many of the facilities in FDR Park, as part of the next phase in implementing the FDR Park Master Plan, first introduced to the [continue reading…]