On a cool Monday night in October, more than 20 young adults bundled up to play softball at Mill Creek Playground in West Philadelphia. But these were no ordinary players.

There were men and women hustling around the bases and around the field. That’s because the Philadelphia Adult League Softball (PALS), located at 48th and Brown streets in Mill Creek, has offered a competitive coed league since its inception in 2012. PALS has played spring and fall softball, on Monday and Tuesday nights, from 6-10 PM, since it began. 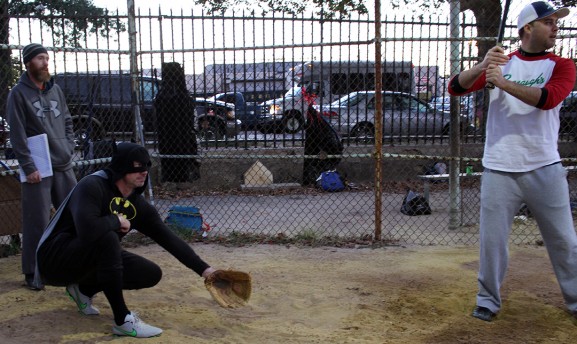 S co-founder, Steve O’Connor, (above, at left) played for various softball organizations for many years but he had been dissatisfied with the lack of women on his teams.

“We wanted to do a competitive, social, and charitable aspect,” O’Connor said. “So when we first started playing here, we decided to put at least 10 percent of our team fees toward charitable donations. And we played coed, so we wanted to make a league that was fun to play in but also a little bit competitive. In Philadelphia, there are really good men’s leagues. There are really good women’s leagues. But there’s not a lot of mixture.”

O’Connor began a partnership with Mill Creek Recreation Center, which houses PALS games, in May 2012. Mill Creek has agreed to house PALS games in exchange for PALS help in its playground events. Additionally, O’Connor has paid Mill Creek every 10 weeks for a permit for the field.

Kelly, whose undergraduate and graduate studies focused on American Studies and international peace and conflict resolution, has been involved with nonprofits since she received her bachelors from Drew University in 2003. She contextualized PALS coed situation in an interesting manner.

“I generally found everyone to be very supportive,” O’Connor said. “I mean, it varies a lot, and I think just outside of here, I’ve been fortunate enough to play on some really good teams. So I see what it’s like to be on a team that supports its women players.” 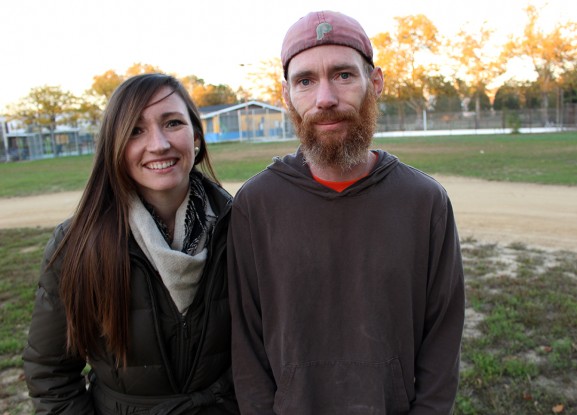 The O’Connors (above) have continuously worked to blend great players with players who simply like having a great time. Having to navigate the ever-present gender dynamics has been giving Steve the most difficulty.

“I think the biggest thing that Kelly and I do is we check in with the women players,” O’Connor said. “That’s the best source to figure out what’s working, what’s not working, what needs to change, what doesn’t need to change. From a male’s perspective, I talk to other men about some of the gender dynamics.

“For me, I had to learn how to deal with people who played as hard as me, and know that I have to just do things a little bit differently than maybe I normally would have. You never really see them [women] playing shortstop. The managers do a great job assisting men into coed softball, because some of them previously had negative viewpoints on women.”

Steve’s moral dilemma has been helped in a unique way. Kelly started playing softball at the age of 30. But even after initially struggling mightily, Kelly stuck with the sport because her teammates encouraged her, and she has since been glad she didn’t stop.

“Our goal is to recruit and encourage as many highly competitive players to come and play as possible,” O’Connor said. “But it’s also creating an environment where, if you are a newer player, you feel comfortable playing.”

And while the O’Connors have appreciated participants enjoying themselves, the duo has prided themselves, since 2012, on being competitive. Because of the organization’s youth, PALS has been selective of its potential suitors. Steve has chosen teams, which he and Kelly have approved of, before the couple has allowed those teams into their league. 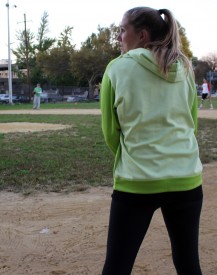 Caroline Tucker (pictured right) played softball at Amherst College. She searched for a league that had a competitive and social component to it. That’s when she found PALS.

“I grew up playing softball,” Tucker said. “I guess I played after college. Then I moved to Philadelphia and I really didn’t know anybody. So, it was really a way for me to meet people in the city. And it was a skill that I had that I could use to get to know other people.”

On the competitive side of things, Steve has been proud of PALS’ consistency and viability in the amateur sports world. Since 2012, O’Connor hasn’t lost any of the 18 teams he has allowed into his league. The co-founder credited that fact to his choosing mostly teams with numerous amateur league championship titles.

But competition has not existed without its issues. O’Connor has implemented a 6:4 men:women ratio for PALS. The rule has entailed, out of the 10 minimum fielders, four have to be women.

O’Connor said he wanted to eventually get to a five-to-five: women:men ratio but added that too many people haven’t been consistent enough in playing a full 12-game season, so he has continuously struggled to remedy the gender situation. While in the process of doing so, he has implemented a rule that has prohibited players from missing more than three games. If they do, they’re ineligible to play in the playoffs.

The bat and walk rule are the two major rules designed to level the playing field for women. For the bat rule, if a guy bats before a woman, and the guy walked, the woman would have the option to voluntarily walk, as long as the bases weren’t loaded when the guy had walked. Men have had to use wooden bats, without exception, while women have used single-wall ASA-approved aluminum bats.

While O’Connor said he could see how these rules could help and hurt women, he justified their existence.

“A lot of people think that it [the walk rule] is sexist toward women,” O’Connor said. “I understand that viewpoint. But I look at it from a different angle. It protects the male batter who’s up first more than it protects the woman who’s up after him.

“There’s a big push in the coed world that women cannot hit as well as men. From a walk perspective, we have the rule so that people like that don’t even have that thought.”

O’Connor has been pondering these and other thoughts recently. These won’t be the types of changes that could be made overnight. But as he kicked dirt on that chilly October night, it was apparent the thought had penetrated his conscience.

– Text, images and video by Sam Botwinick and Steve Godwin.

Julia Press Simmons, 34, has been writing since her father called her a “little liar” and gave her a pen and pad at the age of 11. He told her to start writing her lies [continue reading…]