It has been nearly three years since The Church of Jesus Christ of Latter-day Saints began constructing its Philadelphia temple (above). Standing tall on Vine Street, between 17th and 18th streets, there are only a few more additions needed before it is open to the public next summer.

However, the temple is only one of three projects that The Church of Jesus Christ of Latter-day Saints has been building in this area. They are also building a meetinghouse (chapel) and a residential tower.

The entire project stretches from 16th to 18th Street, on the north side of Vine Street. Much of the land was previously a parking lot. The Church’s temple and meetinghouse are set for completion in late summer to early fall of 2016.

The 33-story apartment building’s opening, however, is set for 2017. It will feature 13 townhouses and 233 one and two bedroom apartments, according to community relations director Jon Stephenson (below, left).

Jordan Peterson (below, right), The Church of Jesus Christ of Latter-day Saints’ Philadelphia stake’s president, estimates there are about 4,000 members of The Church in Philadelphia alone, and approximately 40,000 members in the entire region who will come to this temple. Being the between point for Washington D.C. and Manhattan temples, and the only temple in Pennsylvania, the Philadelphia temple is predicted to see a lot of action. 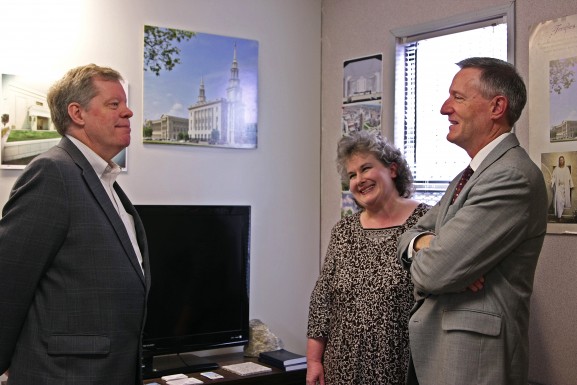 “It’ll be a tremendous blessing to have a temple right here for us, to be able to go there more frequently and have it closer,” said Peterson. “Temples are very special to us.”

Though there are nearly 30,000 Mormon meetinghouses worldwide, according to The Church’s statistics page. There are only about 150 temples in operation currently. Peterson elaborated that is because the meetinghouses are where Sunday worship takes place, and where members visit on a regular basis. Temples, according to Peterson, are the places where Mormons have their highest forms of worship.

The Church of Jesus Christ of Latter-day Saints eventually chose the location of Philadelphia because, as said by public affairs specialist Flora McConkie (above, middle), “I think it’s reflective of the church’s growth in our area.”

McConkie also mentioned that the decision to build was ultimately made by the senior leaders in Salt Lake City.

Though Logan Square may seem like a prime location for this project, it was not the first choice, according to McConkie. In 2008, when the project was announced, The Church has originally planned to build across from the School District of Philadelphia on Broad Street. Due to contamination issues, they had to reevaluate the location. 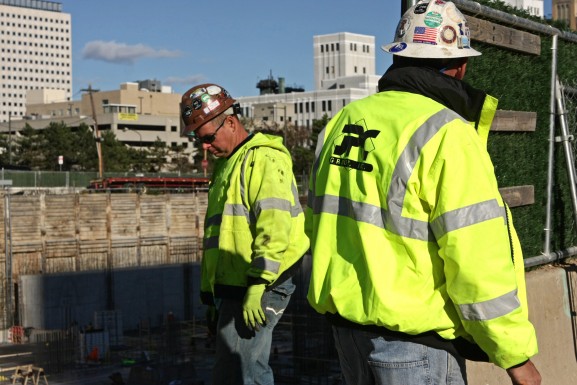 Project officials agree that other than this setback, the development has been relatively smooth since the process began at Logan Square in January 2013. Anxious to open the temple, the only challenge they can recall at this point is time.

Unsure if it will cause an increase in the number of members of The Church, Stephenson knows one thing this temple will do for sure – strengthen the Mormon community.

“People are more frequently able to come, and more conveniently able to come and worship and strengthen themselves spiritually,” explains Stephenson. “That’s what a visit to the temple does for us.”

“The residential tower will provide tax revenue to the city,” says Stephenson. “The temple will bring our members from throughout the greater Philadelphia area into the city to worship and participate in activities. We expect they will spend time in the neighborhood, visiting the museums and the other cultural institutions, restaurants and other sorts of things. We feel that there’s going to be economic benefit.”

The Church of Jesus Christ of Latter-day Saints received the funding for this project though, tithes and donations from our members that are freely offered, said McConkie.

“There will be no loan or mortgage,” she added. “It’s done through the offerings of members of the church, who consider it a house of the Lord and are grateful for a place nearby that can be the house of the Lord for their area.”

The overall cost of the project has not been revealed to the public.

When nonprofit Uhuru Furniture moved from Center City to Francisville, sales manager Ruby Gittelsohn remembers one community member’s surprise. “I remember one guy said, ‘I was watching while they were renovating this building, but I [continue reading…]

Kevin Moran is the executive director at the Fairmount Community Development Corporation, located on 2712 W. Girard Ave.. He is also a Fairmount resident. As executive director, he develops research and policy agendas. The organization’s goal, according [continue reading…]