Tom McAllister had never listened to a podcast before he began co-hosting his own.

The Barrelhouse literary magazine non-fiction editor was prompted by friend and Barrelhouse books editor Mike Ingram to start their own podcast, Book Fight!, a few years ago.

The pair have garnered a following of listeners with what they call a more conversational take on the traditional literary podcast.

“There were a lot of book podcasts that were fine,” Ingram said. “But they sounded more stuffy, more NPR-ish. They weren’t conversational. It dawned on me that there was this thing I wanted that didn’t exist so I had to create it. Then I explained to Tom what a podcast was and made him do it with me.”

“Mike said, ‘Let’s try to make one that’s more like what it’s like when we talk about books,’” McAllister said. “It’s a little looser, more digression, less like a second-rate graduate class.”

McAllister and Ingram met in grad school at the University of Iowa. After moving to Philadelphia and becoming adjunct English professors at Temple University, they decided that a podcast seemed like a natural way to involve other avid readers in their everyday discussions about books.

“I think if the podcast works, it’s probably because we know each other and are comfortable with each other,” Ingram said. “As opposed to just being two colleagues or two relative strangers.”

“Sometimes things get crazy with school and we get to a point where I’ve realized all of my conversations with Tom have been recorded because that’s the time that we hang out,” Ingram said. “We don’t get to meet at a bar and have beers.”

Aside from the podcast and their continued teaching at Temple, McAllister and Ingram spend a portion of their time reading the more than one thousand submissions that the Washington, D.C.-based Barrelhouse receives annually.

Founded in 2004 by a group of friends as a way for readers and writers to get their fill of off-brand and humorous indie-lit, Barrelhouse is a small group effort. In fact, McAllister and Ingram typically comprise one-third of the staff.

“There are only five to seven us, depending on what year it is and who has recently had a baby,” McAllister said.

Due to time constraints, the process is rigorous with Barrelhouse only accepting about two percent of work each submissions period.

But unlike some other literary magazines, hopeful writers will never pay a dime.

“Under no circumstances should a writer be paying just for the right to have their work read,” McAllister said.

Ingram doesn’t follow a specific rubric when it comes to submissions, but he can tell when he’s found something he likes.

“Every now and then you’ll find that essay or story or whatever that makes you say, ‘Oh my god, this is awesome,’” Ingram said. “But I know it’s good if I read it and immediately want to share it with the other editors and I get antsy because they aren’t reading it fast enough. I worry it’ll get snatched up by another publication.”

After submissions, the staff’s primary focus is on organizing two writing conferences held in October and April. Barrelhouse has published the work of more than 400 writers in its 11 years – something Ingram and McAllister say would not be possible without the strong literary community in Philly.

“Community is a big buzzword for a lot of people,” McAllister said. “My experience—and this is one of the rewarding things about it—is it’s developed this whole other community in my life of other editors and writers you’re generally happy for.”

McAllister, author of the 2010 memoir “Bury Me in My Jersey” with another novel scheduled for release in February 2017, is just one of the authors to read their work at The Spiral Bookcase, owned by Ann Tetreault.

Tetreault said hosting events like book readings and brunches is the best way to unite authors and build connections.

“It’s interesting to discover the authors in my own backyard,” Tetreault said. “People like Tom McAllister who grew up here. Opening a bookstore, authors do tend to find you.”

The store’s most recent event, organized in part by McAllister and Ingram, brought together three authors, James Tate Hill, Daniel Nester and Andrew Ervin, who read excerpts aloud from their newly published works.

McAllister said the latest reading, held on Dec. 4, was a way to not only connect authors and interested readers, but to help solidify this community feel. 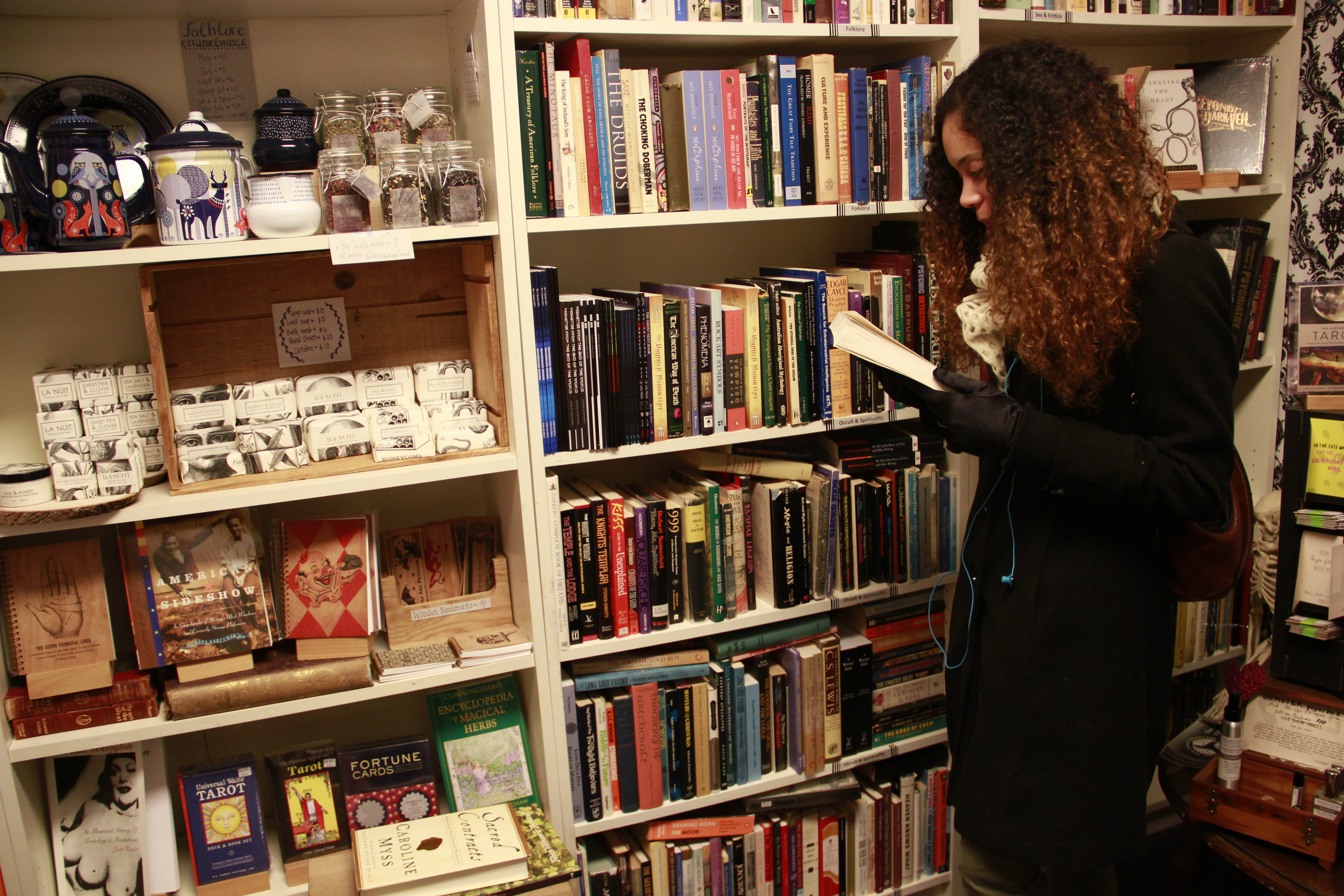 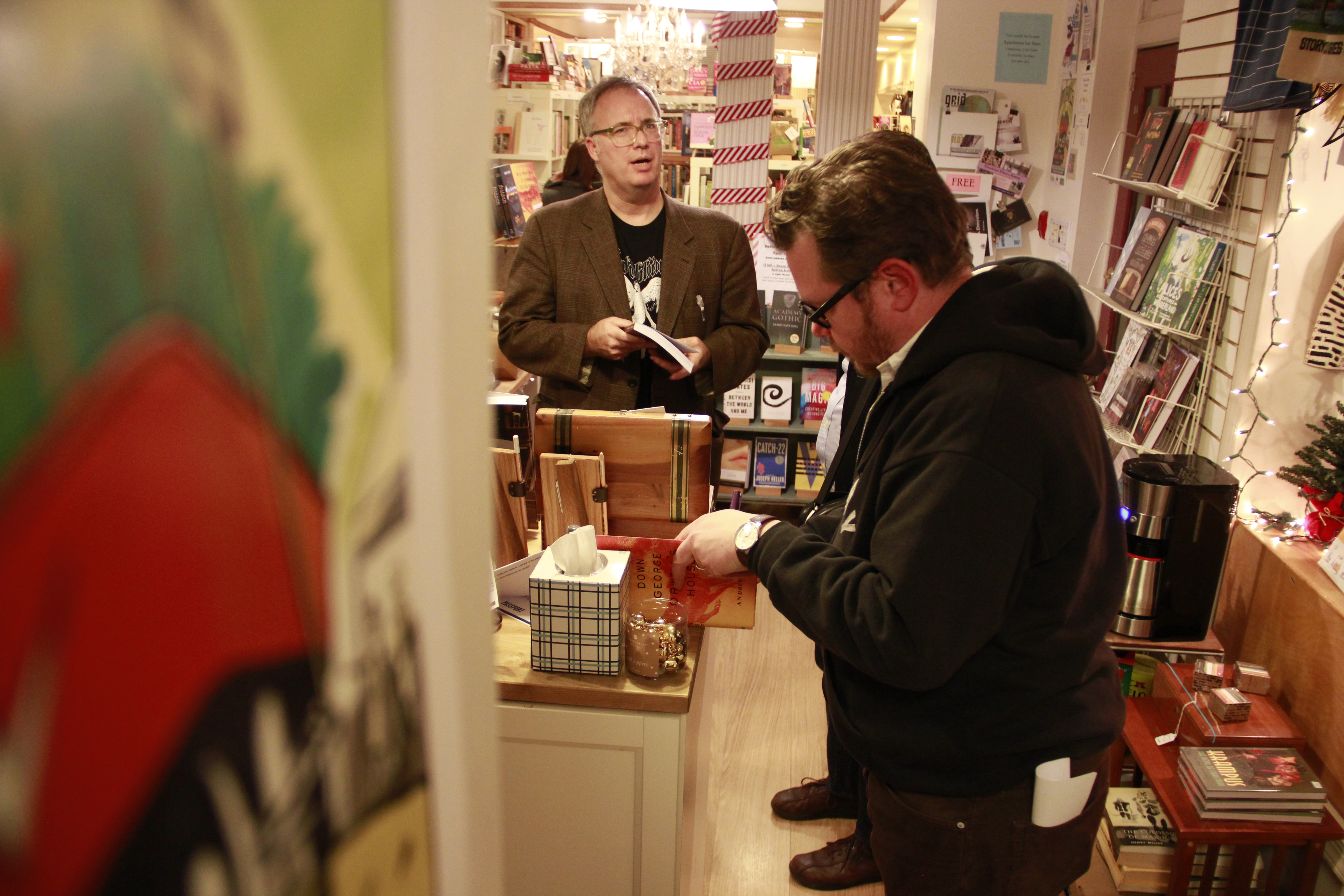 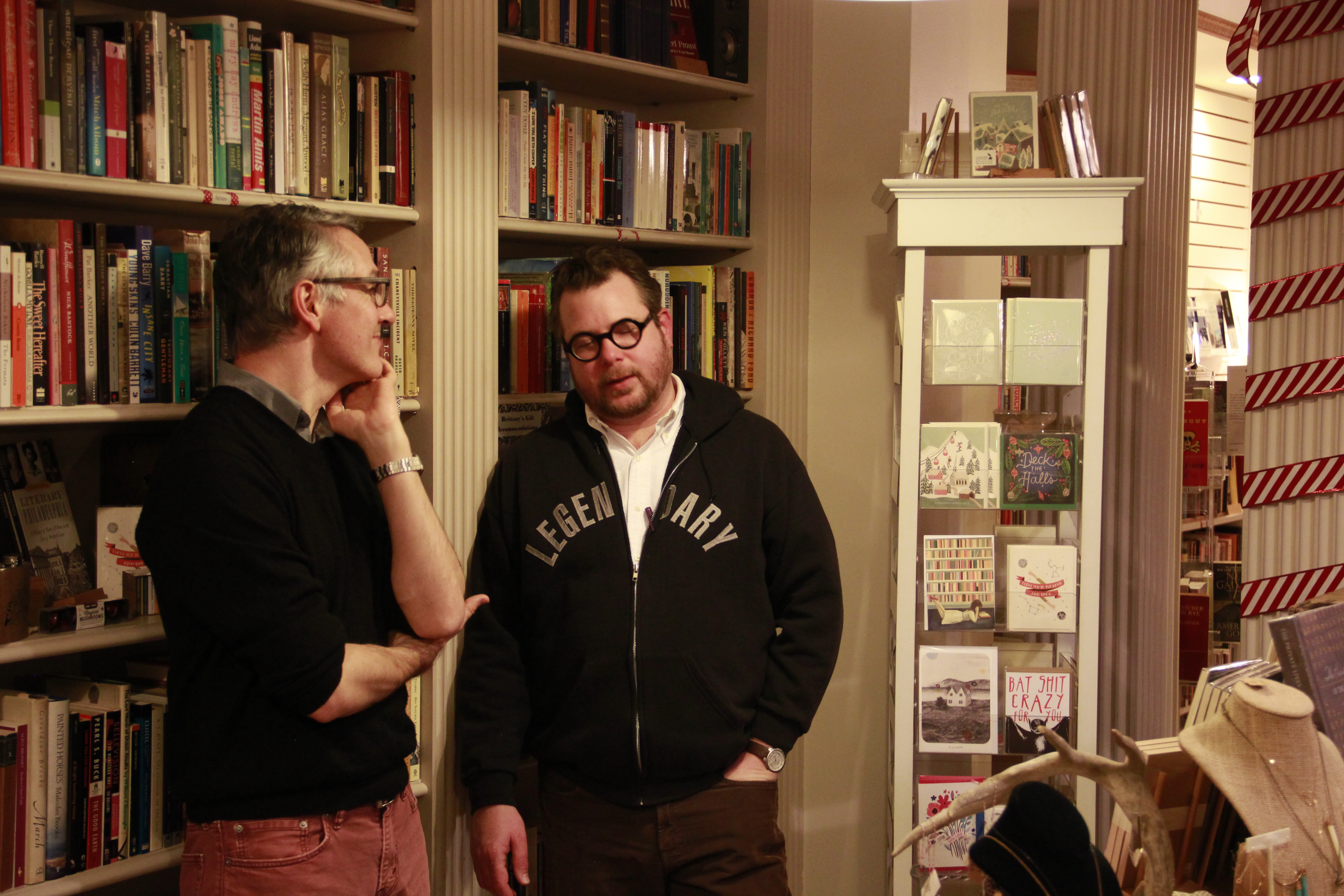 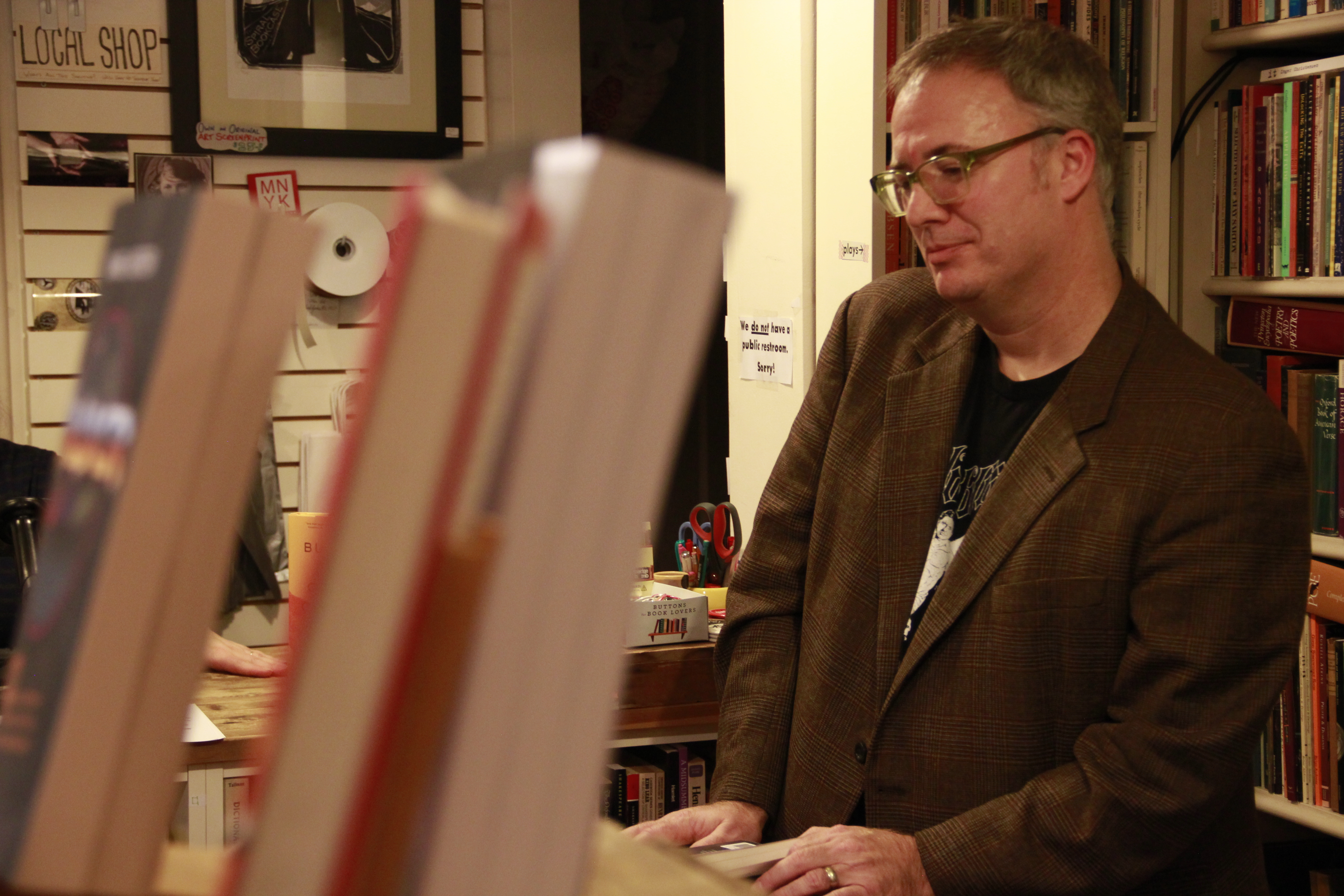 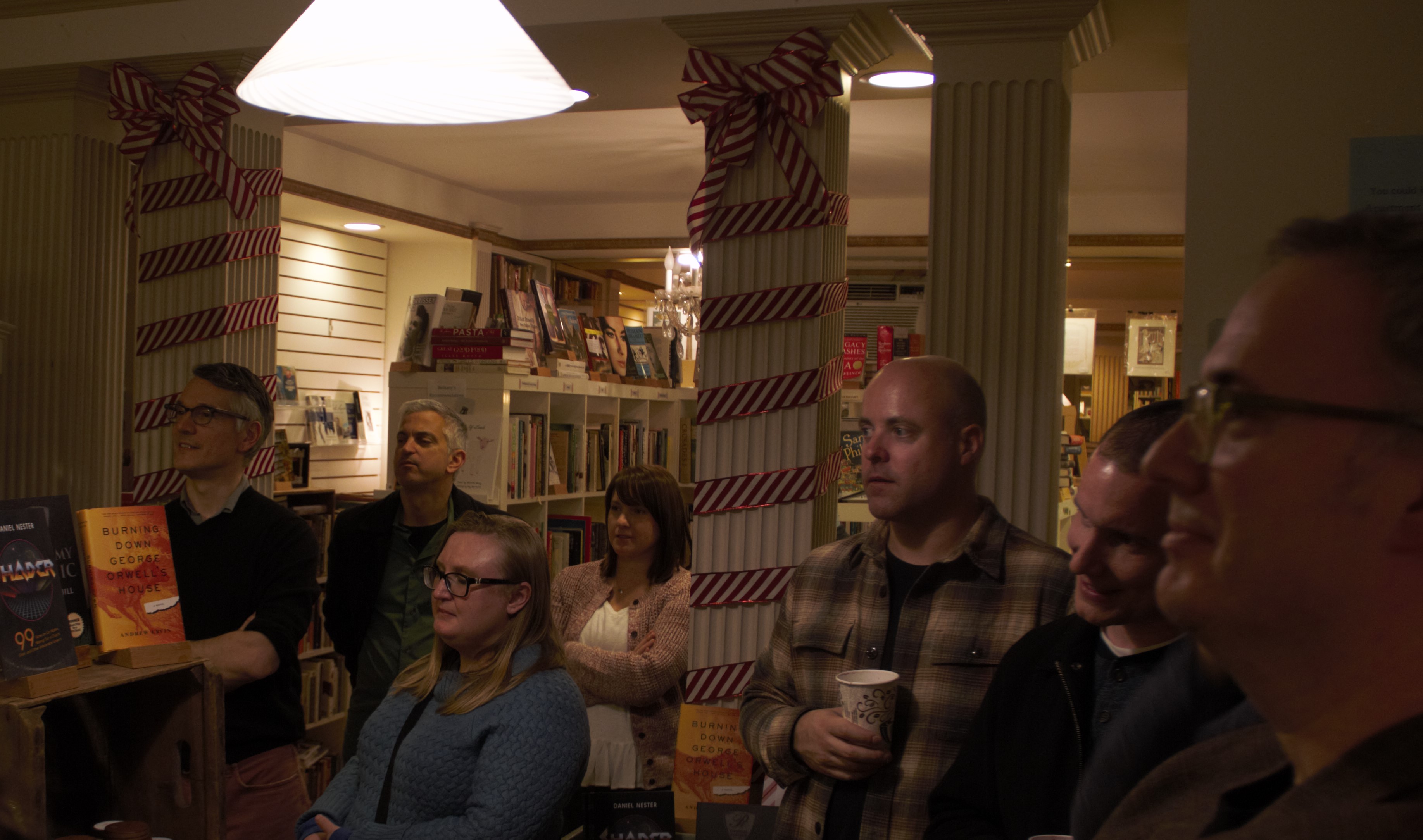 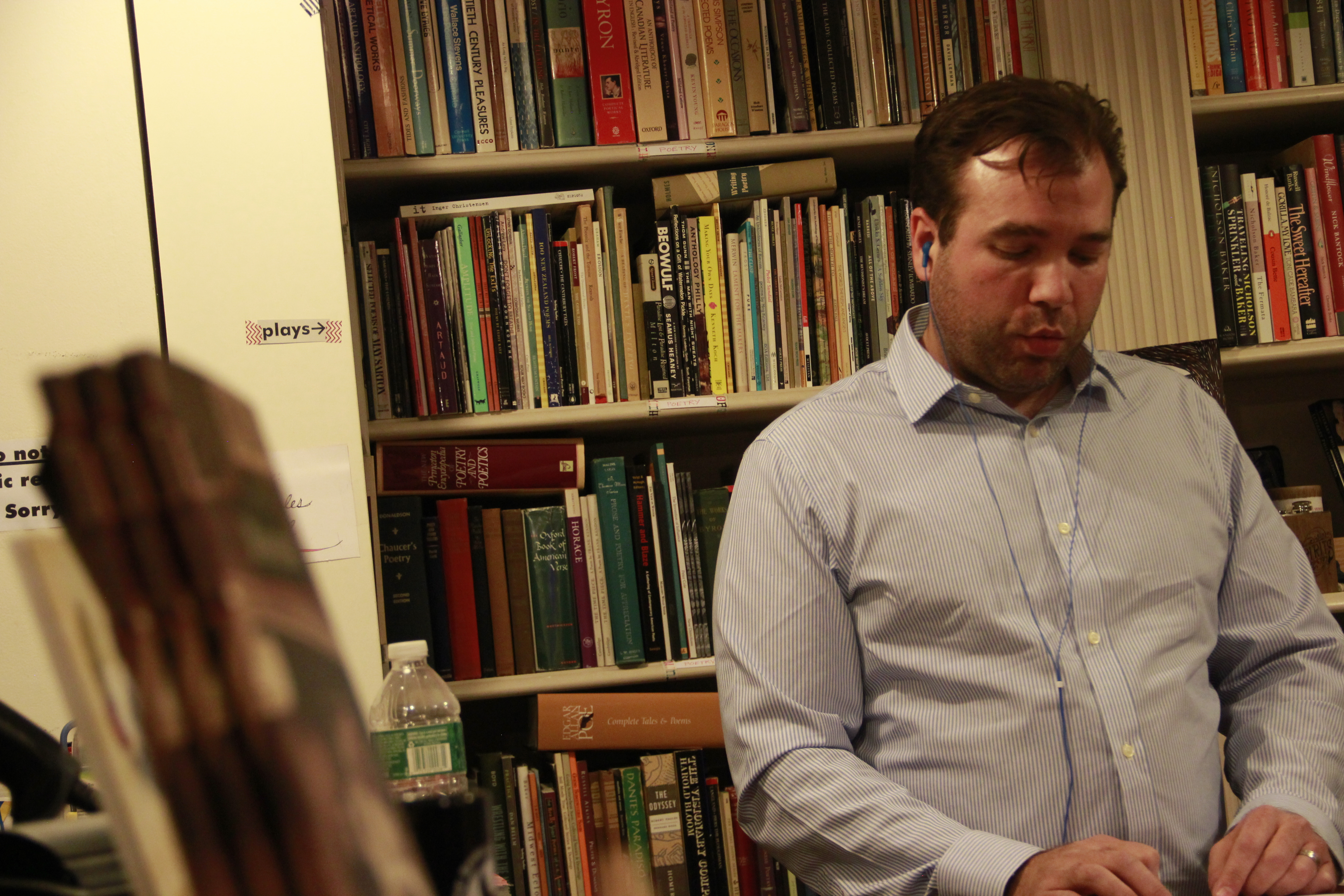 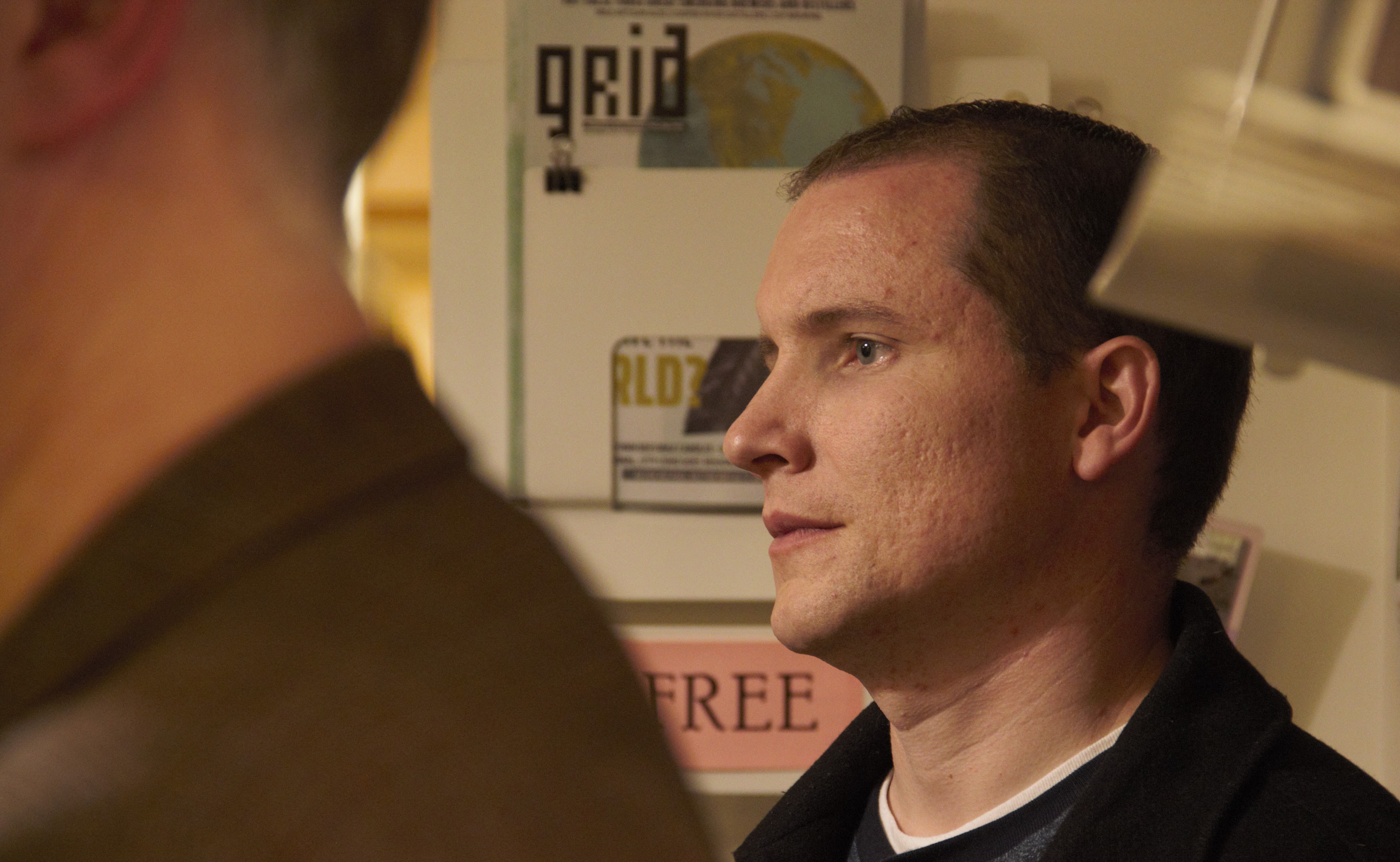 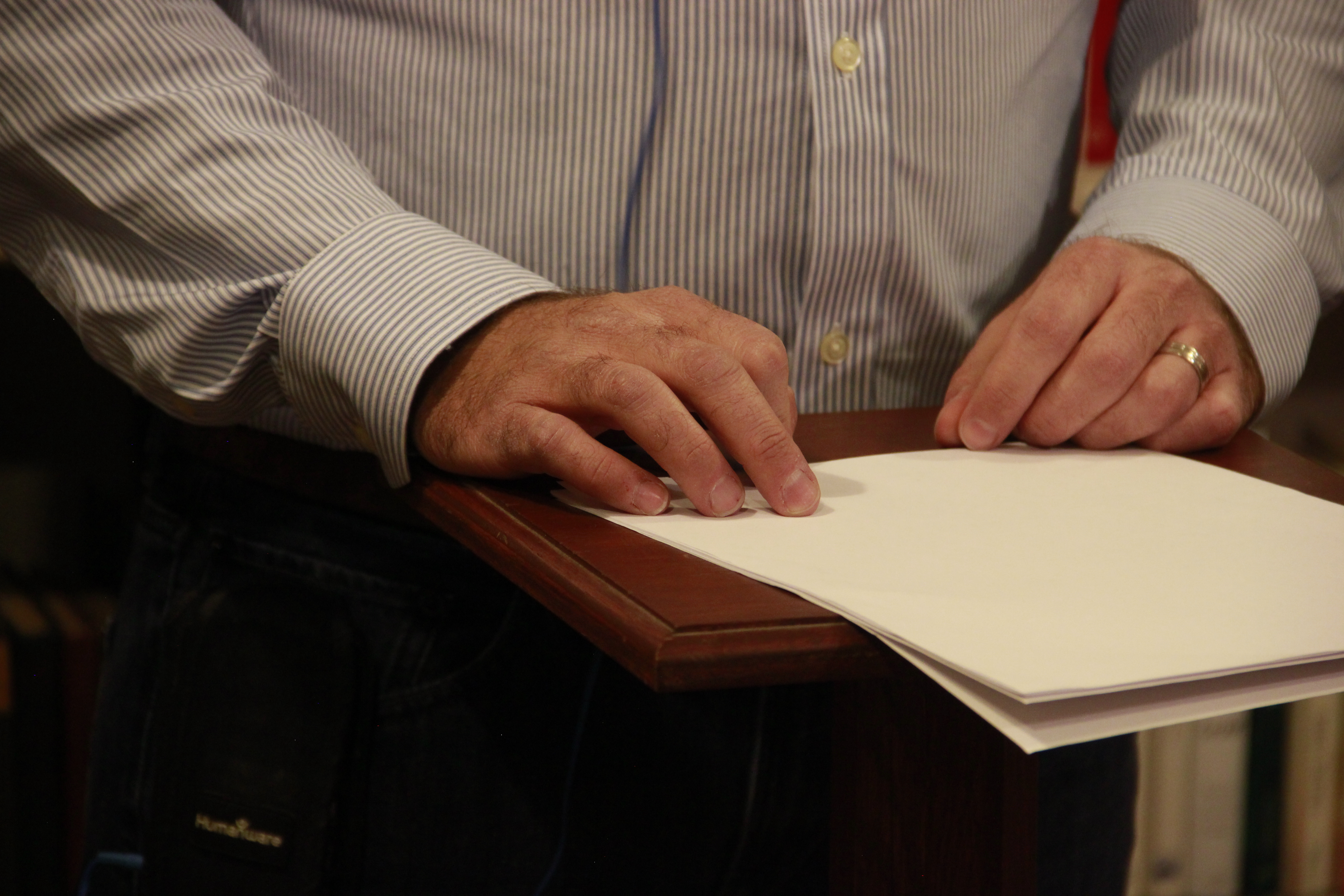 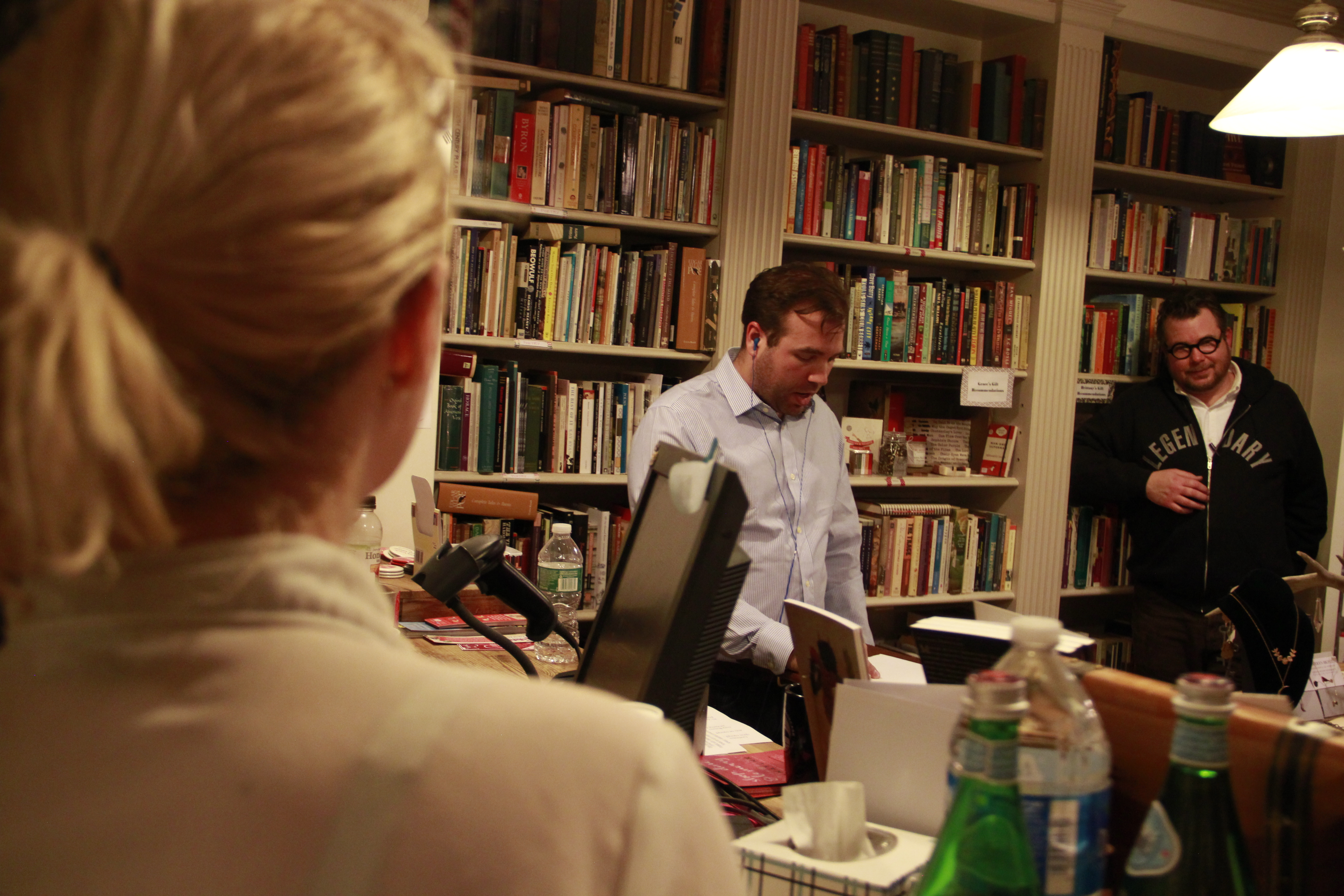 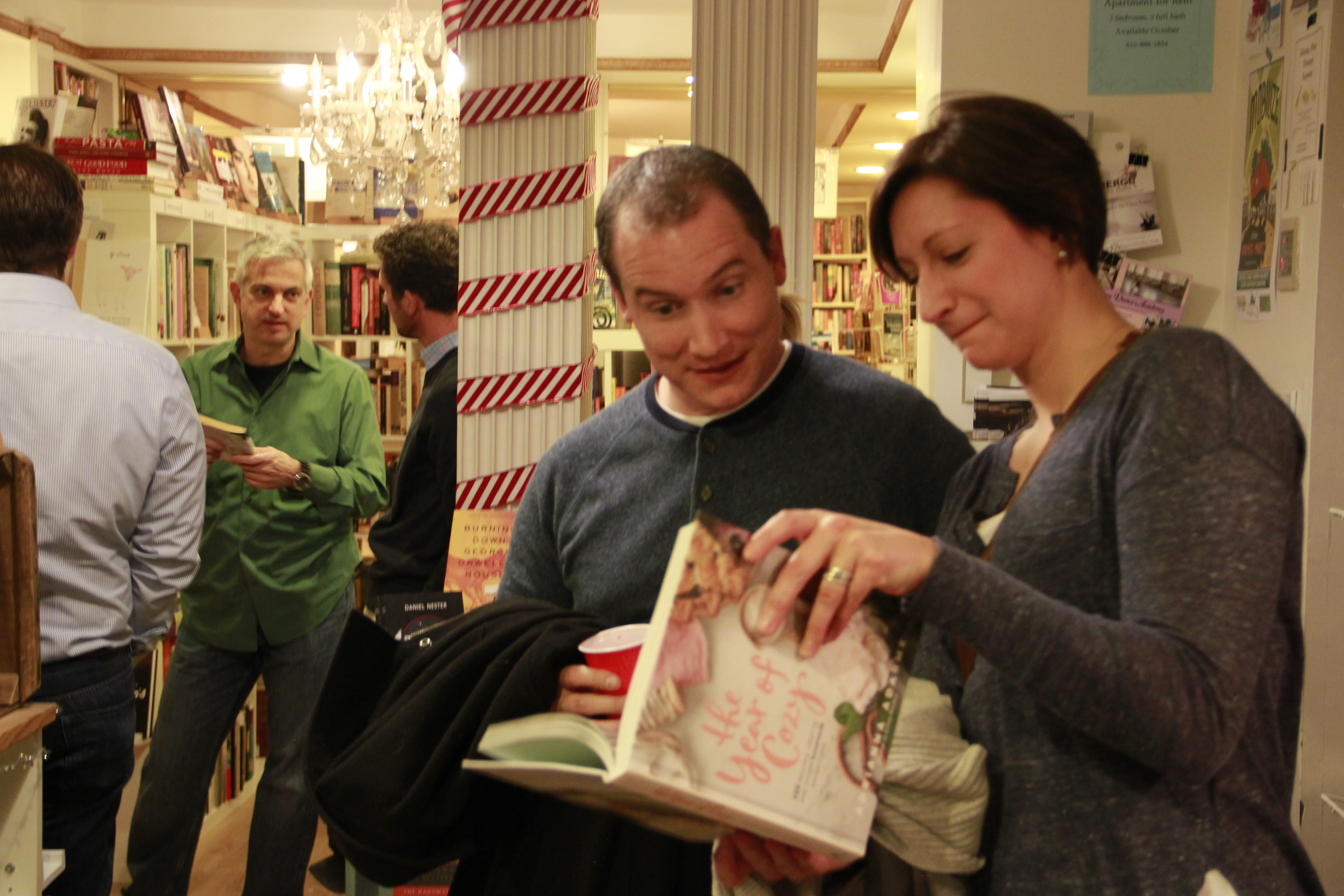 <
►
>
Tom McAllister, non-fiction editor for Barrelhouse, listens to excerpts from author Dan Nester's most recent work, Shader: 99 Notes on Car Washes, Making Out in Church, Grief, and Other Unlearnable Subjects at an event at The Spiral Bookcase on Dec. 4.

“I think the value of these events, first and foremost, is a way to sell books,” McAllister said. “But I think it also really does help. It kind of reaffirms the value of the literary community.”

Tetreault said she is most proud to be involved in the TireFire Reading Series. Run by Ingram and fellow author, Jaime Fountaine, it is held every month at the Tattooed Mom on South Street. Ingram said the series helps authors and readers connect in a casual and fun setting.

“That is the heart of our literary Philadelphia,” Tetreault said. “They bring such interesting people, and a lot of up and coming people mixed with a lot of established authors and I really appreciate their ability to combine a range of styles, poetry and prose together.”

Ingram said part of the appeal of the TireFire series is that the types of readings featured are not only directed toward writers, but readers as well.

“I like the idea of having a reading series that people who aren’t writers will come to,” Ingram said. “Not just because they feel like they need to support their friends, but actually trying to bring in people who are good readers and exciting and can do interesting stuff.”

– Text, images, and video by Alexa Bricker and Jessica Smith

https://vimeo.com/20663195] Author Tom McAllister, who grew up on the 300 block of Hermitage Street, returned last week to Manayunk to promote his book, Bury Me in My Jersey, a memoir describing his obsession with football and [continue reading…]

Ann Tetreault grew up never being denied a book she wanted to read because of the affordability of used bookstores, and would eventually go on to make this her life’s work. Tetreault and her husband opened [continue reading…]

The last thing Louis Pecsi thought he would be doing after a debilitating car accident was writing comics. At the time, he could barely think at all. “I couldn’t remember anything,” Pecsi said, recalling the [continue reading…]