Among the bright blue walls and posters full of literary puns, Kathleen Volk Miller (below) sits in a sea of papers and books. It’s a scene some might find overwhelming, but she wouldn’t have it any other way.

As a writer, professor and the director of Drexel’s new graduate program in publishing, Miller says of all the hats she wears, serving as co-editor for Drexel Publishing Group’s Painted Bride Quarterly is a job she holds near and dear since she joined the publication after college.

“I wanted to read the work of people that were alive and breathing and on the planet with us right now,” Miller said. “I was done with the classics.” 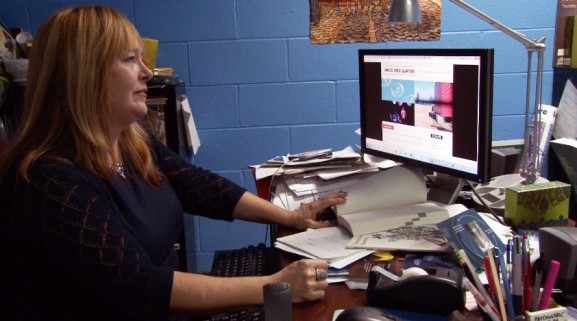 Founded in 1973, PBQ is one of the longest running literary magazines in the country, a feat Miller attributes in part to the publication’s dedication to a democratic submissions process. It is one of more than 600 active (generating content at least once per year) and more than 2,000 total literary publications in the country.

The magazine has adopted a “hybrid-publication style” – each year, the magazine publishes four editions online and one printed book that combines everything. It was a modern concept when PBQ started doing it, but it is now the practice of nearly all literary magazines.

“In the beginning, it was new and exciting and people were asking how we made those decisions and we were going to conferences,” Miller said. “Now, it’s laughable because that’s just the way it is.”
Miller describes the split of printed and online work as a perfect marriage. With more than 100 submissions received every week—in Philadelphia, New York and Abu Dhabi, where the editors are located—having an online submission process is a must.

Miller runs things from Philly while co-editor Marion Wrenn works out of Abu Dhabi, where she teaches an NYU writing program. Associate editor Jason Schneiderman rounds out the staff in New York.

“One of the things I’m most proud of with PBQ is being in those three cities and having long-term staff and rotating students,” Miller said. “I think it makes it hard to pinpoint PBQ or label it as having one narrow, defined aesthetic because we don’t. We can’t.”

An important component of how PBQ decides what work is published comes from Drexel students that participate in the publication process through co-ops. Students work in all different facets of the Drexel Publishing Group, including reading assigned submissions for PBQ for two hours each week.

“They never know what they’re going to get when they show up for those two hours,” Miller said. “But they’re getting a really wonderful broad scope of the publishing industry. They’re coming in and having a real job.”

Katarina Kapetanakis, an editorial assistant for PBQ, said getting firsthand experience in the editorial field is exciting, especially in Philadelphia’s diverse literary environment.

“In New York, you have the same five big presses and you can barely get in,” the Drexel junior said. “People want at least five or six years of entry-level experience, and for an entry-level job you can’t have five years of experience. With Philly, there is so much more room for growth.”

This welcoming environment is what helps bring a unique blend of eclectic writers into the literary scene in Philadelphia, Kapetanakis said, and keeps independent publishers teeming with fresh material.

The most recent volume of PBQ included work from Pulitzer Prize-winning poet Greg Pardlo alongside a previously unpublished eighteen-year-old, the youngest author ever published by the magazine.

“Some people have a stack of books and it’s some other people’s first publication,” Miller said. “It’s such wonderfully clear, powerful evidence that we read everybody. It’s just good work.”

Miller said deciding what gets published and what doesn’t is something interns like Kapetanakis are often most worried about in the beginning, but finding work that leaves a lasting impression is what PBQ strives for.

“When I talk to my students…they want to say yes to everything, or no to everything, or maybe all the time, because they’re panicked about what to say,” Miller said. “And I [ask them], ‘Does it resonate? Does it linger for you? Do you want to turn to somebody else and say read this?’ That’s what you look for, and that’s an intangible so it’s hard.”

Miller points to the Internet as being hugely responsible for the growth of literary magazines, but she said there’s nothing to compare to the art of actual books. Last year, Miller attended a conference in Minneapolis where she was holding print editions of PBQ.

“I sent out an email telling our authors that we were holding the newest print edition of PBQ at our booth,’” Miller said. “I had just set my phone down and immediately a girl ran around the corner out of breath asking, ‘You have the book? Can I see it?’ They’re so happy to have it and hold it in their hands and see their work. It’s the best, most rewarding moment.” 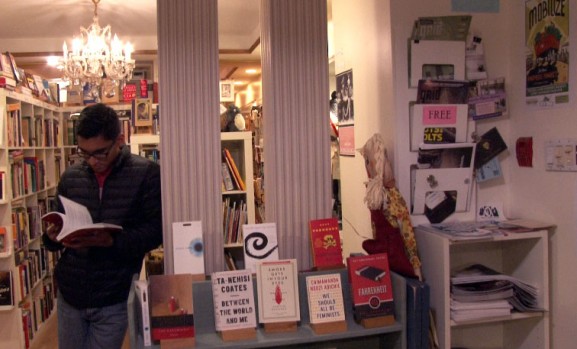 “Maybe I sound old,” Miller continued. “But lots of young people are still into them. I hope the book never dies.”

Places like The Spiral Bookcase, an independent bookstore in Manayunk, hold community-based literary events to help unite authors and readers and allow publishers like PBQ to into the needs and wants of the city. And keep books alive.

The Spiral Bookcase owner Ann Tetreault values the relationships she forms with all types of customers.

“I like how deep the connection goes with people, with authors, with readers, with the community,” Tetreault said. “It’s the type of business that transcends just capitalism. It goes alot deeper than that to create connections.”

Tetreault was raised in used bookstores. The daughter of two schoolteachers, she said she always found comfort among the leather-bound stories and dusty shelves.

“I loved it because you always knew you were going to come home with another great find or some type of treasure,” Tetreault said.

Like Miller, Tetreault believes that the printed page is something sacred. Before opening Spiral five years ago, Tetreault worked at the Library of Congress in the copyright office.

“I can identify if something is a first edition or more desirable than other works or if there are less printings of something,” Tetreault said. “I feel like the store is a combination of passions: me as a collector, me as a reader. It’s very personal.” 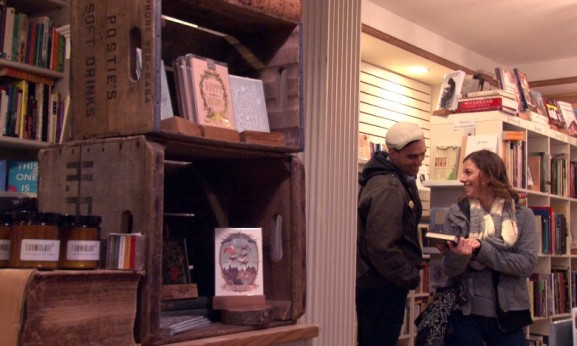 Both Miller and Tetreault believe the Philadelphia literary community is second to none. Miller attributes this to the mobility of the city and the tie of the neighborhoods. Miller said that isn’t the case for other big publishing cities in the United States.

“Our neighbors in New York think they’re so special,” Miller said. “But if you live in Jamaica Queens, you tend to do everything in Jamaica Queens. We live in Old City and still go to Northern Liberties and University City and everywhere. Philadelphia is a city of neighborhoods.”

Through their various reading series and events, Miller said PBQ and other publishers have ultimately established a writing culture that is so immersed in the heart of the city.

“It’s the City of Brotherly Love and where the first printing press was invented,” Miller said. “I don’t know if we’ve kind of just inherited what came before us or if that’s what Philadelphia has always been. But if we can just keep that kite in the air, I think hopefully it will stay that way.”

– Text, images and video by Alexa Bricker and Jessica Smith.

[vimeo 87640861] Owning a dog – known as man’s best friend – has been proven to promote a healthier lifestyle. Philadelphia has 15 dog parks for owners and their pups to go for a stroll and [Read More]

The prominent Fishtown art scene has just taken a new role in engaging local residents and utilizing a green approach for a better community through the neighborhood’s very own mascot: a fish. Throughout Fishtown, people [Read More]