In the neighborhoods east of Broad Street and south of Washington Avenue are a handful of coffee shops that are no more than 10 years old. They’re not Dunkin Donuts or Starbucks, but they’re staffed with families and baristas who consider coffee brewing their livelihood.

Despite their young stature, employees from each of the five shops below said they have a special relationship with the tight-knit South Philadelphia community.

Each barista also said residents of South Philadelphia place an emphasis on shopping at small businesses rather than visiting chains. Small businesses make up 99 percent of employer firms in the U.S. and pay almost 43 percent of the nation’s private payroll, according to the U.S. Small Business Association.

Here are five local coffee shops to check out in South Philadelphia: 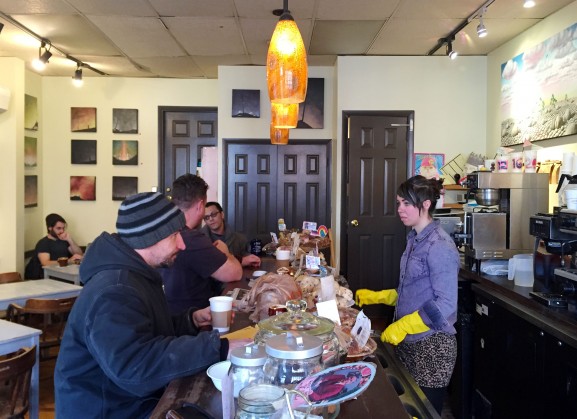 Anne Marie Drolet (above right), 27 of South Philadelphia, has been working in the cafe for eight months. She said that it’s mostly regulars who come in, which adds to the communal feel that surrounds Benna’s.

“It just has a really neighborly feel to it because everyone’s really friendly and knows each other,” Drolet said. “It’s a nice environment.” 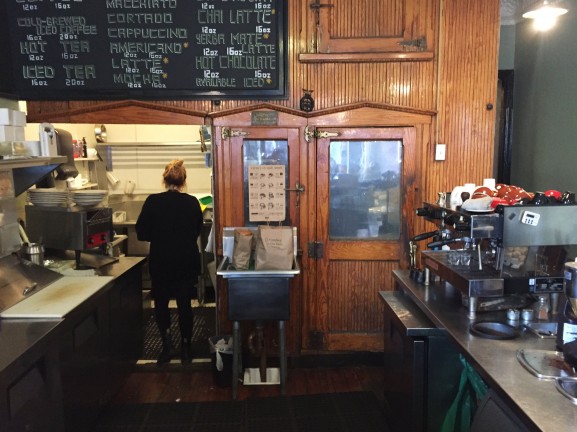 Whitney Sullivan (above), 27 of South Philadelphia, has been working at Grindcore for only a month but recognizes the familiar faces that stop in.

“I feel like the vibe is pretty laid back,” Sullivan said. “We have a lot of regulars and people in the neighborhood, and even though it’s a vegan coffee shop, I feel like people have really embraced that.” 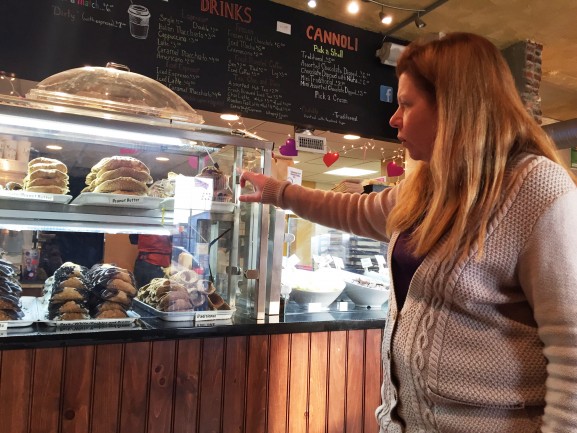 It stands apart from other coffee shops – the late-night cafe has a hot chocolate bar filled with in-store made chocolates and imported cannolis from Sicily, Italy. Heather D’Antonio (above), 46 of South Philadelphia, said she hopes for more imported desserts from Italy by late March.

D’Antonio, the owner’s daughter, said the former yogurt shop converted to a coffee shop just two years ago. As far as the shop’s relationship with the community, it’s slowly building.

“We’re about working with the community,” D’Antonio said. “We’re about doing fundraisers. We would love more of the neighborhood people here – that’s what we’re aiming for.” 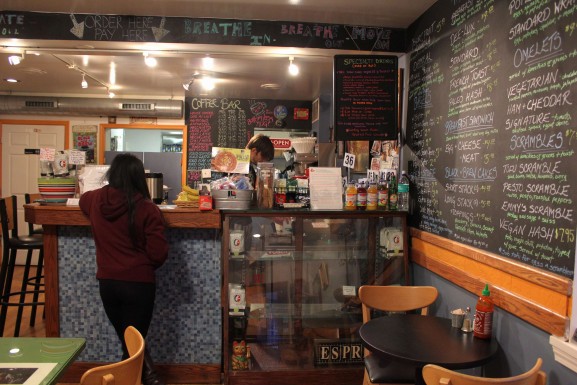 Black ‘n Brew is the only coffee shop in the neighborhood that sells La Colombe coffee, which 36-year-old barista David Caler (above) said makes the shop stand out.

Caler’s been working at Black ‘n Brew for five of the nine years it’s been open, and he claims it’s the friendliest spot to grab coffee in the area.

“Everybody knows one another,” Caler said. “I know almost all of my customers by name.”

Black ‘n Brew also offers breakfast and lunch (Caler said the breakfast burrito and the barbecue chicken wrap are most popular), with a menu that’s all natural and prepared almost all in-house. 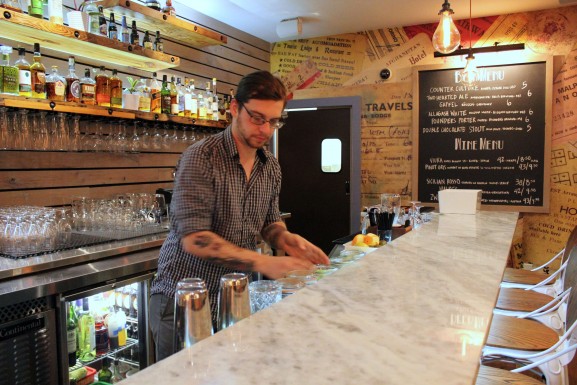 Plenty Cafe’s long hours make it a popular hangout for late-night coffee cravers, 32-year-old owner Anthony Mascieri said. The cafe doubles as a bar in the evening where bartender Scott Chuss (above), 27, offers wine on tap, beer and cocktails.

“There’s a great community relationship in South Philadelphia,” Mascieri said. “It’s a small community in a food-focused neighborhood, and people from different restaurants work together.”

— All text and images by Patricia Madej and Claire Sasko.

While walking through Point Breeze, it isn’t difficult to spot The Pharmacy, a coffeehouse on the corner of 18th and Wharton streets. On its outside wall, a large orange head spouting the number “1300” can [continue reading…]