The Oxford Circle Police Athletic League is part of a nonprofit organization that seeks to build relationships between police officers and children within the neighborhood. Its goal is to keep kids off the street and to give them a safe place to come and have fun while learning valuable life lessons.

Three years ago, Officer Bruno Estevez became the new Oxford Circle PAL officer after transferring from the Steel PAL center. Estevez made many changes upon his arrival at the Oxford Circle center, which serves 1,500 children between the ages of 6 and 14. 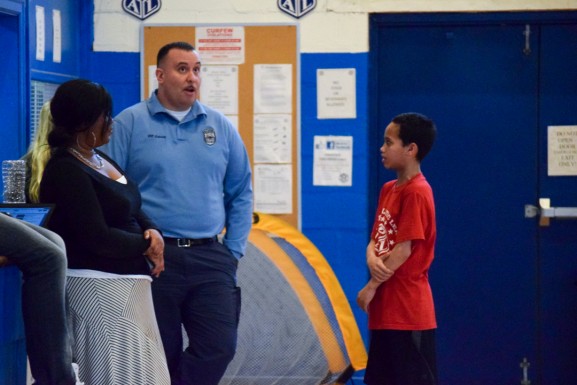 Estevez’s day begins at 1 p.m. and ends around 9 p.m. When he isn’t coaching, refereeing or cleaning up, Estevez is either taking care of paperwork or recruiting kids for the sports teams that compete against other PAL centers citywide.

He runs many athletic programs for the children year-round, including flag football, basketball, soccer, girls dance, judo, baseball, tennis and a girls mentoring program. He also makes sure that the kids get their schoolwork done.

“Homework is very important in school,” he said. “I try to teach them responsibility that way. The kids that come in at around 3:30 have to give me an hour of [doing] homework up on the stage with Ms. Tamika.”

He said his reason for being a PAL officer was so he could be more influential in children’s lives in order to make them better citizens. Estevez tries to be a positive figure who the kids can look up to so they can reach for success in their own lives.

“Most of them live in poor neighborhoods – some don’t have both parents, some might have some mental health conditions, some of them have behavioral problems,” he explained. “We try to give them a safe place where they can come in, have fun and do what they want to do, and learn some life values. I think that’s the key here.”

The kids at PAL have definitely found their safe haven at PAL with Estevez. He’s their go-to-guy for anything – whether there’s a problem between kids at the center or if they just want an outside opinion on what to do after high school, “Officer Bruno” is there.

Part of being there for the kids and helping them to succeed in every area of life means Estevez is not just someone to confide in. He is also there to correct and steer the kids on the right path.

Kevin Haughey, 12, has been participating with PAL for five years. In addition to learning sports skills, he said he has learned not to lie.

“I lied to my dad about what Officer Bruno did, and then (Officer Bruno) made me mop the floors,” said Haughey.

Though the numbers are dated, the presence of PAL has been effective in the community. The 2015 PAL annual report stated that from August 2010 to September 2012, juvenile arrests within a six- to eight-block radius of the Oxford Circle PAL Center had dropped 16 percent, compared to a 10 percent decline citywide. 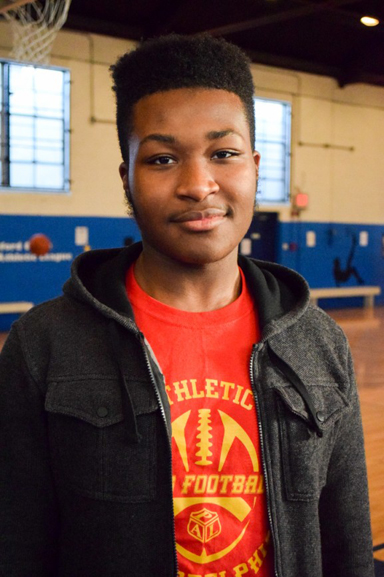 Yedaiah Bannister-Fattah (left), 17, joined PAL about a year ago as the Oxford Circle branch’s attendance coordinator and has forged a close relationship with Estevez, who recommended him for PAL Day at City Hall.

“After speaking to him, I realized he’s the right kid,” Estevez said with a hint of pride. “He’s very mature for his age, extremely well-behaved. He has goals he’d like to accomplish, dreams to get to, and I kind of felt like, ‘You know what? This is the right kid.’”

Estevez said he’s glad that Bannister-Fattah is working there, and that he’s been doing a great job.

“He comes in, he interacts with the kids, he does what he’s supposed to do,” said Estevez. “And being here, it being his first job, I can kind of guide him and say, ‘Listen, start taking more initiative – bosses like that.’”

Bannister-Fattah said he really enjoys working with PAL because it helps him become more outgoing and interactive with others.

“PAL exposes me to the community,” he said. “I’m really a quiet and reserved person, and I don’t really know too many people in this community first of all. So coming here, I’ve seen people and kids I’ve never seen before, and I’ve lived here for a while.” 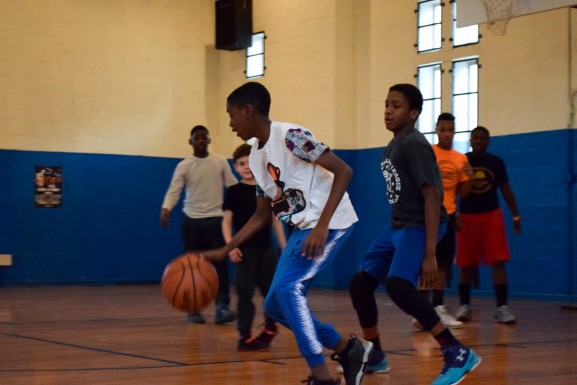 Bannister-Fattah, still deciding on what his plans will be after high school, said he is considering Temple and Drexel universities as options for higher education and is interested in possibly pursuing a degree in engineering.

Another option Bannister-Fattah has considered and sought counsel from Estevez about is joining the military.

“(Estevez) said it would be a good option because they help you pay for college,” Bannister-Fattah said.  “You could say he is like a mentor.  He informs me about the world and gives me his opinion on stuff.”

“He’s at that stage where he’s trying to figure out what he wants out of life,” Estevez said.

Whatever Bannister-Fattah’s future holds, Estevez seems to think he is on the right track by holding a job with PAL and helping kids stay off the streets. 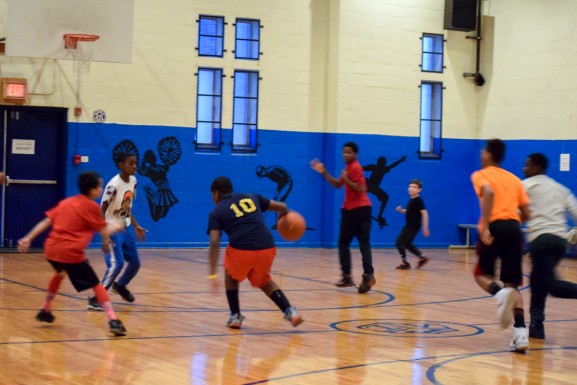 The corner of Kensington Avenue and Somerset Street in Kensington is amongst the most notorious drug corners in the city. Heroin draws addicts and dealers, making it an open playing field for crime and violence, and [continue reading…]

Lighthouse Field is home of the Philadelphia Eagles. No, not the Eagles you’re probably thinking of, but the Eagles flag football team. Find yourself at the field on a Saturday and you may have a [continue reading…]