The Puerto Rican Institute of Music sits on North 5th Street, a road surrounded by Latino influence. Walking by on any afternoon you might even hear the beat of plena – traditional Puerto Rican music – filtering out the upstairs windows.

With only a couple of classrooms, the Puerto Rican Institute of Music has about 10 teachers instructing more than 40 students. The main classroom holds enough room for a few students to strum their guitars, sit at the piano, or stand as a group to play their panderos – small hand drums.

Alberto Pagán Ramírez, the founder of the institute, prides himself on the small, tight-knit community that has formed within his school. In between playing plena with two other students, he animatedly gave them instruction and encouragement in rapid Spanish. Plena is when three people play panderos together, and Ramírez has been teaching plena and other instruments for more than 15 years.

“The school is just a school of music,” said Ramírez. “We have a concentration of Puerto Rican and Latino music because of the community, but there’s room to do so much more. If we have a student who wants to sing opera and I have a teacher that can teach it, we’ll do it. We can do music from all over the world.” 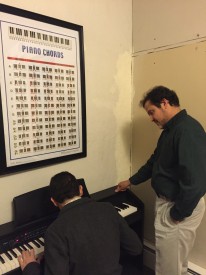 Founded in 2011, the institute will celebrate its five-year anniversary in May. As a private school, it does not receive any funding but runs solely on donations, tuition, and Ramírez’s initial investments. Ramírez wants to keep tuition affordable in order for low-income families to be able to afford classes.

The community that surrounds the institute is rich in Latino and Puerto Rican culture. Ramírez explained how he realized this five years ago. He was independently teaching classes in plena and bomba, another type of music, when he started receiving many calls to teach other classes in piano, singing and guitar.

“I realized that people were calling me when I was advertising about my classes,” said Ramírez. “They were calling me for more. There was so much desire for students to learn music.”

Having studied at two music schools in Puerto Rico, Ramírez had a very strong music background and was able to start the school. In September 2011, the institute began its first semester of full classes. 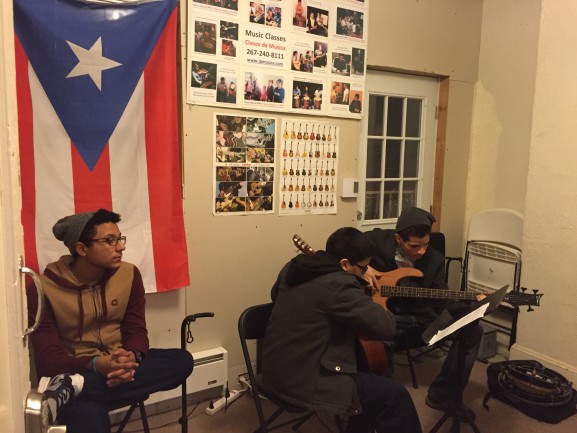 The institute holds two recitals a year, including one on Christmas. One of the student’s mothers described it as a great thing for the community where the students play Latino Christmas songs. Ramírez explained how he hopes to expand the amount of performances for the students because he doesn’t think it’s enough.

“The plan is to start a class that will create a group,” said Ramírez. “My goal with the group is to perform as many performances as we can. There are many places that will welcome students to perform.”

When looking towards the future, the institute is not looking to get much bigger. Many of the students explained how much they enjoy the comfortable feel of the classes. Ramírez went on to explain that the small size of the school allows him to be able to keep an intimate connection with the students, parents, teachers and community.

“I talk to everyone, and I think it will stay like that for a long time,” said Ramírez. 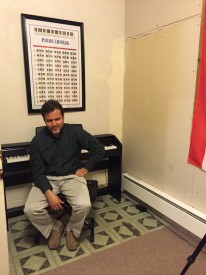 Music education has been proven to help young children develop emotionally and socially. One student, Bryan Cuevas, explained how much the institute has affected him. Cuevas has been taking classes there for about five years.

“At first, I wanted to play a percussion instrument and I found out about the institute through a store I went to,” said Cuevas. “As soon as I got here, I started playing bomba and even though at first I was really shy, I kept coming to classes I just started to love it, and now I’m in love with it.”

The Puerto Rican Institute of Music is open to everyone who wants to come and learn music, says Ramírez.

“If you want that Latino spice, you are welcome here. You can learn any instrument from piano, guitar or singing,” he said. “You’ll be exposed to a different environment and a different kind of music!”

– Story, photos and video by James Kirn and Coleen O’Hara

BridgeSet Sound is a music head’s dream. Whether you are looking for vinyl records, musical instruments of all kinds or even lessons, BridgeSet Sound, located at 710 South St., is the place to go. Steven Harner (left, above) and [continue reading…]

https://vimeo.com/50039305] In an effort to expose more local children to the arts, the Salvation Army Ray & Joan Kroc Center joined forces with the New York Staff Band and Carol Jantsch of the Philadelphia Orchestra [continue reading…]

For the 50 students in Dorina Morrow’s advanced vocal music class at the Philadelphia High School for the Creative and Performing Arts (CAPA,) the choir room is their stage. Standing three stairs deep in front of [continue reading…]