The Charles Santore Library’s exterior looks like your typical municipal building — it has white walls and an architectural style that was making waves in the 1950s and 60s.

In the diverse and lively neighborhood of Bella Vista, the building may appear dull to some, but for those who have experienced the programs and the people inside it, curb appeal becomes an afterthought.

“It’s the best library in the city in my opinion,” branch manager Jeanne Hamann said. “I really feel it’s the community that makes it such a special place.”

Opened in October 1963, this Free Library of Philadelphia branch was first named the Southwark Library, due to the original location’s base of operations (opened in 1912) on Fifth and Ellsworth streets in Queen Village, an area created in 1762 that was called the Southwark District by British colonists. In March 2004, the library was re-named after the former boxer, Republican ward leader and South Philadelphia native Charles Santore. 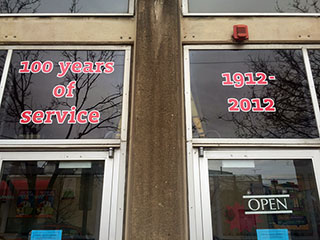 Santore would be proud of the services that the library has to offer and the diverse amount of people who walk through its doors to utilize them. Events like “Spanish Storytime with Senora Yenni” help children who struggle with reading English learn the language, while also promoting the benefits of being bilingual for younger English-speakers. The library provides the opportunity to receive a GED through adult education classes, and is also included in the LEAP afterschool program.

“We offer homework help on anything and I have three teen assistants who help me out,” said LEAP leader Becca Dent. “There’s always something going on and people coming in and out. I love the kids here, they’re full of energy and really want to learn, grow and develop.”

The library’s focus on working with children provides the community with a sense of pride. The library won the 2016 Most Creative Flower Display at the Philadelphia Flower Show. Up against displays from high-end stores around Rittenhouse Square and other high-profile areas, the Charles Santore branch had something that the others couldn’t replicate — the effort of a community.

“We worked with the kids to make the tissue-paper flowers that are in the window,” Dent said. “The judges just loved that we included the children in the making of the display.”

Rawk U School of Music Rocks [vimeo 53972340] Music has been a part of Daniel Cullen’s life ever since he first picked up an acoustic guitar when he was 11 years old. Now Cullen has the [continue reading…]

Artist Jody Pinto envisioned her ancestors traveling to Philadelphia by ship, staring out at the land ahead. With that, she came up with the idea for the Washington Avenue Pier sculpture Land Buoy. The sculpture honors a [continue reading…]