The fenced-in block at 29th and Tasker streets stood silent on a cloudy Saturday in March.

It’s the way Lanier Playground has looked for some time. But the dug-up ground and construction equipment that was left in place that weekend were a sign that it wouldn’t stay that way much longer.

Plans to redo Lanier were made official at a community meeting back in January at St. Gabriel’s School on the 2900 block of Dickinson Street. City officials – Councilman Kenyatta Johnson chief among them — presented the plans, which included room for a new baseball field, dog park, walking path and amphitheater — at a cost of around $1.2 million. That vision is dependent on funding from the state’s budget and the real work likely won’t start until the fall 2016.

To say it’s been a long process, might be an understatement.

The renovation was an idea seven years in the making, according to Denise Bradley, the executive director of the Grays Ferry Civic Association, which has been helping to oversee the process. Several roadblocks, however, have kept previous plans from getting off the ground.

Although it took a while to get anything moving on the park, which closed in 2005 and hasn’t been active since, there eventually was an answer. 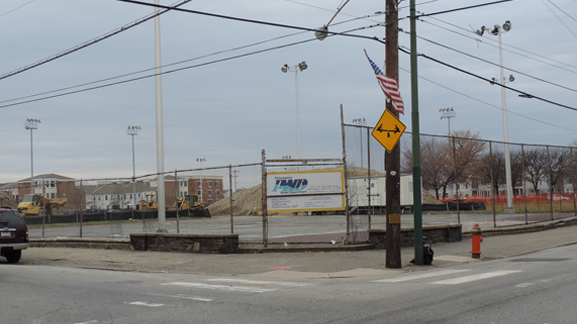 The Philadelphia Water Department had already been digging up the property to make federally mandated stormwater management improvements to the park grounds. With that work already underway, Lanier’s revival was a matter of being in the right place at the right time.

“They have to fix it,” Bradley said. “So might as well throw the additional in there and get [the park] fixed.”

The immediate hope out of Lanier’s renovations is that it will offer a place to go for Grays Ferry’s youth, an aspect of the community that members of the Civic Association knew needed to be addressed.

“When you drive around, there is very little opportunity for local kids to gather, and meet and engage with things that are positive,” Carmine Zulli, a board member on the civic association, said. “A lot of recreation centers that we have here are blighted and neglected to some extent.”

“So we will give the kids here, who very often have little or nothing to do, a place to get involved in maybe some league activity,” Zulli added. “Or some things that they possibly otherwise wouldn’t get involved in.”

The work doesn’t stop once the park re-opens, however. There is also the issue of how to maintain the park afterward, which Bradley said there is a plan for.

“A lot of that is falling back onto the community,” she said. “There are several committees that we are setting up that will maintain the area.

“The city will be responsible for stuff like keeping the grass mowed,” Bradley added. “But as far as actually cleaning it, picking up trash, putting the trash out on the curb and calling the city and saying, “hey, we have a pickup,” keeping the dog park clean, making sure that everything is stocked for, that is going to fall on the committees that are being built for the care of Lanier.”

Zulli said that he fears Lanier would become just another blighted space after renovations if there wasn’t any community involvement to help support. Bradley agreed.

“We’ve been asking for years to help us, help us make our neighborhood better, help us to clean it up,” Bradley said. “How can we finally get an answer from [the city], and finally get what we asked for and not be willing to do the work for it?”

“We can’t ask for the help, and say we want this and we want it for our children unless we are willing to put the work in for it,” she added. “It falls back on us. If we want to use it, and want our puppies run around and have a good time, then we have to be the ones take responsibility for it.”

Also in the long term, the civic association is hoping the new park will be the first step in a string of many ways to improve the community.

Carin Zulli-Heins, another board member, said a big focus of the civic association is on the beautification of the area.

“I believe strongly that you should feel pride for where you come from, pride where you go every day,” she said. “Depending on different ways you come into neighborhood, you see that, you see beautiful things, you see well-kept areas. But for the majority of our area, it’s not that way.”

“What we’re trying to do with our group is work with the community, pinpoint the areas that they find are eyesores, that they think could be a nicer place to be,” Zulli-Heins added. “And then we draw that small section of the community to help try and make it better.”

Better unifying the community is also a top priority. 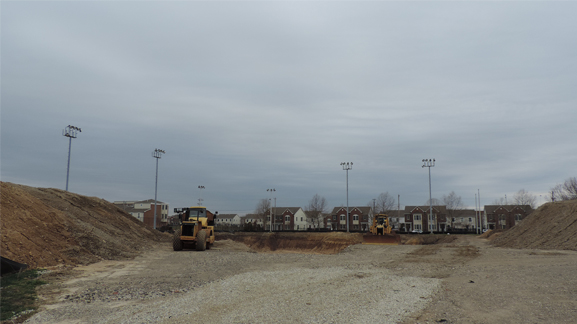 Recalling what the playground looked like before the Water Department began digging it up, the civic association members summed it up as a fenced-in field of grass that was neglected and filled with trash.

But Carmine Zulli also noted the neighborhood’s history, which involved racial tensions and the playground itself serving as the dividing line between camps.

“It pretty much acted as a de facto border between two parts of the community that were at odds with each other,” he said.

As a playground itself, Carin Zulli-Heins remembered broken glass on the basketball court, unkept grass and the enclosing fence, which she said won’t be there by the time the park does re-open.

“Symbolically speaking, looking to move forward, the fence will not be there,” she said. “I think that alone speaks volumes in connecting the community.”

“Instead of using the fences as a barrier, by removing them or making them smaller, it becomes a nexus for the entire community,” Carmine Zulli said.

Zulli-Heins acknowledged Grays Ferry’s past, and how it created an image of racial tensions and violence, one that can easily be found in any local news article on the area from the last 25 years. But she said the Grays Ferry that exists now doesn’t line up with that image anymore.

Instead, the civic association and the community as a whole are pushing ahead.

“Move forward and progress,” Zulli-Heins said. “If you look within this community, the diversity is great. There are wealthy people, there are impoverished people, you got beautiful houses, you got ugly houses, there are people with master’s degrees, people with an eighth-grade education, it’s all here. Not one makes any person greater or lesser than the other, and I think that is what we’re trying to move forward with.”

Andrew Suh, another fellow board member and a newer resident to Grays Ferry, said the neighborhood’s diversity was a big reason for why he chose to move there, describing Grays Ferry as a good microcosm of all that Philadelphia has to offer, both good and bad.

Suh admitted that there is still a lot of separation between different groups, but added that a renovated Lanier could help to remedy that.

“We do have Vare Rec Center and Stinger Square,” Suh said. “But I think Lanier is a lot more centrally located than those two parks are, and I think having Lanier Park be sort of a spot where people can hang out and interact could do a lot to bring people together.”

As for Zulli, Bradely and Zulli-Heins, each lifelong residents of Grays Ferry with families there too, Lanier is an opportunity to make their home better.

“I don’t actually have to live here,” Bradley said. “I choose to, because here I can make a difference.

“All of my kids are grown and in college, and I spent my life, I guess nurturing, grooming and I’m just continuing to do so. I have the time now, and I see that we can make a change. So this project can actually be the catalyst for that.

“For me, Grays Ferry is home,” she said.

Sweat trickled down muscled backs, down onto the blue canvas stretched over a wooden frame which was pieced together by a carpenter from down the block. Fluorescent lights flickered over the glory of former champions [continue reading…]

Since the beginning of May there has been a massive construction project on Livingston Street in Port Richmond. The block, along with many others throughout the neighborhood, is being reconstructed to replace old pipes underground. [continue reading…]