The American Street Empowerment Zone is all about facilitating job creation and economic development for Kensington – two things that aren’t easy and require diligence and patience.

“It takes time. Economic development doesn’t happen overnight,” said Aiisha Herring, director of economic development zones for the city Commerce Department. “Some people moving to these places think it just happened, but it takes a long time to see this work.”

Created in 1994 by the Clinton Administration to address urban blight, low education attainment and high poverty rates, the American Street Empowerment Zone was chosen based on Census tracking.

As the designation was coming to a close in 2004, the city put aside an endowment specifically to help keep the zones going. According to Sara Lepori, the manager of the American Street Empowerment Zone, $5 million was set aside then, and now, through accruing interest, the fund is up to $28 million.

“We give out up to $1.2 million a year in grants, and this allows us to keep the program going long term,” said Lepori. “Anything more and we would cut into the principal and this would affect our ability to help businesses.”

From 2009 to around 2012, the program took a break from distributing grants in order to focus on where the funds were going. Led by community trust boards, a strategic planning program was set up to establish funding priorities such as commercial corridor revitalization, financial literacy initiatives, scholarships and promotion of retail businesses.

The types of grants that the program provides are broken down into a variety of categories with different amounts given for each. The application process is unique for each grant and can often be a challenge for some to complete.

According to Herring, businesses are turned down because they aren’t prepared financially, haven’t properly met the standards of the application, or the project does not fit the review committee’s goals for development. Since 2013, more than 40 grants have been approved.

“The application required a lot of detail and back and forth with our contractors and consultants, to make sure everything was listed correctly,” said Timothy Patton, owner of St. Benjamin’s Brewery, who has just received a $25,000 business development grant. “We also had to make sure they don’t deviate from what was in the grant after the fact (small changes always happen in construction). So there has been a bit of time spent on oversight.”

For businesses that are less prepared for the rigors of the process, the Philadelphia Commerce Department has teamed up with the Welcoming Center for New Pennsylvanians and the Enterprise Center to help less experienced and struggling businesses to have a chance.

“We’re trying to figure out how to help business owners that aren’t as sophisticated as others to get resources,” said Herring. “It’s a challenge because we can’t give the money to everyone. We try to be innovative and creative but we have certain controls.”

According to Lepori, the grants are approved on a rolling basis. The wait time for approval takes from two weeks to two months, depending on the size of project. For those denied, they have to rely on their persistence.

“If someone comes in multiple times, we really want to be able to make sure lots of different organizations and businesses have the opportunity to access those funds, so we want to be able to help,” said Lepori. “So they will likely be told to apply again and hopefully, we can get to them in the next few years.”

Despite its best efforts, the program still takes time to affect certain areas in the zones. According to Herring, gentrification has a way of bringing attention to an area, which helps, but it also causes high-needs areas to develop slower because of progress in neighborhoods like Northern Liberties and Olde Kensington. 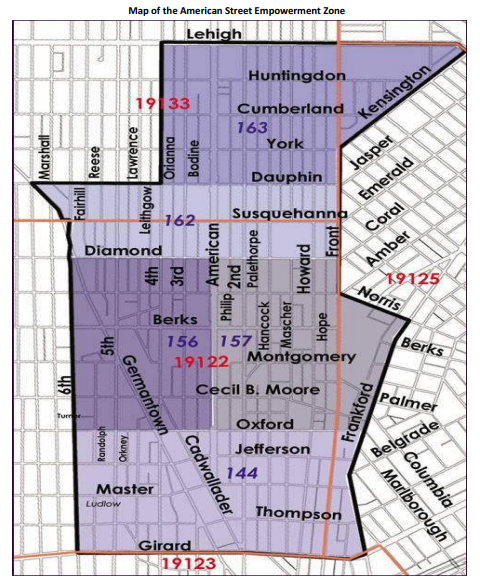 “It’s hard because we are pushing to get more towards the North-Central area, but it just takes time,” said Herring. “The market has taken care of certain places in the lower area of the American Street Zone, but I want more interest in the Lehigh Avenue area. You have to think about it long term.”

Although the nonprofit organizations Taller Puertorriqueno and Ceiba, along with a few small businesses in the northern area of the zone, have been given grants for financial literacy and storefront improvement, the hope is that more development will happen. A report done by the Department of Commerce showed that businesses on East Passyunk Avenue that participated in a Storefront Improvement Program saw a 44 percent increase in receipts from 2010 to 2012, compared with a 13 percent increase for businesses that did not.

“To be able to assist someone in activating an abandoned building has a big effect, long term, on a commercial corridor,” Herring said. “By adding an anchor to attract other things, we’re looking at the bigger picture.”

There are a lot of fun things to do in Philadelphia, but for the amateur athlete who loves to run, there are many unique ways to get involved. Whether it’s dressing up in your favorite [continue reading…]

Mount Airy is known for having well-known politicians as residents, however, the area was quite stirred when the president of the United States came to their section of the city. President Barrack Obama was in [continue reading…]