It has been a decade since the 2006 demolition of much of what was once the Philadelphia State Hospital, more commonly known as Byberry.

The mental health institution, established in 1906, quickly found itself in constant battle for funding among the city of Philadelphia, the state and the hospital’s staff — all, many said, at the expense of the mentally ill patients. This battle continued until the institution closed in 1990.

When the city first purchased the farmland in Northeast Philadelphia, the idea was Byberry would clear Blockley Almshouse, a poor house and charity hospital located in West Philadelphia, of the overcrowding issues it faced.

“Blockley really just became a showcase for how bad the city could manage the unmanageable,” said John Webster, author of The Philadelphia State Hospital at Byberry. “And Byberry was a way to improve upon that situation.”

Instead of being held in a single building, patients would work on several of Byberry’s farms — far from the eyes of the city—under the concept that hard work, fresh air and light could cure them. This moral treatment approach was what the private Friends Hospital (pictured below) also used during these early years. 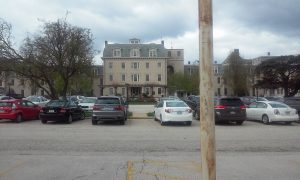 Dr. William Uffner, a psychiatrist at Friends since 1976, explained the importance of moral treatment.

As patients filtered up to Byberry, the site changed its name in 1907 to the Philadelphia Hospital for Mental Diseases. The plans called for initial construction of two sets of cottages meant for a men’s group and a women’s group, as well as staff.

The institution dealt with constant overcrowding and funding issues. Psychiatrists and superintendents pleaded for help from the city, but the struggle continued.

Rumors of patient abuse and terrible living conditions led Mac Parker, a Philadelphia Record photographer, to take undercover pictures that verified these claims. His images sparked outrage and Pennsylvania took control of the institution from the city in 1938.

But the state wasn’t much better.

In the mid-1940s, Charles Lord was a Quaker conscientious objector who worked as an aide at Philadelphia State Hospital and took more revealing pictures of the institution.

“You could see what the conditions were like — it was horrible,” Uffner said. “Just a big room, no rugs, concrete floor…bare walls and patients milling around all naked.”

Patients were left with little care from an overwhelmed staff and remained holed up in rooms due to the lack of clothing.

In 1946, Byberry had its longest-tenured superintendent, Dr. Eugene Sielke, take over. Sielke remained in the role until 1965, running Byberry during a mostly more positive stretch of time.

By 1959, however, overcrowding put Byberry in the headlines again. On May 31, the Philadelphia Bulletin featured a patient’s letter about the horrible conditions and lack of care. Six years later, in Sielke’s final year in charge, the Philadelphia Inquirer reported more than 6,300 patients were at Byberry, which had a capacity of 4,800 at the time.

In 1963, the Kennedy administration pushed for deinstitutionalization to address the issues. Sielke also oversaw the next phase of mental health treatment that helped in deinstitutionalizing — the introduction of anti-psychotic medications.

Thorazine provided psychiatrists with an option for their patients in 1952. When they looked for imitations of that drug, initial tests on agitated patients showed an increase in their mental activity. So they tried it on those diagnosed with severe depression.

“They were looking for a Thorazine knockoff that they could…maybe improve on Thorazine, and in fact, stumbled across the modern antidepressant medications,” Uffner said.

The shift to medication dramatically changed how long patients were treated. People who needed months of hospital care could be well enough to leave in two to four weeks. After Sielke resigned, Dr. Daniel Blain took charge in 1966 and used these new medications to reduce the patient population down to 2,600.

“It was thought of as the cure,” Webster said. “It’s going to end this whole institutional thing and, unfortunately, that didn’t happen.”

Diana Piperata (pictured below) was interested in psychology and had once planned on working at Byberry, but the hospital closed before she graduated from Temple University. Piperata now works as the clinical director at Self Help Movement, a drug and alcohol treatment center which operates in one of the remaining buildings left standing from the era. 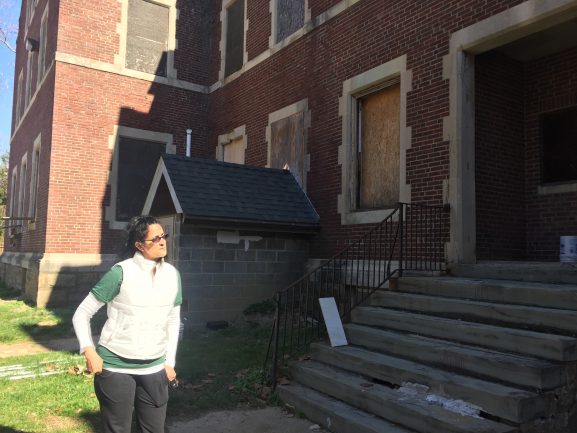 She said deinstitutionalization wasn’t planned with patients in mind after their release.

“They shut down the facilities and put the individuals who were getting this intensive level of care into outpatient, if you will, community treatment,” she said. “It was a very big fail, but they just didn’t have the vision to see that it was going to be a very big fail.”

The closing of Byberry was a long and arduous process. The hospital transferred patients to other facilities, dealt with diminished funding and made further staff cuts. In 1987, newly elected Gov. Robert Casey set a deadline for Sept. 30, 1989, for the facility’s closure.

But as the deadline approached, three former patients drowned in 1989 — Tyrone Gainey and Joseph Gutgesell in the Schuylkill River that August and Joseph C. Thomas in Pennypack Creek two weeks later.

Byberry slowed its transfers and the final patients left on June 21, 1990.

“It was a few hiccups in the process, but they eventually did get it closed, which was the only answer,” Webster said. “[It] was definitely the right thing to do.”

It brought relief to the local community, but ended a very sad chapter in Philadelphia’s mental health care story.

“Yes, we have learned, but the shameful part is we knew it all along,” Piperata said. “It got twisted along the way. People started doing things that were not humane…we forgot it somewhere along the way and then had to remember it.”

https://vimeo.com/24965905] Professor Roger Barth of West Chester is not your ordinary chemistry professor. The name of one of his West Chester University classes is called “The Chemistry of Beer.” Yes, that brewed alcoholic drink that [continue reading…]

The physical benefits of sports and exercise have long been established. Staying active can help fight disease, improve your immune system and show better character traits to help you develop as a person. But what about [continue reading…]

In 2016, Philadelphia will be going through a change. City Council districts will be changing and bringing areas under new direction and jurisdiction. The Councilmanic Districts bill, passed in 2011 by City Council, states the [continue reading…]