“It was important to us to get involved in the community, and be a part of Manayunk and the culture here,” said Chris Barnes, managing partner of Lucky’s Last Chance. “It was more than having a business on Main Street.”

Barnes said that he and his partners Sandra Barnes and Mike Gartner, along with their employees, take a community-minded approach to doing business in Manayunk. It’s a concept that includes supporting and working with other local businesses, and it’s a concept that J.D. Korejko, owner of comic shop Johnny Destructo’s Hero Complex, understands firsthand.

“I opened up in September, and it’s been going well,” Korejko said. “But Chris (Barnes) was nice enough to say, ‘Hey, why don’t we try and promote your shop? We’ll do an art showing upstairs at Lucky’s.’”

Korejko was able to curate an art show in the second floor dining area of the restaurant. Illustrations by a number of artists, including Korejko, who goes by the pen name Johnny Destructo, can be enjoyed and purchased.

“It’s a way to promote my shop and comics in general, and gives people upstairs eating burgers something nice to look at,” Korejko said with a smile. 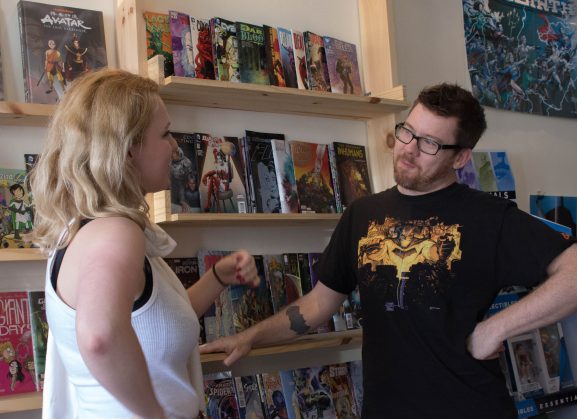 Barnes and his team have also cross-promoted with other restaurants. Lucky’s Last Chance worked with Bourbon Blue to craft the “Who Dat Burger,” which was available in February. Barnes said he sees no problem in having this kind of relationship with would-be competitors.

Along with mutually beneficial endeavors like these, Barnes said the community-minded attitude of Lucky’s Last Chance includes coming together with other businesses through charity events.

“When we worked together, everything just became bigger,” Barnes said.

Barnes said that businesses including, but not limited to, Sweet Elizabeth’s Bakeshop, The Little Apple and Volo Coffeehouse have all contributed to events that Lucky’s Last Chance has held.

“We reached out to some of these other storeowners and said, ‘Hey, would you be willing to donate something for this?’” Barnes said. “Then all of a sudden I wasn’t even making phone calls, people were calling me saying ‘Can I donate to the Weiner Race? Can I donate for this cancer charity you’re doing?’”

Lucky’s Last Chance holds the annual Weiner Race in honor of National Hot Dog Day. It raises money for the Philadelphia Animal Welfare Society (PAWS), an organization that helps homeless and abandoned animals in Philadelphia. The event is a lighthearted race between dachshunds in hot dog costumes in the alley next to the restaurant.

“It’s a ton of fun, and it’s one of the most whimsical kind of days down here,” Barnes said.

“And in case you’re looking for them to actually race up the course – I think in the finals last year, only one dog actually crossed the finish line,” Barnes added with a laugh. “The rest of them ran about fifteen feet, looked around and stopped, wanting to be pet.”

The Joe Bash is an annual event at Lucky’s Last Chance that supports Down Goes Cancer – The Joe Mak Memorial Foundation, an organization that raises money for local families struggling with cancer as well as cancer research.

“It’s a night where we donate 100% of the proceeds from the beers that we sell,” Barnes said. “And we sell some additional things here to raise additional money for that cause.”

Barnes serves on the board of the Manayunk Development Corporation (MDC), an organization that manages and promotes business development on Main Street.

Jane Lipton, executive director of MDC, said that in the early to mid-2000s, Main Street developed a reputation for catering to partying college students. Now, Lipton said restaurants like Lucky’s Last Chance have helped to redefine Main Street as a place that caters to a wider demographic.

“People like Chris (Barnes) are part of what helped us turn around our story, especially when it comes to young people having a good time,” Lipton said. 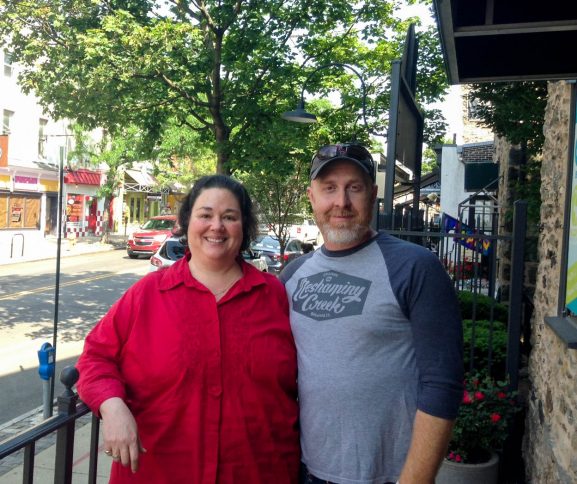 Lipton praised Barnes and his partners’ decision to open Lucky’s Last Chance as an establishment where people could enjoy and discuss quality craft beer, even before craft beer became a mainstay at many restaurants. Lipton noted that this decision was a contrast to bars in Manayunk that were more prone to attract the college crowd by offering low prices.

“(Barnes) said ‘I don’t want them twenty deep, trying to get a pitcher for five dollars,’” Lipton recalled. “He said ‘I want to sell good bottles. I want people to understand beer. I want to talk with them about beer.’ He had a vision.”

Barnes said he and his partners have always wanted Lucky’s Last Chance to be a restaurant where everyone feels welcome.

“Can we be that local place that’s casual, but you can get a great beer at? A place that’s comfortable for a 60-year-old, a 30-year-old, and a family to walk into without feeling like they need to dress up,” Barnes said. “The more interesting the crowd, the more fun it makes what we do.”

“I think one of the great things about Manayunk is that you have so many people down here that actually do that,” Barnes said. “They are active, and they are taking that pro-active approach to make Manayunk the charming, interesting, vibrant place that it is.”

Manayunk: Q&A With A Local Legend Who Turned His Life Around

After a traumatic accident, doctors told Dave Scarpello he would never walk again. The Manayunk native who has lived in the area for 32 years, proved them wrong. He ran in the Broad Street Run [Read More]

Not to be confused with the Argentinian sauce Chimichurri, the Dominican Chimichurris is an after-party must. Originating in the Dominican Republic, the Chimi is a burger-like specialty sold out of panel trucks in corners of [Read More]

Waterfront: Cooperation Is The Name Of The Game

Jacob’s Ladder, Solomon’s Seal and Shooting Star. No, these aren’t references to characters and events from the bible. Yet, as the shooting star signaled the birth of Jesus to the three wise men, so too [Read More]