The Oak Lane Community Action Association (OLCAA) has been distributing the East Oak Lane Paper to the community since the 70s but as of late, they’ve been having a difficult time with maintaining their audience.

According to OLCAA’s current president Eric Brice, their membership dues aren’t pulling in as much profit as they were when the organization was first established.

“The way we pursue funding could be improved,” said Brice. “We’re keeping our heads just above water.”

Brice believes that a part of their financial problem is due to a lack of interest from the community’s youth. According to the membership committee, the demographic for OLCAA’s participation lies within an older generation of people who’ve been a part of the neighborhood for decades.

“I’ve been involved with OLCAA for as long as I can remember; going on 20 years now,” said longtime member of OLCAA, Earlene Mitchell. “But we need to get the youth in our community involved because they are our future.”

In a study conducted by the Pew Research Center in 2014, approximately 32 percent of the American population that read daily newspapers are between the ages of 45-55 years old, while more than 50 percent of readers that are 65 or older frequent the daily news. Naturally, the decline in newspaper readership has been an ongoing trend since the arrival of more Internet-based media.

Nevertheless, OLCAA has 200 members this year and continues to work on bettering the community by hosting fundraising events like their winter gala which is known as the ‘Snow Ball’ event. They are also responsible for Oak Lane Day which brings businesses and restaurants together to educate people about OLCAA, as well as other businesses and resources within the community.

According to the committee board’s financial secretary Alvin Mitchell, last year’s Oak Lane Day generated $2,200, which doesn’t surpass the cost of hosting. As of this year, OLCAA’s membership dues are bringing in $3,750, but with printing and mailing fees reaching $3,000, the overall cost of managing the organization has yet to be fulfilled.

Aside from fundraising and receiving membership donations, OLCAA receives an activity grant from the city of Philadelphia every year which helps cover a lot of the organizations fees; however, the membership committee has realized that their grant value has been decreasing. This year, OLCAA received approximately $2,000 for their activity grants.

Disregarding their financial struggles, OLCAA’s membership committee is secure with knowing that their existing members rely on their services.

The people of the East Oak Lane community have depended on OLCAA for more than 50 years because of its direct connection with the 35th Police District. Both entities work in collaboration to inform and protect the neighborhood by distributing crime alerts to OLCAA member’s email addresses.

“The problem in our community is that people don’t think the crime stories they see on the news in other areas are actually happening in their own backyard,” said Brice. “So, not everyone feels inclined to do something about it. But that’s why we have other committees like the 35th District Town Watch – to keep people updated about what goes on in their community.”

OLCAA also offers information through a variety of smaller committees, like Safety and Town Watch, Housing and Zoning, Development, Events, Education, and Public Relations. Each of these committees are responsible for providing further assistance within their specified point of interest. 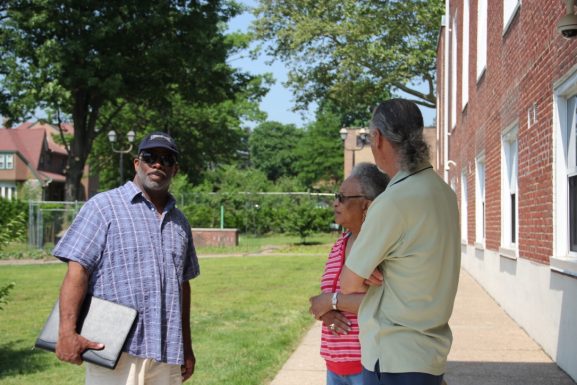 Being a multifaceted organization has helped OLCAA in many ways, but they are unfortunately still struggling to gain audience members and increase their revenue.

Smiley Ferebee has been an OLCAA member of for six years and can attest to the organization’s value and importance within the community. She’s been a board member for four years and was brought in to assist with hosting special fundraising events for OLCAA and its committees.

“It brings the community and businesses together,” said Ferebee. “They also work with other neighborhoods to help with bringing the community together as a whole.”

OLCAA meets on every second Wednesday of the month at Oak Lane Presbyterian Church on 11th Street at Oak Lane to encourage community involvement and support for local businesses and organizations. Despite their difficulty with bringing in new, substantial members, OLCAA continues to exercise new ideas and methods to harmonize the community.

-Text and images by Victoria Batista and Delialah Burns.

Manayunk: A Day with the Guitar Man

https://vimeo.com/24199322] Most people might guess that the 55-year-old man strumming a guitar on a Manayunk bench had always wanted to be a famous guitarist. But few would probably suspect that he ended up becoming the [continue reading…]

https://vimeo.com/43841138] Residents of West Rockland Street, located between the 4800 blocks of Germantown Avenue and Green Street, have been working diligently to assure that the neighborhood is safe and functions as a tightly knit unit. [continue reading…]