Christopher Munden, 39, an expat from the U.K., has worn many hats in his life. He has been everything from a ski instructor to the editor-in-chief of the independent theater and arts website Phindie.

Today, Munden is a soccer coach and the vice-president of the Kensington Soccer club, which he started in 2009 with high school teacher Jim Hardy. Together they created a soccer club that helps build leadership, teamwork and education.

Munden wants to spread the word to educate kids on the street, creating the environment where everyone respects values and success.

How did this soccer club begin and what was your role?

[Jim and I] started the club for kids in the neighborhoods, basically playing the pick-up games. Having some structure, some equipment, doing some coaching, eventually, we started to do more structured stuff set up in intramurals and now we cater to 300 kids together mostly from this area.

What was the idea behind it?

The idea came from the need of certain activities in bad areas of the city to help growing youth to stay motivated and goal-oriented verses being under the street influence. With collaborative efforts we wanted to bring the change to the community, sharing our own passion, we help kids achieve their goals.

I met Jim at an Ultimate Frisbee event, where I was wearing a new shirt with a soccer team printed on it. Knowing I was a soccer fan, he came to me with this idea. I don’t have kids of my own and I thought it was a great idea with a big win.

When you met Jim did you envision yourself doing this?

I previously worked as a ski instructor and for the Special Olympics, which was a community work. I totally like helping kids and I love soccer so it was a good melting of those two. 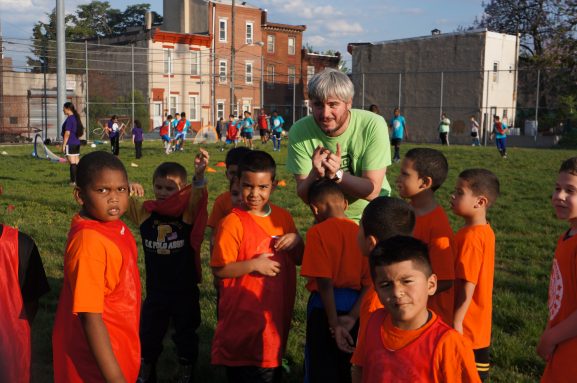 What is the aim of this organization?

It is a sports base youth development. We are using soccer as a tool for community building, for enriching youth lives. We have an educational component, like literacy readings on a sidewalk near the church for the younger kids [where] we give away books and little prizes. We have a new pilot program, where we go to one school gym class all day for several weeks to teach soccer. Also we have travel teams that compete with other teams in the city.

Anybody helps with funding and donation?

Yes, we were lucky to get support from Kensington Neighborhood Association, Philadelphia City Administration, Soccer League and individual donors.

What is your experience working with kids?

Very positive. It has been a joy like, teaching soccer in particular is the great way of reaching kids, as they are into sports and it teaches them great skills. We work both on individual skills and on leadership and teamwork. This relationship with kids feels like a family a lot, as they bring their own stories to the community. In fact all my family is involved. My sister Caroline coaches two and three-year-olds and my mom, Melanie, who is former teacher, runs the educational table on Saturday. 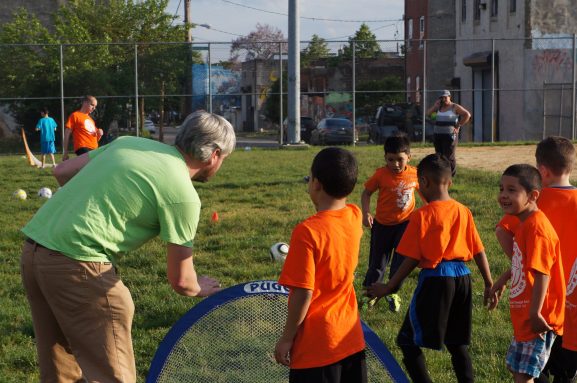 Tell us if you faced any changes in the neighborhood?

This neighborhood has definitely changed. Demographically it’s changed, there are kids coming from different areas to be a part of the club, playing soccer and learning how to be a part of outgrowing community, demonstrating leadership and teamwork. This neighborhood is a nice intersection of different Philadelphia neighborhoods, where you have North Philly, Hispanic Kensington, East Kensington, Fishtown and this is like a focal point. We have kids, who started with us in 2010, who are 10-years-old and 15 –years-old, who became leaders in our organization, which is really rewarding.

What was your most memorable moments with kids?

On the first year we did travel teams and the kids were not ready and they were playing against teams all over the city, who had a lot more experience. They didn’t win a single game. We were in the last game of the season and had six goals next to nothing and they scored the goal and they celebrated as if they just had won a championship.

Is there any child with behavior issues changed because of this program?

Justin, is not here today, he is 13 years old and has attention deficit disorder. He started with us 5-years ago in 2011, when other coaches didn’t want to work with him, because he is not easy to handle.  We set a good relationship with him giving him an equal chance to play soccer. He is a good soccer player and special kid and I think it is important to make this connection with kids, like with many adults in this life, giving them a chance to be better than they are.

-Text and images by Oksana Ponomarova and Sarai Flores.

Roofless and deconstructed, a grey building on the 1900 block of E. Letterly St. is nothing more than a pile of bricks, metal frames and shattered material. What is shown on Google Maps of 1921 [Read More]

https://vimeo.com/65098294] Habitat for Humanity ReStore, a second-hand retail outlet in Kensington, primarily donates back to the community by helping build homes. However, ReStore also gives back by giving individuals and organizations a platform for [Read More]

Kensington: The Families of Kensington Football

Family is a strange term. While it is immediately recognizable what a family is, the definition varies wildly across cultures and individuals. To some, family simply means mom, dad and siblings.To others, it includes an [Read More]