Equipped with pledge cards, iPods, and polling data, a group of five millennials cramped into a minivan.

The canvassing clan is a constituent of the National Council of La Raza’s Action Fund, a federal Latino advocacy organization aiming to mobilize the minority group’s vote through civic engagement and issue-based campaigns. For the first time, the NCLR Action Fund is initiating efforts in Philly, striving to educate and encourage Latino communities on the logics of voting, especially amid this unprecedented election cycle.

“We did find that there is quite a bit of interest in this election. In 2008, and to a lesser degree 2012, (registering to vote) came from a more hopeful and positive perspective, but with this year, it’s doing it out of fear,” said Rafael Collazo, NCLR Action Fund’s Director of National Campaigns. “The interest is similar, but it’s from a very different emotion. It’s more of a fearful emotion.” 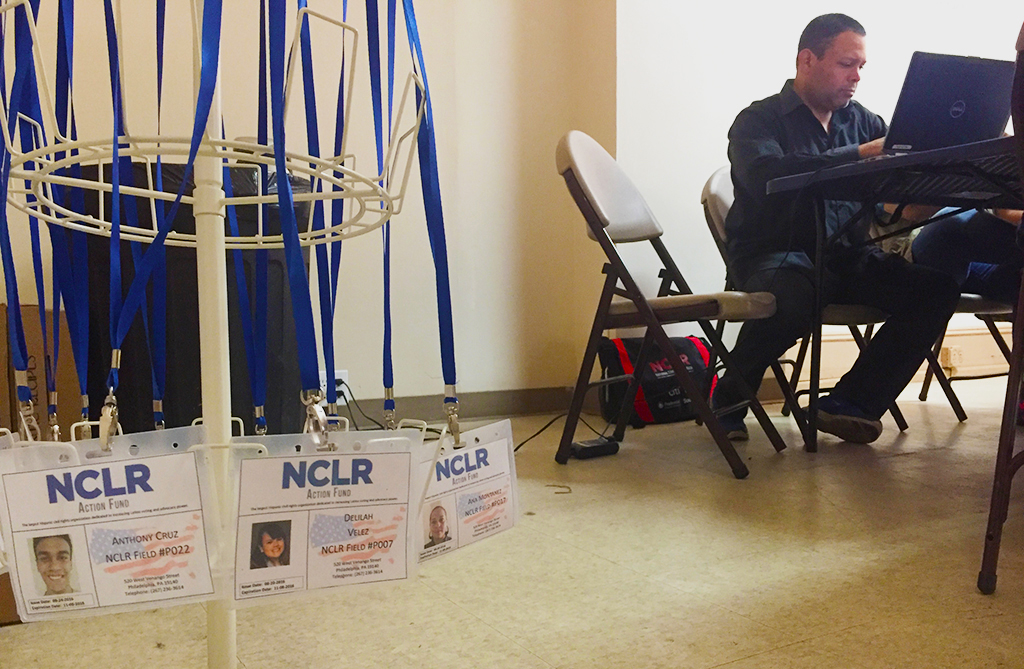 The NCLR Action Fund, whose office is located in an annex of the Asociación Puertorriqueños en Marcha (APM) organization on 520 West Venango St., kicked off its electoral efforts in August, detecting the various voting statuses of community members, including residents of Hunting, Juniata Park, and Feltonville. After detecting unregistered/registered and frequent/infrequent voters, the organization began cultivating its campaign.

In true campaigning form, the team unearthed issues that mattered most to community members as a leverage to illuminate their views on the voting process.

“A lot of campaigning is with social media, emails, text messages, stuff like that, but, to get the message across, it’s very important to make that face-to-face communication,” said Monica Parrilla, organizer of the Philly-based NCLR Action Fund. “And to get someone out to vote, especially the Latino vote, for people who aren’t registered or don’t know what’s going you have to have that communication piece. It’s not just about Facebooking. You have to have a relationship with that person at the door.”

Since the summer, Parrilla has recruited 15 people between the ages of  18 and 27 to serve on her canvassing squad – 90% of whom are Spanish speaking, as language barriers are possibly the most paramount piece of the communication procedure.

Along with NCLR Action Fund, some associated groups are also tackling the dubiety broken-English speakers could face at the actual polls.

Ceiba, a coalition of Latino community-based organizations, is coordinating telephonic and in-person interpretations on Election Day.

“One of the things we’ve been working on is ensuring that the rights of voters, who are limited English-proficient, are aware that they have the right in Philadelphia to interpretation services at the polls,” said Will Gonzalez, executive director of Ceiba.

Aside from communicating bilingually, the NCLR Action Fund canvassers collect and store information and incidents that arise on their beats into iPods with a communal app, so every member of the organization has access to the findings.

Throughout their expeditions since August, the team found a recurring theme of issues expressed by a spectrum of people, from lifelong locals to inhabitants who immigrated from Puerto Rico just six months ago.

Of the nearly 5,000 individuals they’ve encountered throughout the 7th ward, including Hunting Park, Juniata Park, and Feltonville, roughly 75% of residents have voiced a scope of concerns related to health care, crime/safety, and economic issues, like minimum wage and unemployment. On a more regional level, the issues included potholes and abandoned homes.

While the NCLR Action Fund figures out the community’s concerns, it also faces obstacles of its own. A controversy that once mostly tainted elections in southern states has now seeped into Pennsylvania.

“We’re getting these reports all over the country of these underground campaigns that are going into minority urban communities to make people nervous to depress the voter turnout in these areas,” Collazo said. 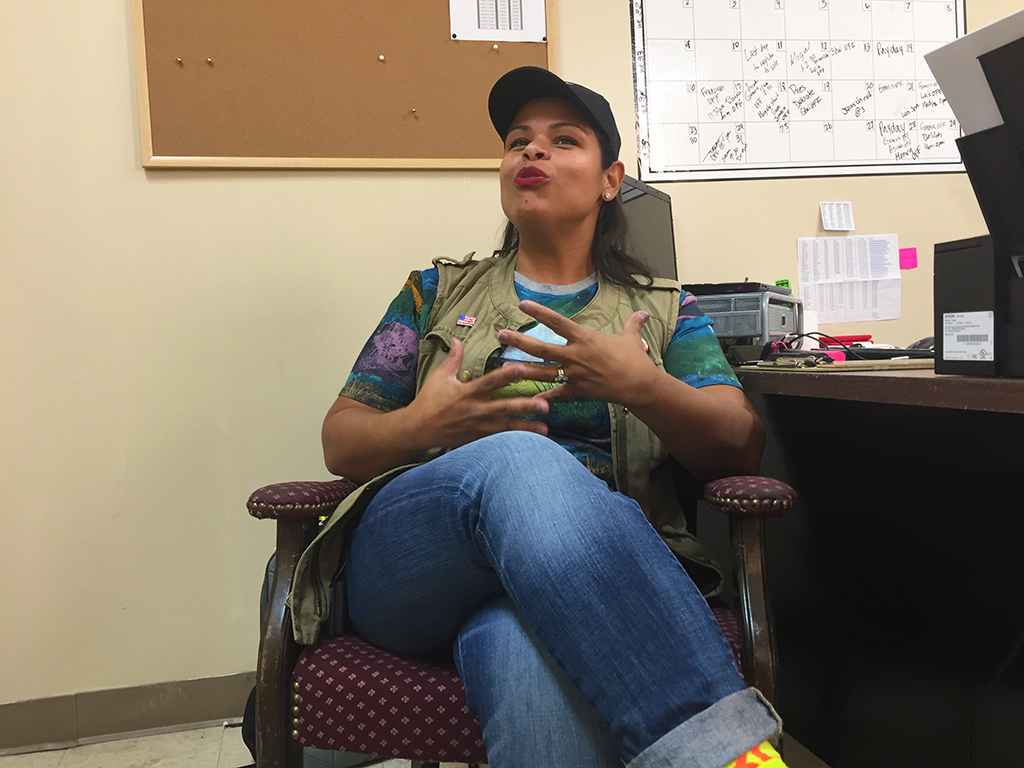 These “intimidation campaigns,” as described by Collazo, have been filtering into North Philadelphia neighborhoods, countering the efforts of the NCLR Action Fund.  Sometimes posed as reporters, they knock on doors and ask residents dubious questions regarding Election Day, such as what time he or she will be going to the polls, according to canvassers.

According to Colazzo, this issue has been reported mostly during primaries and local elections in the local area, but for the first time, it’s affecting the presidential election here, especially considering Pennsylvania is home to half of a million more registered Democrats than Republicans.

“The Republican candidate made it very clear that he (Donald Trump) believes there is voter fraud in minority communities,” Collazo said. “He’s encouraged his supporters to go to the inner cities to keep an eye on us, so this is an extension of that whether his campaign is directly funding it or other people are being inspired by it.” 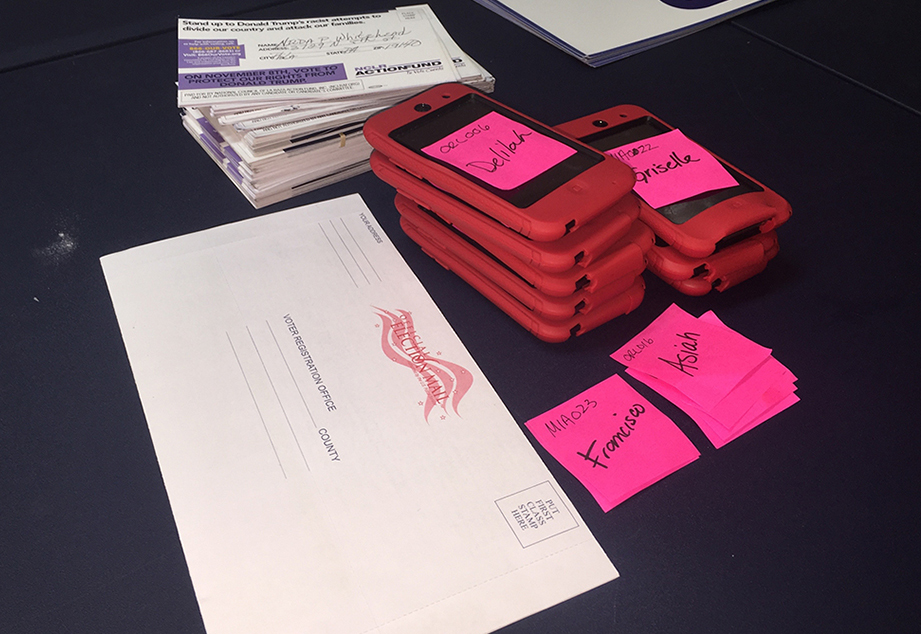 These terrorizing groups can contribute to Latinos’ preexisting hesitancy to vote, as the demographic’s voter turnout tends to be around 10% less than the national average, according to the Pew Research Center, as 2008, the national turnout was 62.3%, while the Latino was 49.9%.

For the NCLR Action Fund, a challenging mission is reassuring the minority that their vote does indeed count, particularly in this year’s epoch-making tight race in a swing state like Pennsylvania.

“It’s empowering that I’m helping and educating people to come out and vote…,” Parilla said. “Year ago, minorities had to fight tooth and nail to have this right, and it’s important that they use it…they have a voice.”

–Texts, images, and video by Grace Maiorano and Ashley Portillo

Despite the many positive changes happening in Hunting Park, community outreach proves to be a recurring issue in the neighborhood. Despite the many different organizations created to better the area, not everyone is aware of [Read More]

https://vimeo.com/30060883] Education has been hit hard over the past year. Particularly here in Philadelphia with the recent budget cuts for education it’s been hard for public schools to maintain after-school programming. But with the help [Read More]

Hunting Park: Ryan Harris Helps Youths to Think, Grow Outside of the Box

When you leave the neighborhood you grew up in, it can be easy to simply move on from the troubles you faced there. Many want to escape their, perhaps, troublesome pasts and move on toward [Read More]