After the shooting of Trayvon Martin and the acquittal of his shooter George Zimmerman, the Black Lives Matter movement exploded onto every television screen, Twitter feed, and the minds of activists who wish to better the lives of African-Americans.

Organizations like the International Action Center (IAC) in Philadelphia and Philly Thrive focus on ensuring that black lives really do matter, and they will stop at nothing to make that known.

The IAC was founded in 1992 by Ramsey Clark and is currently headquartered in New York City. The organization is anti-capitalist, and therefore receives no funding from big business, but rather funds itself internally through its thousands of members.

Mattie Boyd (above), 26, has been with the IAC for about two years and is part of a team of 15 people who fight for social justice in the Philadelphia chapter, which is one of almost 20 chapters nationwide. 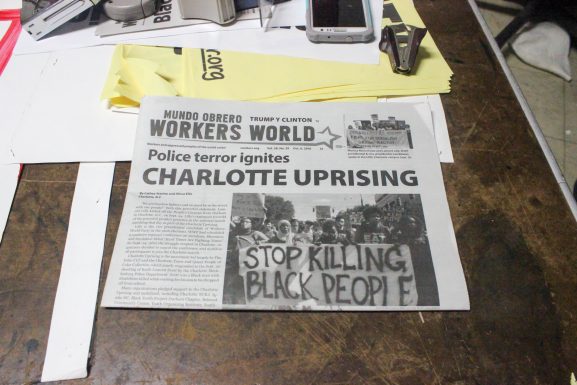 Recently, the IAC has been involved in a fight to remove the infamous statue of Frank Rizzo from out front of the Municipal Services Building in Center City. This has included public protests, sit-ins on city council meetings concerning the statue, as well as helping to create the Frank Rizzo Down Campaign.

“It is such an offensive symbol to people of color and progressives, and has emerged as this receptacle of all of this justified hatred for the oppressors,” Boyd said. “But, it’s not just symbols we need to go after; it’s also institutions like cops, politicians, and the military.”

Betsey Piette (below) is one of the founding members of the Philadelphia chapter of the IAC, and has led numerous protests against the statue. She has been fighting the actions and ideologies of Frank Rizzo since 1978. 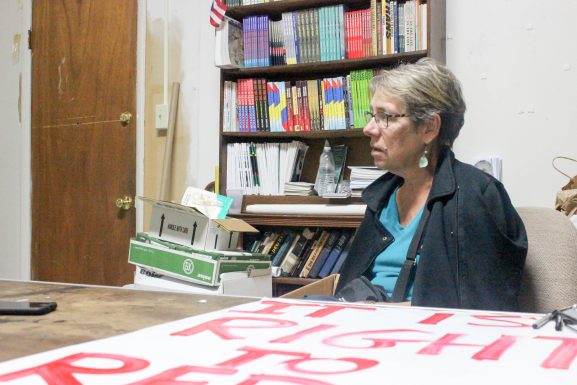 “In a public thoroughfare, a statue like this is highly offensive,” Piette said. “That means that it must be a target for our coalition.”

In addition to the IAC, organizations such as the Philly Coalition for REAL Justice have also been fighting to take down the statue.

“When we join together with similar organizations like ours, it really leaves a mark,” Piette said.

While the IAC fights to remove the statue of Rizzo from the public view, organizations like Philly Thrive have been protesting the building of the PES refinery in Southwest Philadelphia, seeing it as a heavy contributor to the displacement of low income and African-American people in the area. Lawrence Miller has been a key member of the organization’s Right to Breathe Campaign.

The Right to Breathe Campaign’s main goal is to expose the fact that oil companies such as PES in Philadelphia are polluting strictly low-income areas of color.

“The expansion of the oil and gas industry as dense as Philadelphia will disproportionately affect these communities,” Miller said. “This is not only a public health issue but a racial and economic justice issue.”

Although some believe the causes of these organizations seem almost futile, those involved are optimistic for the future. For Piette, nothing is impossible.

“Having a presence when something needs to be spoken about, even if it’s only two people, you can have an influence. Keep fighting.”