Right now, at the corner of Henry Avenue and Maris Street, there sits an empty lot. But because of the by-right development, a new apartment building is in the works. Thanks to by-right, and much to the dismay of the neighbors, the ROCK Construction and Development corporation was able buy the piece of land at 5938 Henry Ave. and start development without any hearings, as long as their building is up to code.

Pounds is the Republican candidate for Pennsylvania State Representative in the 194th District, running against incumbent Pamela Delissio. According to Pounds, the building is proposed to be 50 feet tall, have 36 units, but only 21 parking spaces. As a resident of Manayunk, Pounds understands the struggle of not being able to find parking.

“I came home the other night at seven o’clock,” he said.  “I had to park seven blocks away from my house. I know that that’s happening to everyone around here. This has been plaguing this district for the last ten years and if we don’t get our arms around it right now, this is going to turn into a transit community. You’re going to get people who are in here for one or two years and then they’re out.”

Pounds can speak from experience. Before graduating from Temple University in 2007, he spent some of his upper-class years living in Manayunk. When he first moved in, Pounds thought he and his fellow college students in the area were only going to help the community. But since graduating he has realized how off base he was.

Apartment buildings like the one set to be built on Henry Avenue create temporary residents, people who stay for a few years and then leave, without getting involved in the community.

This problem is nothing new. In fact, it is the very definition of what a college student is. But, much like the development (see: gentrification) around schools like Temple, Drexel and the University of Pennsylvania, the overdevelopment in neighborhoods around the city are upsetting long-time residents. 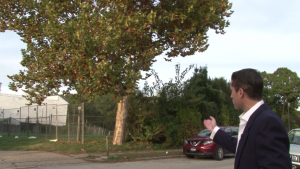 Jenifer Maloney is a long time Roxborough resident. Her home is on Maris Street, right by the lot in question. She is unhappy with the thought of a new apartment building right by her house, and the possibility of it bringing up to 70 new cars along with it.

Maloney’s neighbor, Joann McCauley, also worries about how the 50-foot tall modern building with fit in with their stone and brick houses.

“Our hands are tied,” McCauley said. “It’s a done deal from what we were told. We’re realists. We know it’s going to be developed. But, maybe if [ROCK Construction] can work with us, that would be great.”

Councilman Curtis Jones is in charge of the 4th district, which includes Roxborough. He has noticed attempts to build apartments similar the the one on Henry Avenue all throughout his district. Jones says he is very cautious about any development that would take away from that open space and quality of life.

“We had a showdown with a developer,” Jones said. “He wanted to build maybe a dozen homes on Germany Hill. We had a fight, went to court. They tried to get me to allow it and I would not. There are some places in my district that I would be overjoyed to have the attention that would add economic support to the area.”

Although issues like this would not fall under Pounds’ jurisdiction if he were to win the State Representative election, he is still making it his business to help out.

“This is what’s important to people,” he said. “It’s something that needs to be tackled. People aren’t passionate about the budget right now. People are passionate about what is affecting them directly, and this is a prime example of that. That’s why we’re tackling it head on. We’ve got a leg up here because we’re able to get involved before they actually break ground and construction starts.”

Pounds’ goal is to start a petition and get the community to rally around it, and hopefully get it up to 10,000 signatures. He also wants to get rid of by-right development and add more transparency in future development of the area.

–Text, images and photos by Veronica DeKett and Patrick Johnstone.

Roxborough: How The Schuylkill Nature Center has Adapted to Social Distancing

As COVID-19 continues to affect operations, The Schuylkill Nature Center in Roxborough has found ways to offer camps and programming in a safe way. [continue reading…]

Manayunk: A Grassroots Gathering for a Good Cause

Destination Schuylkill Project hosted “Hang Out to Help Out,” a green gathering at the Bourbon Blue in Manayunk on Feb. 5, to garner support and funding for its upcoming projects. The group, which facilitates maintenance [continue reading…]