Spice House Sound opened its doors in Fishtown two years ago, and has been quietly building itself since then.

A studio partially owned by Alex Santilli with the intention of providing high quality services, Spice House has worked with a large variety of artists.

“Even in rock there’s a huge variety of different-sounding rock records, from extremely distorted and heavy sounding to very light,” Santilli said. “And I think that I know the sound enough that I can do what’s appropriate for the genre.”

The list of those who have entrusted Spice House with their artistic vision includes musicians ranging from rapper Meek Mill to punk group Pissed Jeans to smaller, more local bands. Currently, Spice House’s website lists 67 clients they have worked with, across the spectrum in terms of genre and size.

Cape Wrath recorded at Spice House and says that the current state of their band came to be because of the environment fostered at the studio. 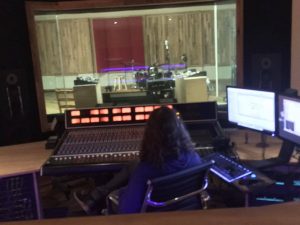 “Our experience at Spice House was unique in that our band started as a solo project and morphed into a collective, and this process can be directly attributed to the familial, collaborative atmosphere Spice House embodies,” said keyboardist Jamie Glisson. “It was the most integral experience we’ve had as a band to date.”

Besides its affordable rates, Spice House draws a number of artists through its doors because of the sound equipment.

Santilli, who has worked on electronics since he was a teenager, has designed or redesigned many pieces of the studio’s equipment. One such piece is the speakers that he has just installed in the studio.

“I work on a lot of different projects and equipment projects,” Santilli said. “I think that they’ll be the best speakers you’ve ever heard.”

Santilli said he may try to market the speakers down the line, but currently his interests lay in recording.

This knowledge in building and repairing sound equipment has allowed him to develop things in the studio to sound the way he wants them to.

“The control room’s built around the speakers I’ve designed and the live room’s designed for the maximum huge sound,” Santilli said. 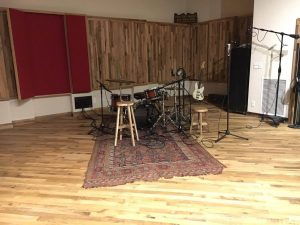 Technology across the board has developed rapidly over time. Recording technology is no different. Programs that can be downloaded from home including Logic and GarageBand allow artists to record demos themselves. Instead of seeing this as a challenge, Santilli sees this as an advantage in the recording process.

He sees many artists come in now with fleshed out compositions that need to be recorded to sound better, compared to a time before these programs existed when artists often needed more work arranging the final compositions.

“It might not sound great, but at least you know if the arrangements are working, if the strong structure’s working,” he says. “You just get the feeling.”

Recently, artists like Flyermile — a band including nationally known Doylestown rock group Circa Survive’s drummer Steve Clifford — and Vita and the Woolf have recorded at Spice House. Though these recordings could increase Spice House’s popularity, there’s no rush on the studio’s end.

Though he feels the studio will continue to grow, Santilli says he is happy with Spice House now too.

“I’m tremendously happy where I am and if it stays like this for the rest of my life, I’ll be very happy,” Santilli said.

– Text and images by Vince Bellino

If last year is anything to go by, then 2016 is set to be a year full of disruption for commuters in Philadelphia, even without a visit from the Pope. And with 30 projects underway […]

Filth and trash have become an increasing concern as the Fishtown population has grown in recent years. The answer to this issue is the Beautification Committee, a sector of the Fishtown Neighbors Association (FNA), whose […]

https://vimeo.com/50039305] In an effort to expose more local children to the arts, the Salvation Army Ray & Joan Kroc Center joined forces with the New York Staff Band and Carol Jantsch of the Philadelphia Orchestra […]