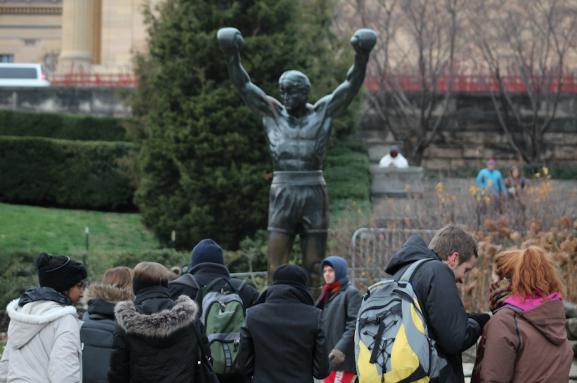 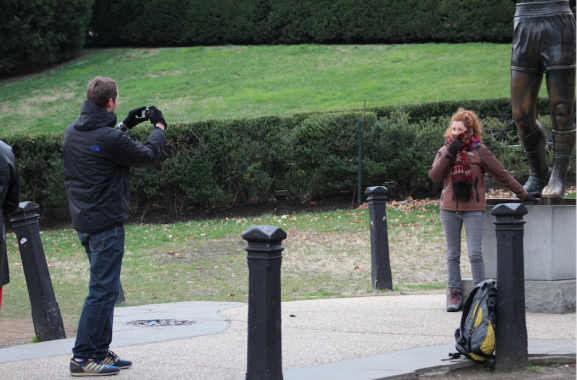 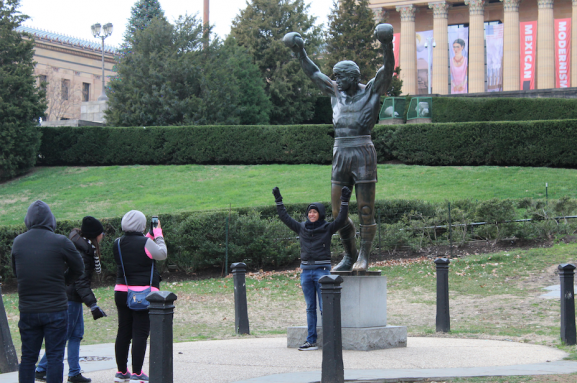 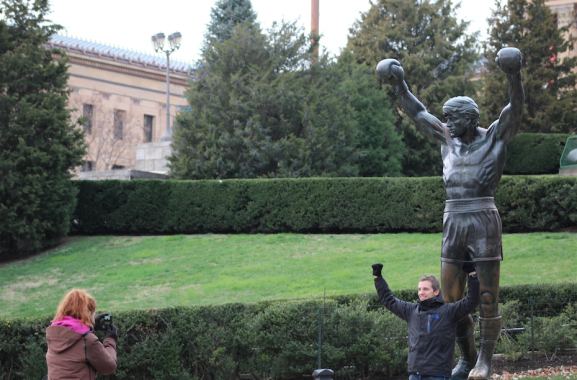 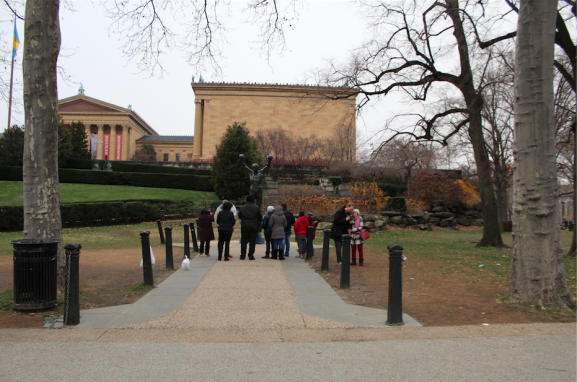 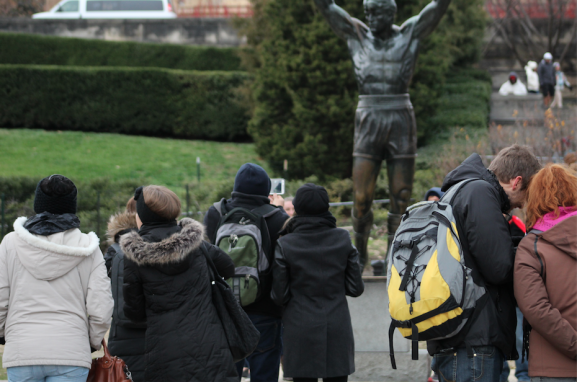 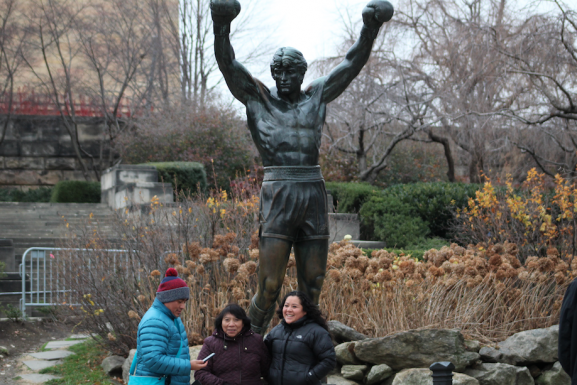 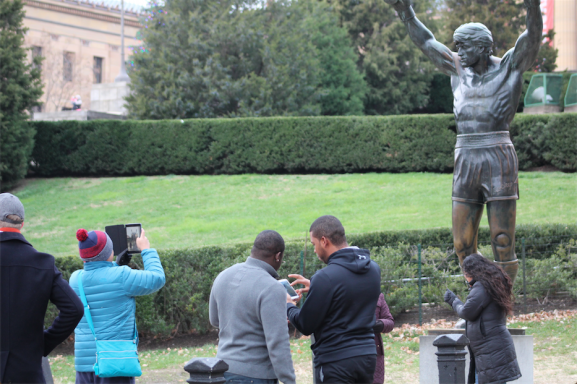 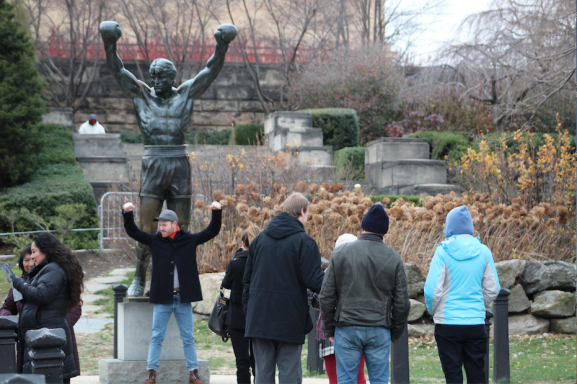 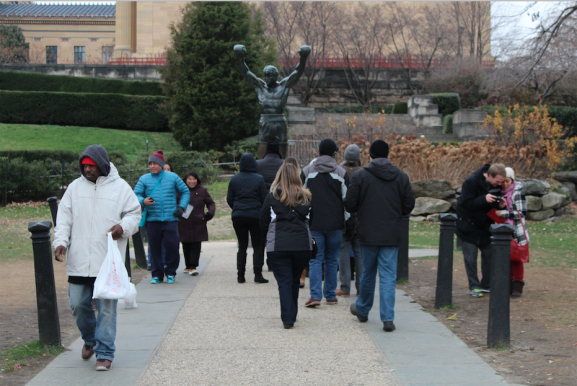 A day in the life of Rocky: Tourists pose at Rocky Balboa statue, a major tourist landmark.

Mick Houston, owner of Fairmount restaurant Jack’s Firehouse, believes that tourism is beneficial for his business and also the community.

“Tourism is a growing staple of the area,” Houston said. “We have always had the art museum but Eastern State has exploded in the past few years. Around 2002, they opened it up year-round for the first time, and it brought more and more people to the area. Then the buses started traveling here on a regular basis and it brought a lot of tourism to the area.”

Houston believes Fairmount is popular not only for its major tourist attractions but also for the sense of community it brings for visitors who step outside of Center City.

“What a great area, what a great environment where there is vibrancy of families, which is something you don’t get in a lot of cities,” Houston explained. 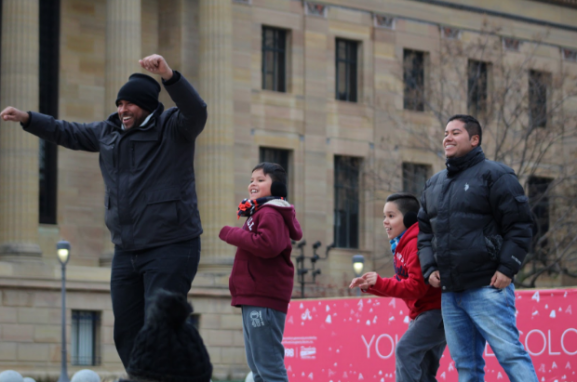 Another restaurant owner in Fairmount Brian Sirhal, co-owner of La Calaca Feliz, opened his restaurant in Fairmount because he believes it is an ideal location to operate a business.

“It’s a great neighborhood. We like the location near the art museum and it’s close to Eastern State Penitentiary, which gets a lot of tourist activity and it’s an easy area to get into from outside of the city,” Sirhal said.

Sirhal explained how his business experiences the benefits of tourism in stages throughout the year depending on the seasons or what holidays are approaching.

“Eastern State Penitentiary has a huge increase in business around Halloween time,” Sirhal said.  “Terror Behind the Walls is a great tourist attraction and we see a great spike in our dinner business.”

Terror Behind the Walls is a haunted attraction that Eastern State Penitentiary opens up every year starting in September and running through November. Many restaurants, including La Calaca Feliz and Jack’s Firehouse, promote their businesses by selling tickets that come with certain dinner packages, called fright and a BITE.

Sirhal also explained that other events bring tourists to Fairmount year round such as special exhibits at the art museum.

“Whatever it is going on, we’ll see a nice pop whether it be for brunch or before and after the events,” Sirhal said. “It’s been a great relationship with the area and having these institutions close by.” 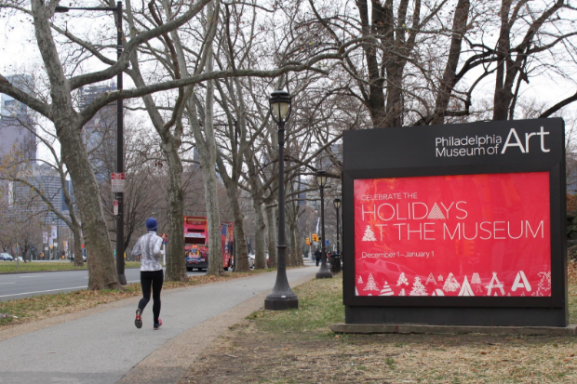 Another business in the restaurant industry that is greatly affected by tourism in Philadelphia is Ry Bread. Unlike other sit-down restaurants in the area, this cafe’s goal is to get people in and out of their shop as efficiently as possible, which is appealing for fast-paced tourists.

“This is a to-go shop and people appreciate how fast they can get a breakfast sandwich here,” Karen Linton, manager of Ry Bread, said. “Our aim is to serve as many people as we can as quickly as we can.”

For Ry Bread, tourism plays a large role in the business’s major rushes.

“On the weekends we just get a flood of new people which is awesome, and the food is new for them which is really exciting,” Linton said.

Linton takes pride in attracting tourists to her restaurant and believes that Fairmount would not be the same without them.

“I think we love tourists because this is a restaurant industry, so we need them to have a great day of sales,” Linton said.

Visit Philly’s annual report explained how most of the money that tourists spend in Philadelphia goes toward food, beverage and lodging, which explains why restaurant owners and managers enjoy the flood of tourists who visit Fairmount.

“Having all these people is a huge benefit to all the restaurants,” Sirhal said. 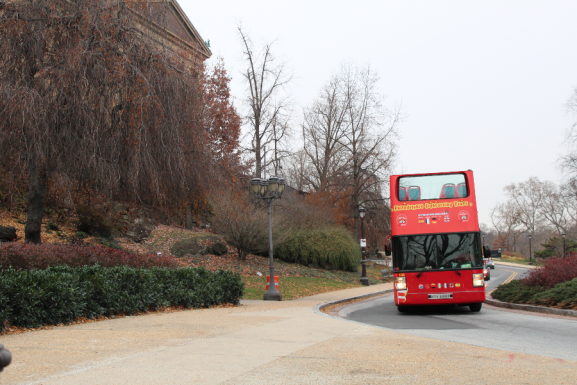 In addition to working in the restaurant business, both Linton and Houston serve as community members of Fairmount. The two appreciate when tourists visit from a resident’s perspective as well.

Linton, who lived in Fairmount for five years, believes that despite the influx of people that tourism brings to the area of Fairmount, tourists are overall beneficial.

Houston currently resides in Fairmount and has lived in the area for the past 19 years. Tourism is good, he said, but not always perfect.

“Are there people who do knucklehead things?” he said. “Yes, but this is a city so everyone is going to run into a few knuckleheads. But the tourists are our guests, so we’re going to take care of them and make sure they have fun.”

–Text, images, and video by Samara Grossel and Kristi Fidler

After decades of promoting the city of Philadelphia to both tourists and locals, Meryl Levitz says the time has come to retire as CEO of Visit Philadelphia, the tourism booster she founded in the ’90s. [continue reading…]