In August, the group formally known as Newbold Neighbors Association took a leap in creating inclusivity in the Point Breeze community.

The civic association that serves the area between 18th and Broad Streets and Washington and Passyunk Avenues chose to rename their organization to the East Point Breeze Neighbors (EPBN), to acknowledge the history of the neighborhood and controversy in rebranding parts of it.

“I want to see everyone at the table, and that’s not really happening right now,” said President Miguel Garces.

Charlie Ellison, chair of the EPBN Public Safety Committee said the nickname for the southernmost part of Point Breeze was created in a for-profit revitalization movement led by developer, John Longacre, circa 2008.

“I don’t think anyone in the East Point Breeze Neighbor’s service area really identifies with the name Newbold,” Ellison said.

When the Registered Community Organization (RCO) was created eight years ago, Ellison doesn’t think anyone on the board foresaw the contention which was created among long-term and lifelong residents of the community. 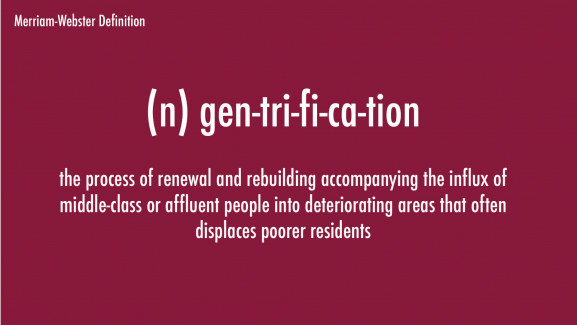 “It implies a change in the fabric of the community,” Ellison said.

He noted the outcome appears synonymous with pushing out long-standing neighborhood residents.

“Gentrification is an issue and an opportunity,” Ellison said. “We shouldn’t build over a community’s history just to make it grow.”

Monthly general body meetings are held by EPBN to engage with their members and hear local zoning proposals. On the rainy evening of Nov. 30, Garces, added the Neighbors Investing in Child’s Education (NICE) to the bill.

NICE pitched their bid to a group of about fifteen neighborhood residents. The non-profit seeks to build two new play spaces for the neighborhood community school, ensuring all neighborhood children have enough resources for play.

“Young people tend to be more transient,” Garces said. “Some people move in, have a baby and move out. NICE [supporters] are people that are trying to do the exact opposite.”

Kim Davis has lived through it.

A lifelong resident of Point Breeze, Davis put all but one of her children through Childs Elementary and uses her role as a community activist and a parent to support NICE.

Her work within the community to develop youth opportunities aims to create a cultural reinvestment in her neighborhood, which has seen radical demographic changes in the 46 years she has lived on 15th and Latona Streets.

“I moved to this house when it was a majority white neighborhood,” Davis said. “Then the neighborhood changed and it became an African American majority. And now you have a little bit of everything.”

Ellison echoes the sentiment. He says on his block alone, neighbors speak a combined seven different languages. According to the U.S. Census, from 2000-2014 the foreign born population increased 72.5 percent.

Mary Bell moved to Philadelphia from South Carolina as a young woman. Settling in on the 1700 block of Latona Street, she hasn’t moved since. Raising a family in the neighborhood inspired Ms. Bell to become an educator; most of her children attended St. Rita’s Parish School, inspiring her to teach at the archdiocese.

Development in Point Breeze over the last ten years has gone skyward. The median home price has risen 184 percent, while the median income in the neighborhood has only risen 27 percent, according to the Philadelphia Coalition for Affordable Communities 2015 Report.

A historically underfunded area, Point Breeze was rated by the city’s Home Owner’s Loan Corporation in 1937 with the lowest neighborhood security ranking owing to a “detrimental negro enroachment” as well as an “infiltration of Italians.”

Point Breeze has traditionally attracted low-income families from culturally diverse backgrounds who would have otherwise been unable to invest in a home. Banks and lenders were long unwilling to approve mortgages to African Americans families, who as victims of prejudice were thought to be at high-risk for mortgage defaults.

House ownership is a major step to wealth acquisition through building equity. This discriminatory practice allowed for continuing racial disparities in homeownership and wealth gain for people of color living in the inner city.

The Fair Housing Act of 1968 made change, rejecting long-accepted prejudice in housing based on color, creed, and gender. Passed as Title VIII of the 1968 Civil Rights Act, the protection came long after Point Breeze was slated as a casualty of historical redlining. 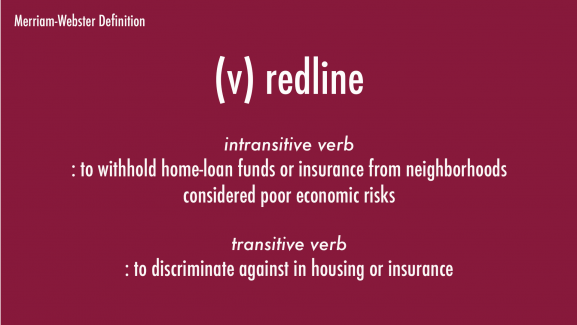 In this process, residents were denied loan applications for housing in specific neighborhoods until applicants were relegated to concentrated “hazardous” urban areas designated for “undesirables,” most often referring to Jews or African Americans, according to University of Pennsylvania Associate Professor Amy Hiller.

It also in effect created the Black ghetto, which unlike the Jewish and ethnic Italian, Irish, and Polish ghettos of the late nineteenth and early twentieth centuries remains an existing fixture of urban housing.

To this day, the effects are prevalent in the neighborhood. 22 percent of residents living in the 19146 zip code live under the poverty line. 33 percent of people receive public assistance benefits.

In the past five years alone, the median sale price of homes in Point Breeze has risen $137,250, according to housing market analytics at Trulia.com. The median rent comes in at $1,375/month. 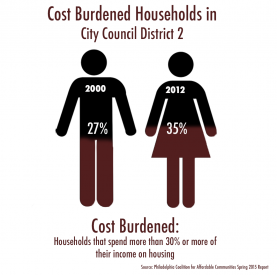 “This tired saying that Philadelphia is a city of neighborhoods is totally true,” Garces said. People really love the neighborhood block feel. We have a lot of transplants from New York that wanted to move to Philadelphia, and from around the country.”

Garces says his neighbors often come for job opportunities, and discover the classic South Philadelphia community pride is what makes them stay.

“I was looking for a new spot to land in Philly, and it’s a really diverse, open and welcoming neighborhood.” Basedow said, citing the Point Breeze neighborhood’s proximity to Center City as appealing.

“Just in terms of development options and price points, this was an option for me for a few different reasons,” Basedow said. “Part of it is that its development which offers diversity. For me, I fly a lot and it’s close proximity to the airport. There’s nothing that you’re too far from.”

Libby Peters moved to the 1300 Block of S. Chadwick Street in April after spending her years after college just a few blocks further north.

“I love the history of South Philadelphia,” Peters said.  “I think it’s a very authentic part of the city.”

The acceptance she feels in the neighborhood has encouraged Peters’ interest in joining the board of the East Point Breeze Neighbors to get more involved. She currently has an application in for the position of treasurer.

“Our block is very close and there’s a bunch of great neighborhood organizations like this one. It’s a very diverse and engaged community,” Peters said.

Opinions on the causes and effects of redevelopment in Point Breeze vary among neighborhood residents. On Saturday, Dec. 4, members of the congregation of the Mt. Zion Pentecostal church expressed their concerns with the changing face of the neighborhood.

Click on the videos below to hear long-term Point Breeze residents from the Zion AME Church at 21st and Tasker Streets speak about the neighborhood’s rapid development in the past ten years.

The Philadelphia Coalition for Affordable Communities works in underserved neighborhoods throughout the city experiencing gentrification. Based in North Philadelphia, the Women’s Revitalization Project is spearheading the organization’s first Point Breeze-based project by building an affordable housing development on Taylor and Capital Streets.

“People are getting pushed out,” said Lichtash. “It’s mostly people of color who are working class and poor.”

According to the coalition’s most recent report, African American populations living in the South Philadelphia area have decreased by 29 percent in just 12 years.

The swift increase in property taxes has financially destabilized many lifelong residents, while empowering new residents to move into the neighborhood. Further, the introduction of market-rate housing to Point Breeze, and the new residents who can afford it, has changed the neighborhood significantly in the last ten years.

New shops, restaurants, and other agents of business catering to the influx of young, white residents have started creeping up the Avenue, prompting pushback from the tenured community.

“Living capital, that’s what developers do,” Lichtash said. “Non-profit developers that care about affordability do it a bit differently,”

But it’s not just the non-profit developers making a difference in Point Breeze.

Sean Schellenger started his real estate firm Streamline Solutions only after losing all his savings in his first property investment on the 1800 block of Manton Street.

Schellenger, whose firm now owns properties across the city, doesn’t view real estate as just “dollars and cents”. Instead, he looks to see the human impact of his development.

“It really comes down to the developer and whether or not they care about the community they work in,” Schellenger said.

Helping Hands works to create educational and job opportunities in neighborhoods that are being gentrified. Schellenger says the balance of profit and people is achievable; one only has to seek it out.

“There’s a right way to revitalize a neighborhood to create a win for all the stakeholders, the people who live in the community, new residents, developers, and the city,” Schellenger said during a tour of his properties in Point Breeze. “I think there’s a way to make everybody happy.”

Schellenger’s current endeavor is the construction of a community computer lab slated to fill an empty building on 24th and Federal Streets. The lab will become the new headquarters for Helping Hands, and also host after-school programs for neighborhood kids.

The ongoing project has followed in the spirit of Schellenger’s mission by hiring individuals from the neighborhood to work on the construction projects.

“If I’m going to Point Breeze or Kensington, the people in the neighborhood should have an opportunity to get those jobs,” Schellenger said.

Garces echoed the necessity of keeping lifelong residents as stakeholders in new development.

“We support smart development that is consensus driven,” Garces said. “We want to make sure we’re keeping the developers in check, especially [so] they’re not causing problems for neighbors.”

While nobody contests that Point Breeze is changing, conflicting opinions on how to best rebuild the neighborhood have created an unavoidable divide between those fighting to keep it affordable for life-long residents and those seeking to make it a destination for young city-dwellers.

The future of the Breeze will be heavily determined by those with a vested interest in the development of new properties. But it has always been the residents of Point Breeze that distinguish it as a neighborhood, grounding it in community values that abide through generations.

“I think all of the issues about development in the neighborhood disappear when you’re on the block level,” Garces said. “When you’re trying to clean up trash and plant a tree and just do stuff with your neighbors and get involved in what your community is doing. At that low level, it doesn’t even matter actually the development, it’s more personal.”

-Text, images and video by Maggie Andresen and Brianna Spause.

[vimeo 72590992] The historic scarcity of work opportunities, resultant chronic high unemployment coupled with apartheid-era laws sparked an entrepreneurial spirit among many South Africans as a means of survival. Today, within townships such as Alexandra and [continue reading…]

Kensington: The Economics of a Fractured Community

Longtime Kensington resident and self-described activist Jamie Moffett, 36, is working alongside fellow residents to use homeownership as a way to revitalize the neighborhood. Moffett’s initiative, Kensington Renewal, works to rehab blighted houses and turn [continue reading…]