About 20 years ago, Rich Boris’ life took a turn to the past.

Boris started working as a security guard at a shop on Main Street in Roxborough after retiring from the Philadelphia Fire Department. The shop called Two by Four sold old-fashioned appliances. Boris noticed that many people purchased these items and began to ponder over the value they saw in them.

“I started buying a few little things and using them at the house,” Boris said having realized the potential of these items beyond their withered state. “I started realizing that a lot of these things could be fixed up and made to last a lot longer time. So, I actually started repairing a lot of them, the blenders and the mixers and all.”

This is when Boris decided that he had a discovered a passion for the artifacts of decades past.

The widespread use of the internet coupled with the emergence of a growing nationwide sub-culture of vintage-lovers made it simple for Boris to explore the world of old.

“eBay made it easier to find things you couldn’t normally find just going out,” Boris said. 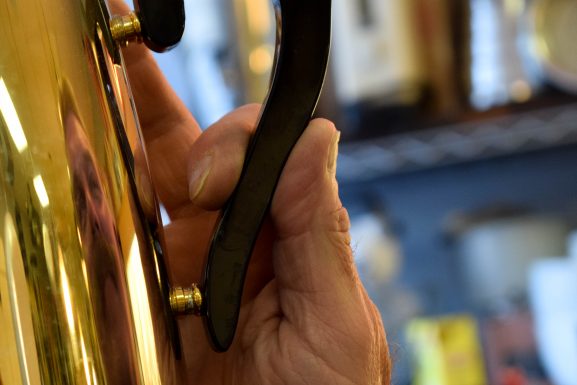 Boris decided to open Kitch-n Collectibles after years of collecting as a hobby. His first location was confined to a small space within a consignment shop.

“People were coming through her space to come to mine,” Boris said.

The owner did not take too well to the competition so she tripled his rent, forcing Boris to relocate his shop. Boris had been open 2 or 3 years at that point and initially just wanted to move to a new location to get rid of all the items he had acquired.

He moved to his own location on Ridge Avenue in Roxborough and now has a store full of vintage items. 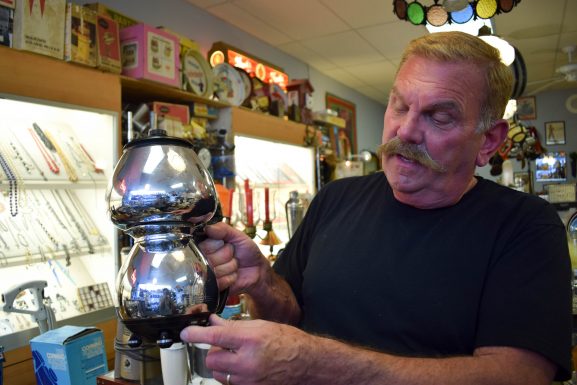 Boris’ romantic partner, Keith Horr, is heavily involved with the store and agrees that Boris does hoard.

“When he opened, I had this vision of little displays of ’40s, ’50s, and ’60s life that I wanted to create,” Horr said. “Because of the amount of inventory that we have, and the size of the store, that idea kind of flew out the window.”

Horr does not mind that too much, however he said their rule is Boris cannot bring any of the stuff home.

“That rule allows the customers to have more selection to rummage through, while also keeping me from enabling a hoarder,” Horr said.

Many of the store’s customers are regulars. Judith Tupitza has been shopping at Kitch-n Collectibles for almost 3 years.

“A toaster and a coffee maker, I use that every single day,” said Tupitza. “I also have a few things I bought that I use as planters.”

Tupitza visits the store for more than just to purchase.

“I just love to browse around the shop,” said Tupitza. “It brings back a lot of memories from growing up.” 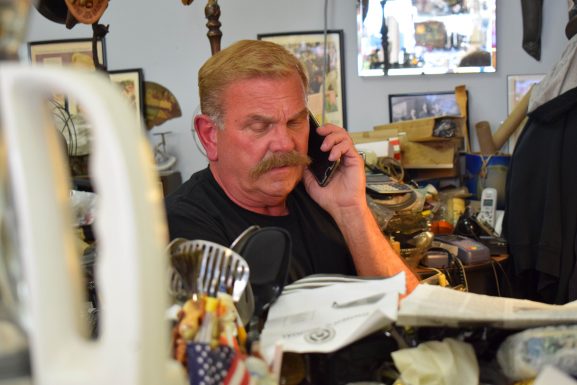 Tupitza, like many other customers, has forged a personal relationship with Boris as well. She said that Boris is always there to solve any problems with any merchandise and if he can’t, he’ll exchange it.

Boris can be credited with reintroducing quality appliances of a foregone era back into the homes of his customers.

“Before I went to his store I would get toasters and stuff from places like Kohl’s,” Tupitza said. “But the quality of this stuff is much better. The new stuff couldn’t hold a candle to it.”

Tupitza is not the only one who know about the value of antique housewares.

“The store is pretty unique – we have people who come from other parts of the United States just to come to our store,” Horr said. 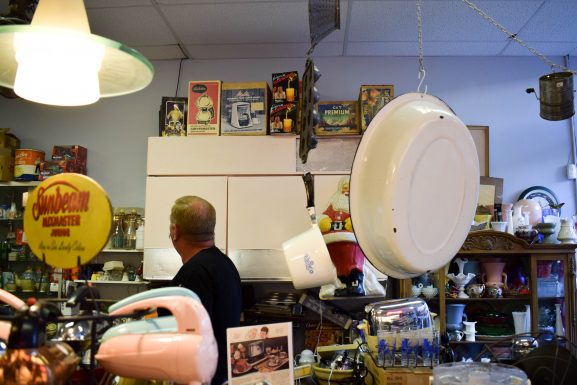 Local resident Derbie Fincher also feels that she doesn’t see the same quality in today’s mass-produced products as she sees in older items.

“They got a variety of good cookware,” said Fincher. “Original appliances that they have in here that they used to use back in my day.”

Boris’ original plan was to get rid of all of his things, but that doesn’t seem to be happening any time soon.

Horr and Tupitza agreed Boris is very knowledgeable about every product in the store and could tell you a great deal about general history.

“Things were built to last and if they didn’t, you knew why,” Boris said. “Now brands just slap a name on cheap products made in China, so you’re not getting that quality that you were getting before.”

-Text and images by Fletcher Jones and Mariam Dembele.

Among the residential areas of Roxborough, on the corner of Martin and Pechin streets, sits a towering stone structure called Bethany Lutheran Church. The church is home to a small community of faithful who live [continue reading…]

There’s a reason why the 21st Ward Baseball League has been around for nearly a century. The children and parents of the community have maintained a certain type of dedication that has kept this league a [continue reading…]