Bunny ears, decorated hats and bingo daubers filled the hall in Center City’s Gershman Y for a night of old-fashioned bingo … with a twist.

Philadelphia’s wildly popular event GayBINGO takes place every month and offers a night of fun and prizes, while also benefiting a good cause. GayBINGO has been around for nearly 20 years and is one of the many fundraisers produced by Philadelphia’s AIDS Fund, an organization designed to educate an increase in public awareness of HIV/AIDS throughout the city.

AIDS Fund, which was founded in 1989, created the GayBINGO fundraiser in an effort to expand its activities beyond the annual AIDS Walk.

However, GayBINGO is not just a game. The event is hosted by the “Bingo Verifying Divas,” or “BVDs” as they are commonly known, who are a group of drag queens dressed in outrageous costumes to entertain the crowd throughout the game.

Dominic Scudera, who also goes by the name “Summer Clearance,” is a BVD who has been volunteering at the GayBINGO events for about a decade.

“[My husband and I] started coming here and we wanted to volunteer,” he said. “We thought it’d be a lot of fun. So, we come very month and we’re in drag and it’s silly and fun. And since then, we’ve been doing drag more and more.” 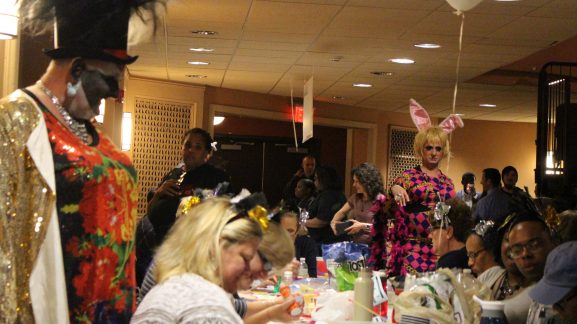 While GayBINGO is hosted mainly by members of the LGBT community, the event attracts a diverse crowd.

“Everyone is here,” said Danny Palmieri, group sales manager at the Kimmel Center. “It’s fierce. It’s fun. And who doesn’t like bingo?”

A returning volunteer for the GayBINGO events, Palmieri  feels as though the game not only supports a great cause but also brings people from different communities together.

Each month, GayBINGO hosts an event with a different theme – the last game was centered around Alice in Wonderland. The audience, along with the BVDs, dressed in top hats and bunny ears in the spirit of the night’s theme.

Though the event provides the guests with food and beverages sold in the lobby, the audience is also allowed to bring their own snacks into the venue.

As the hall filled with the night’s participants, music played and the BVDs mingled with the crowd. When the game began, members from different organizations tok the stage to showcase potential prizes. 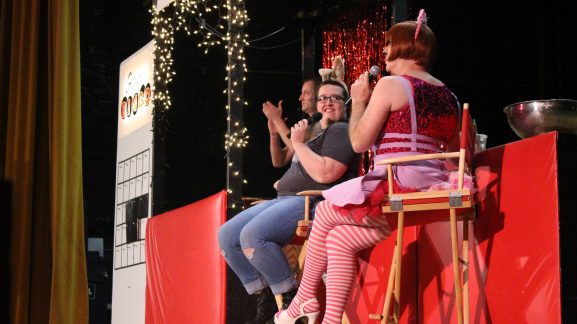 If a member of the audience called “Bingo!” one of the Bingo Verifying Divas checked the person’s  card.

Although the game is meant solely for fun and to support a cause, the volunteers of the event feel as though GayBINGO helps bring out a different side of their own personalities.

“This is my first full season as a Bingo Verifying Diva and I’m having a blast,” said Paul Struck, also known as “Tess Tickle.”

Though Struck only dresses in drag on occasions, he embraces his persona as “Tess.”

“I’m not necessarily a drag performer,” Struck said. “I do it because I have so much fun with it.”

Scudera also feels as though dressing in drag is a fun way for people to come out of their shell. “I think drag helps bring out the best in people,” he said. “And it allows you to create the person that you want to be.”

Though the BVDs are far from shy, some of them claim that dressing in drag is what helps them conquer their insecurities out of costume.

“I feel like I’m a different part of myself,” said Struck. “I feel like this drag persona Tess allows me to be a little more forward than I normally would be. Because out of drag, I’m actually pretty shy.”

Struck is not the only volunteer who enjoys himself when taking part in GayBINGO each month. With about six performers entertaining the crowd in one night, the BVDs make it their prerogative to mingle with the audience on both the floor and the balcony seating of the venue.

However, the Bingo Verifying Divas do not just walk up and down the aisle checking bingo cards the entire night. The game opens with a silly, yet hilariously sassy dance number by the queens. In fact, the event is filled with humor and entertainment from the Divas.

Scudera, dressed in a vibrant pink and purple dress supporting bunny ears, revealed that through his “Summer” persona, he feels even more comfortable in his own skin.

“I’m a much bolder person, and I’m much more confident and it’s a lot easier to talk to people and run up to people because it’s just fun, fun and silly. And I love it.”

Philadelphia’s lone LGBTQ film festival evolved from necessity. “We put qFLIX Philadelphia together for one main reason — the previous festival was abandoned,” director and co-producer James Duggan (above) said. Founded in 2014 by Duggan and fellow [continue reading…]

Chants of, “Stand up! Fight back!” echoed throughout LOVE Park on Tuesday, Oct. 23. Hundreds gathered to vocalize their concerns about recent threats to transgender civil rights and to show support for the transgender community. [continue reading…]