Meet Adam Schreiber, one of the many Philadelphians who has fallen in love with beekeeping.

Schreiber got his start with beekeeping nearly eight years ago in 2009 when a friend recommended the hobby to him. He now has hives scattered all across the city.

“A friend of mine was keeping bees and I’ve always been into being outside – I like to garden and stuff,” Schreiber said. “He kind of put the idea that I would be a good beekeeper which I didn’t know what that meant at the time. He gave me a bunch of gear to get me started, and kind of mentored me through my first season.”

When most people see a bee, they tend to go the other way. While beekeepers are passionate about the insect, they are still not immune to the hazards of being surrounded with bees.

“A lot of the times you don’t get stung,” Schreiber said. “It’s not like every time you check your bees. But yeah, it happens. It’s impossible to avoid as a beekeeper.”

There are bigger issues beekeepers face, too, especially living in the city.

“I’ve had hives vandalized,” Schreiber said. “I’ve had a hive knocked over. I’ve had honey stolen out of my hives. For me that’s been my main difficulty.”

However, keeping bees in the city does have its benefits. Schreiber said because the city is so big, there are a lot of beekeeping groups which leads to a lot of extra support with the hobby. 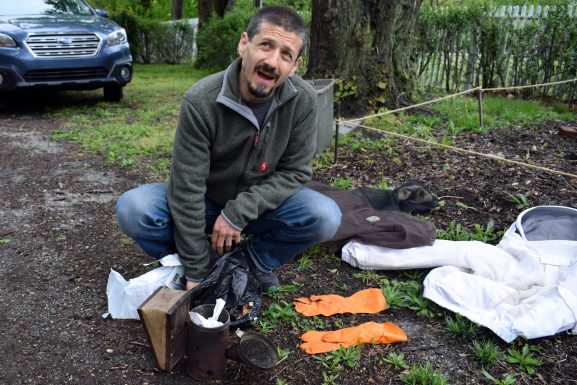 One of those groups is the Philadelphia Beekeepers Guild, which Schreiber is a member of. The guild has been around since around the time he started keeping bees and he was one of the first members.

“Philadelphia didn’t have a beekeeping association, well, an official one,” Schreiber said. “The guild grew. We had maybe 20, 25 members the first year and now we have like 125.”

The guild’s communication coordinator, Kathy May, said it has about 100 households who are a part of the guild and keep bees around the city.

May hosted a honey bee hive for five years before getting involved with beekeeping herself.

“A colleague of mine at work, her husband got into beekeeping and he wanted to be able to have more hives and he asked if he could have a beehive in my backyard,” May said.

May decided she finally had enough free time to try the hobby herself after retiring two years ago.

“I became enamored with learning about these bees and how intelligent they are,” May said. “And how very complex a little society they have inside these hives.”

There are many reasons why people choose to keep these small-scale honey beehives.

“I collect some honey to eat at home, to give away,” Schreiber said. “I sell a little bit of it if there’s enough to sell. But most of it I give away to friends and family.” 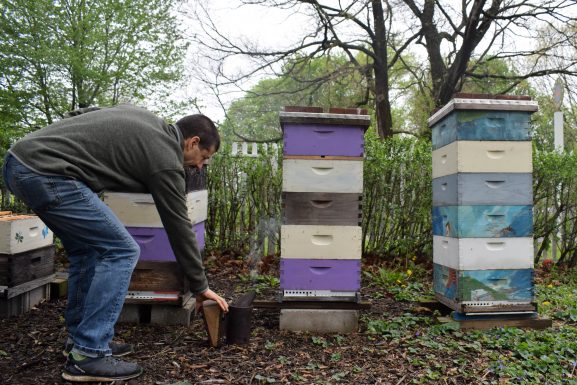 While most treat it as a fun hobby, others are more concerned with the environmental impact of beekeeping.

“I figured, well, this is my way to give back and help the environment, too, because I knew we needed more honeybees and we were having pollination problems,” May said.

The Philadelphia BeeKeepers Guild estimates a population of about 48 million managed honey bees in the city. This is based on the math that there are about 800 hives maintained by local beekeepers, each with peak populations of around 60,000.

Although beekeeping is rising in popularity, the wild bee population is steadily on decline. According to a study published by researchers from the University of Vermont, bees are disappearing in 139 of the nation’s most vital agricultural counties.

This issue extends beyond simply agriculture. Each year $3 billion of the U.S. economy depends on pollination from native pollinators like wild bees. 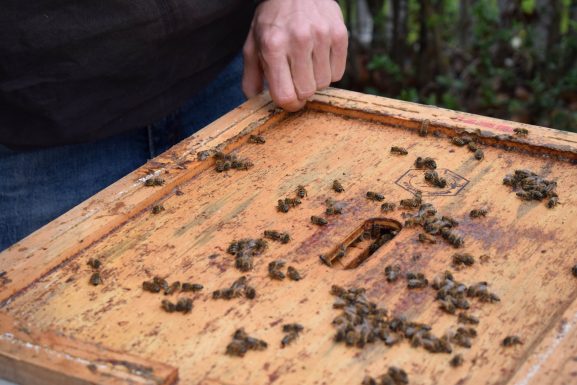 Beekeeping can help, but that’s only with persistent and responsible involvement with the activity.

“Those who start don’t always stay,” May said. “The reasons they get into it aren’t long-term reasons to keep them engaged over years and years. Many people are enamored with the idea of, ‘I can have honey bees and I can have honey.’”

Nonetheless, there has certainly been a rise in awareness of issues related to bee population. Schreiber believes that the surge of beekeepers that can be seen nationally can be seen in Philadelphia as well.

Beekeeping is different when viewed on a commercial level. Don Shump is the owner of Philadelphia Bee Company and knows firsthand the struggles of keeping bees on a large scale.

Shump has been keeping bees for about 10 years and started his company about five years ago.

“I took up beekeeping as a hobby to start,” Shump said. “I saw a video of a guy that was keeping bees in Manhattan. I said, ‘If he can keep bees in Manhattan, I can keep them in Philadelphia.’ His company is now one of the largest of its kind on this side of the country.”

Philadelphia Bee Company serves three main purposes. They provide bee removal, specialize in honey production and provide overall education. The company does visits to properties that have swarms of bees or any other similar flying insect. They also manage colonies all over the city, all of which produce different varieties of honey during different seasons.

Shump educates others on bees and beekeeping through speaking engagements at universities and at events such as the annual Philadelphia Flower Show. 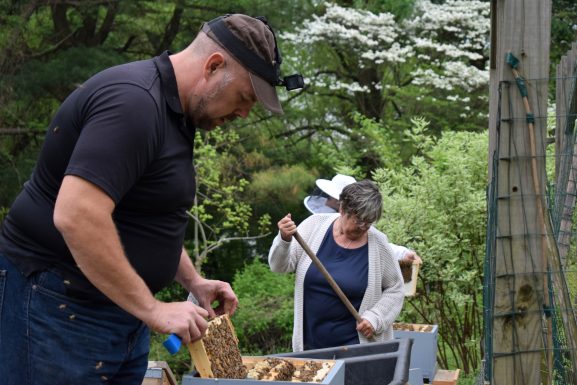 Bee populations are declining worldwide, as well as here in the United States. The United States Department of Agriculture reports that the largest stressors on bees are Varroa mites, other pests and parasites, diseases and pesticides.

“I’m concerned about the situation of bees across the world,” Coulter said. “I wish that more people understood that.”

Nationwide, commercial and small-scale beekeepers lost 44 percent of their honey bee colonies during the last reported year of USDA data. In Pennsylvania, just between January and March, 2,900 documented colonies were lost, about 23 percent of the total.

Shump was a victim to this too and recently lost about half of his bee colonies. 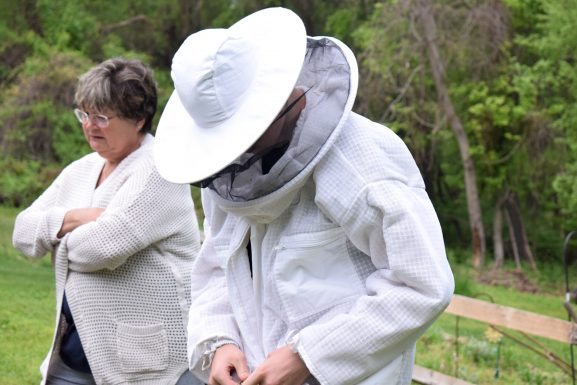 However, Shump said from his own observations that wild colonies survive at much better rates than the managed colonies.

“When they’re isolated, they can mate with other feral colonies and then its survival of the fittest,” Shump said.

He has one idea on how he can have a more sustainable managed bee population within his farm.

“I hope to find a genetic line that is locally acclimated to Philadelphia, so that they can survive better,” Shump said. “And that we can spread similar genetic lines throughout the county, and no one brings in outside stock.”

Urban residents who view honeybees as pests and kill them obviously do not help the problem.

“People are too afraid of bees,” Coulter said. “A lot of them don’t understand if they weren’t here, neither would they be.” 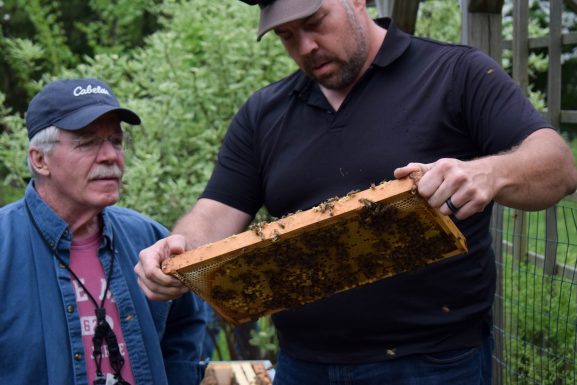 Although that nearly perfect scenario may not be possible, Shump is still motivated to dedicate his time to beekeeping.

“Beekeeping is never boring,” he said. “I used to be a web developer. I was sitting on my duff for 40 hours a week watching my waistline and my blood pressure go up. Beekeeping like this is crazy. Its fun, I love it.” 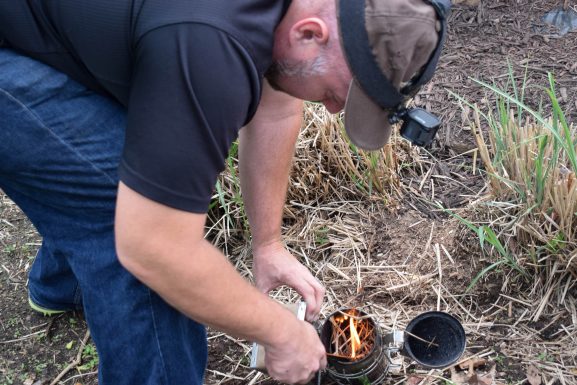 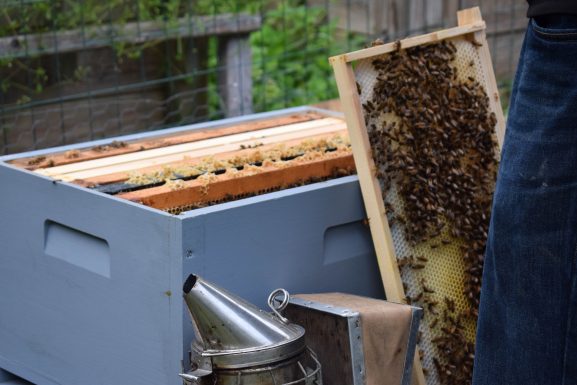 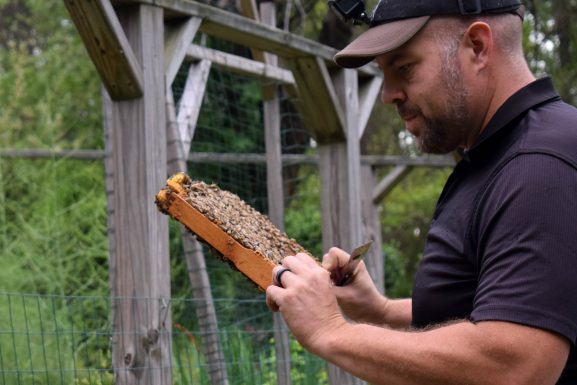 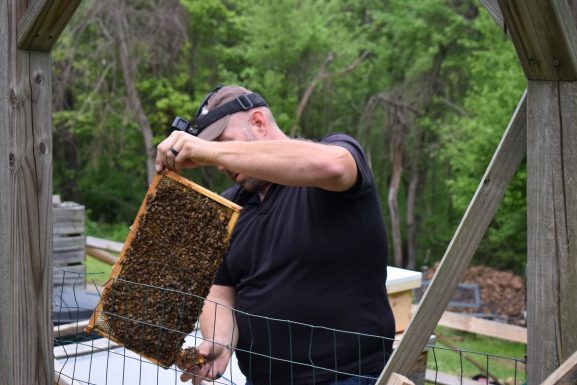 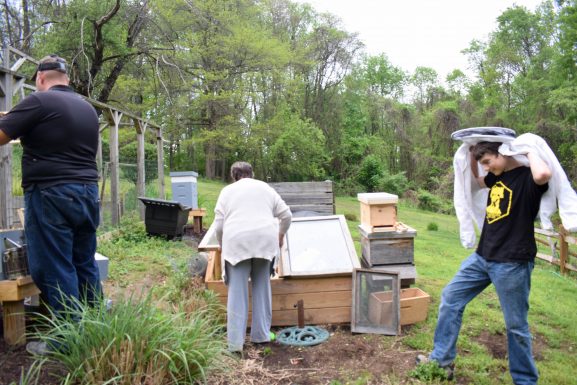 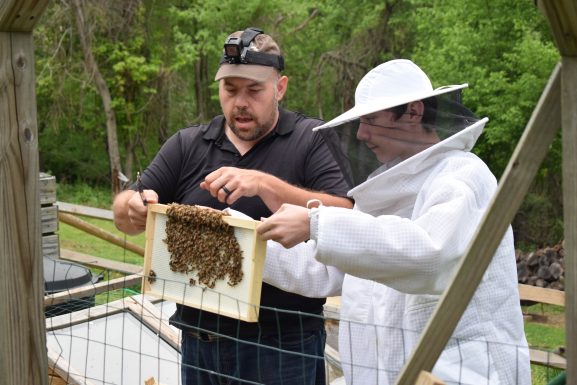 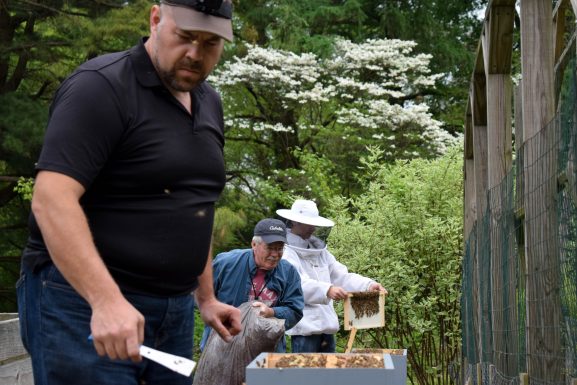 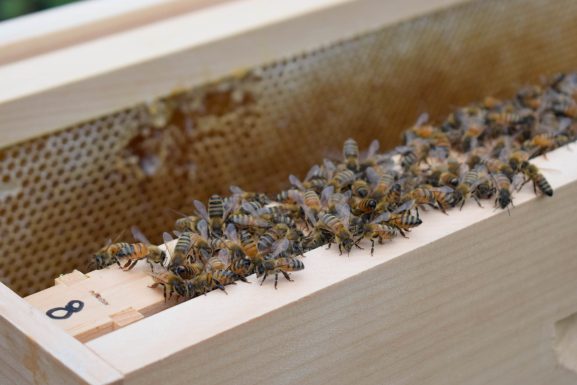 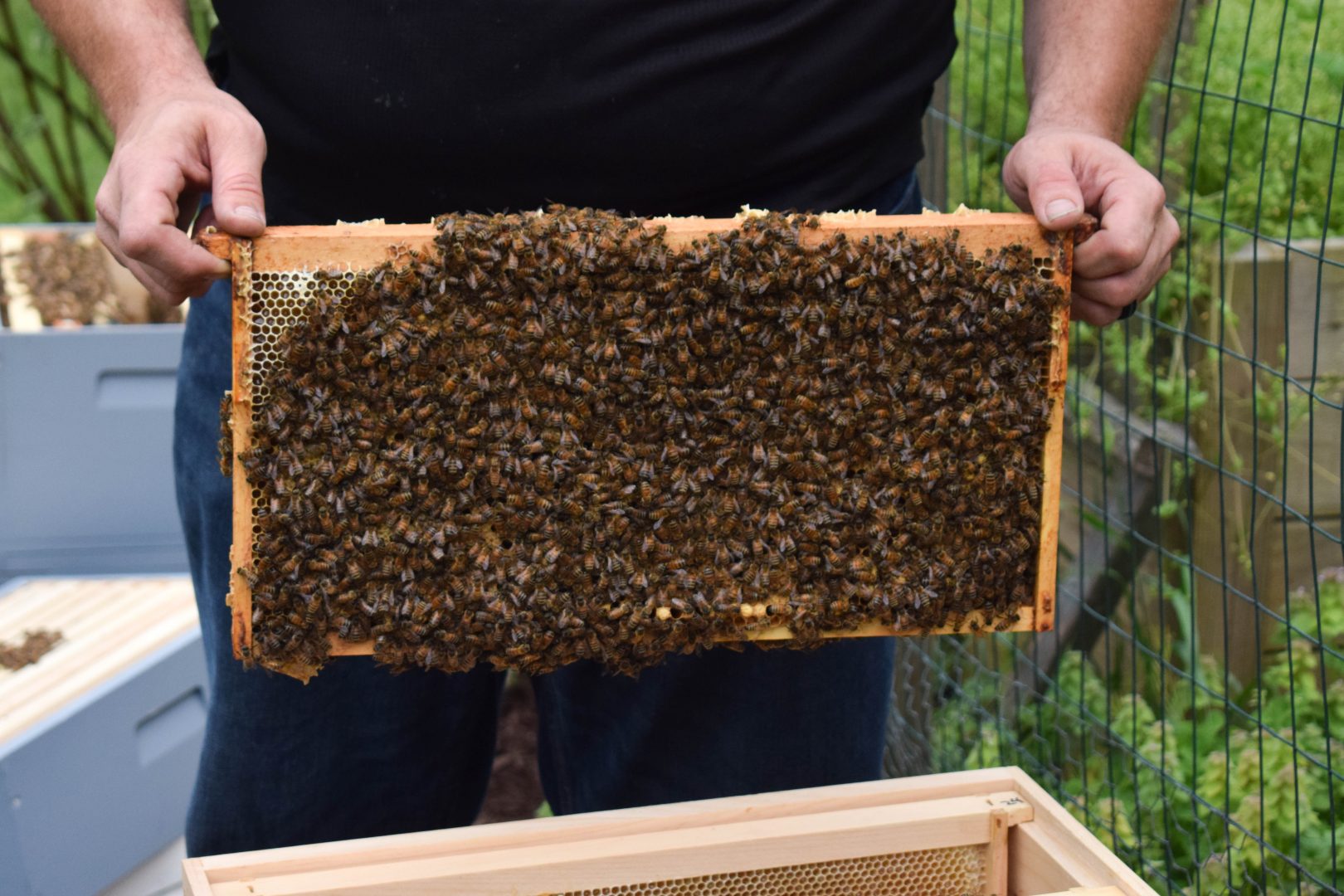 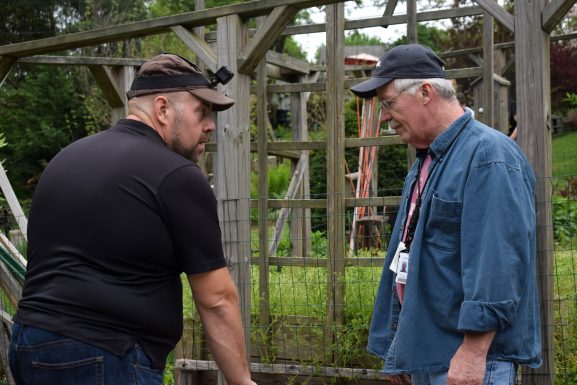 <
►
>
Coulter holds onto the sheet with the queen bee while Shump explains what will happen next.

-Text, images and videos by Fletcher Jones and Mariam Dembele.

Mantua: Shop Owner Gives A Part of Herself to the Community

Phyllis Jones-Carter provides the magic behind the thriving consignment shop located on the 3800 block of Lancaster Avenue. Jones-Carter actively supports the neighborhood and works to strengthen the community in hopes of helping it thrive [continue reading…]

Veronica Dunbar has called Brewerytown home for two years now. Originally from Southwest Philadelphia, she grew up in her father’s barbershop, where he worked for nearly 40 years. Surrounded by hairstylists from a young age, [continue reading…]