When people think of Philadelphia boxing gyms, a family environment is probably the last thing that comes to mind. At Philly’s Next Champ gym at 1810 Grant Ave. in Bustleton, families train together.

“We have whole families here taking classes,” said 49-year-old boxing trainer Mike Cassell. “I never saw that in a gym growing up.”

Cassell, who was a Philadelphia boxer back in the ’80s, is now training young amateurs.

Julianna Herff first came to the boxing and MMA gym with her father. At just 16 years old, she said the gym offers a lot more than just teaching people how to fight. 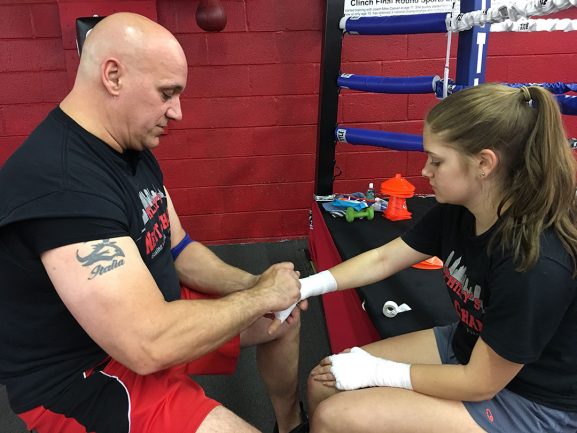 “A lot of people come in here and make friends,” Herff said. “Whenever I’m upset and come in, everyone is here for you and cheers you up.”

Kevin Manacchio likes the camaraderie there. The 52-year-old Manacchio, who lives in Somerton, trains with Herff during weekly classes.

“I’m kind of like her big brother in a weird way,” Manacchio said.

Cassell’s main philosophy is movement creates opportunity. The North Philadelphia native said his philosophy applies in and out of the ring.

“If you stand still, you are going to get hit,” Cassell said. “Create things for yourself. Move. Don’t sit back and let other people take opportunities. You take it.”

Herff, who is training for her first fight in Manayunk, feels a lot of nerves going into her amateur debut. 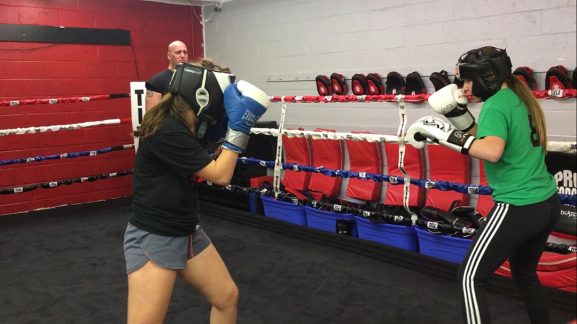 “This is my first fight, so I really don’t know what to expect,” Herff said. “But I am confident because I know Mike puts a lot of time into this and he is really experienced at boxing.”

He knows what a first bout is about and feels like.

“The first fight is about getting over the fear of getting into the ring,” Cassell said.

Cassell does not want to give Herff too much advice before her match. The trainer has adopted his father’s laissez faire approach to working the corner.

“He was like the best cornerman I had because he never really said anything,” Cassell said. “I would have guys sometimes give me so much, tell me so much. I’d be trying to remember, which wasn’t good.” 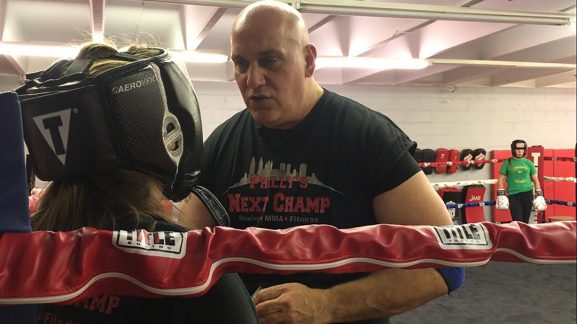 Cassell said ingraining three particular values are the most important lessons he can instill in his young amateurs. Patience, discipline and confidence are the key values taught at the gym, which is hidden below a PAWS adoption center.

By extolling principles and having a consistent presence, it is not uncommon for unique bonds to grow out of the gym. Cassell and Herff have a special relationship that goes beyond just a fighter and trainer.

“I consider her a third daughter,” Cassell said. “Our relationship is a little bit more than coach and fighter. Obviously I care about these kids a great deal…. We are family.”

After a trip to Legacy Youth Tennis and Education last year, Eric Worley had a vision. Joined by Legacy’s president and CEO Kenny Holdsman (above), Worley walked the halls of the East Falls complex and was impressed by the programs and [continue reading…]

https://vimeo.com/92579370] The Holocaust Awareness Museum, which opened in 1961, is located inside the Klein Jewish Community Center at 10100 Jamison Ave. It has held many events, including one on April 11, which brought 139 students from five [continue reading…]