On Saturday afternoons throughout the summer, the Cobbs Creek and Haddington branches of the Free Library of Philadelphia host Philly Bop dance classes.

The bop is a style of dance that was popular in the 1950s and throughout the 1960s that was created by African Americans based upon 1920’s era Lindy Hop, Jitterbug and East Coast Swing traditions.

Haddington’s branch manager Marvin DeBose thought about developing the series of classes while at a recent family wedding.

“I noticed so many of the younger people participating in the line dances,” said DeBose, “but a real lack of the couples dancing that you find with the traditional bop style my parents and their parents enjoyed in the 50s. I thought there was real potential in this type of class.”

DeBose wrote a proposal and secured funding via the Free Library system for the summer dance series in an aim to foster the rebirth of the bop in his community. 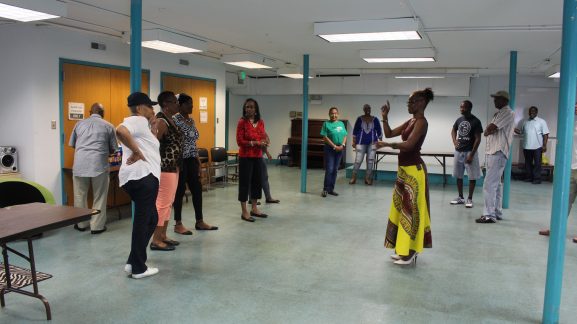 “It’s an important part of African American history in this city that we need to communicate with our generational peers and with younger people,” said dance instructor Melissa Talley-Palmer, who teaches the summer series and previously wrote a grant for her own series of bop classes throughout the city’s library system.

“The Philly Bop is a smoother and more stylistic version of the Lindy Hop and East Coast Swing styles,” said Talley-Palmer. “What makes it unique is that it’s a six-count dance that includes a double step and rock step combination. Each neighborhood in Philly would put its own twist on it.” 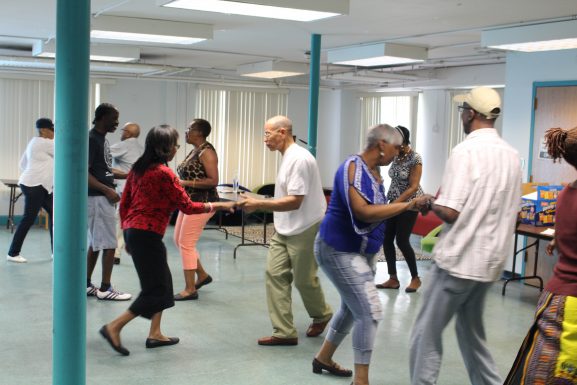 DeBose fondly remembers the bop at its height of popularity.

“The dance debuted on ‘American Bandstand’ at 46th and Market and was a really important and proud moment for Philly,” said DeBose. “Now, people in their 30s and 40s want to learn it because it’s not only fun but it celebrates our cultural identity.”

The site at 3911 Lancaster Ave. was once home to a furniture store, then it was home to a Salvation Army, but then it became another vacant Philadelphia storefront. Hidden behind mature pear trees, people [continue reading…]

[vimeo 65434018] One of Philadelphia’s oldest high speed lines, the Market Frankford Blue Line, allows commuters to travel between Center City and West Philadelphia within a matter of minutes. However, from 1999 to 2009 the train [continue reading…]