As the sun rises on Hissey Playground at C Street and Indiana Avenue there’s usually a bit of a mess. Being in the shadow of the unofficial heroin capital of the region, Department of Recreation personnel must take care of cleaning up the needles, baggies and bottles that found their way to the sports field and playground area overnight.

The cleaning is something especially important during the summer months since neighborhood kids arrive early in the day. For a couple weeks each year, the local police district officers help run a soccer clinic there.

“We come early to make sure its clean too,” said police officer Tina Willis of the 24th District, adding that people from Prevention Point also help with cleaning. “We don’t want the kids to see that.”

Every summer the 24th Police District partners with the Kensington Soccer Club to run the camp for kids at Hissey.

Ariel Joyner, 8, said she’s been playing soccer since she was 3 and enjoys the camp.

“You get to kick the ball and run fast,” she said. “When my Nana knew I liked soccer so much she just signed me up.”

For Brandon Lebron, 10, camp has been painful at times..

“Being a goalie was not fun,” he said, explaining that the ball hurt when it hit him.

If not for the camp, Brandon likely would be playing soccer on a game console or outside of his home. The camp has given him one advantage over playing in the street.

“One day we broke a window,” Brandon said. “I like soccer but I’m not good at aiming yet.” 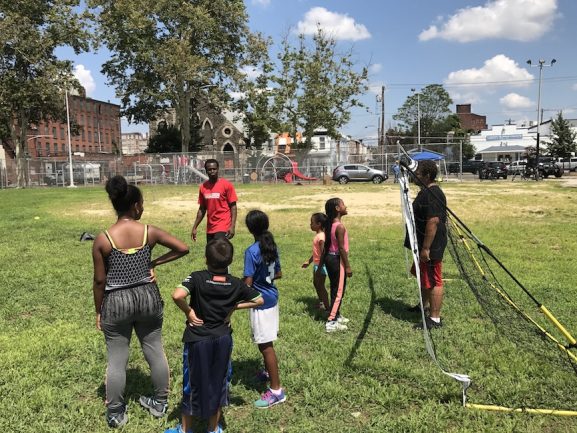 Kyle Palmer, 24, coaches one of the club teams for Kensington S.C. He helps with the camps every year but said it has little to do with the dribbling and kicking.

“It’s not just soccer with us,” Palmer said. “During the season I’ll take them out for pizza or ice cream and ask them what may be bothering them at school.”

Palmer’s under-9 boys team went undefeated last season and took the championship. But at the camp, he cares more about how the kids who show up enjoy their time.

“I love that we put a smile on the kid’s faces,” Palmer said. “A lot of them come alone. Maybe there’s something going on at home that a parent can’t take them. We have special handshakes and, you know, high-fives. That kind of thing, most of the kids love it.”

“It’s about giving back to the community,” Palmer said. “Especially this community.”

By “this community” Palmer refers to a neighborhood mere blocks from ground zero of the opioid crisis that has contributed to a staggering amount of arrests and countless human casualties. Most of the contact with law enforcement here involves handcuffs, not nets and balls.

“In this neighborhood, they see a lot of crime,” Willis said. “Narcotics, prostitution, robberies … they see the stuff every day. They think this is the norm. We want to show them something other than that.” 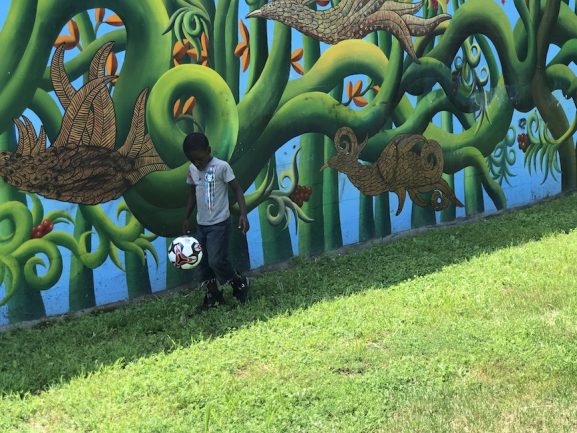 John Rajkowski played soccer at Father Judge High School before becoming a police officer. He enjoys the camp because he gets to share his soccer skills but also show the kids he’s not against them.

“They know that we’re cops,” he said. “A lot of people make us out to be the enemy. We’re trying to end that … we’re not the enemy and we’re actually here to help you.”

The 24th District Captain Dan O’Connor was out of town for training, so he asked 25th District Captain Javier Rodriguez to check in with the campers. Since many of the kids live on blocks with active drug corners, officers maintain a presence at the camp to make sure users don’t shoot up near the field.

“It gets them away from that into a controlled environment,” Rodriguez said. “Nobody’s going to come around here, not while we’re here.” 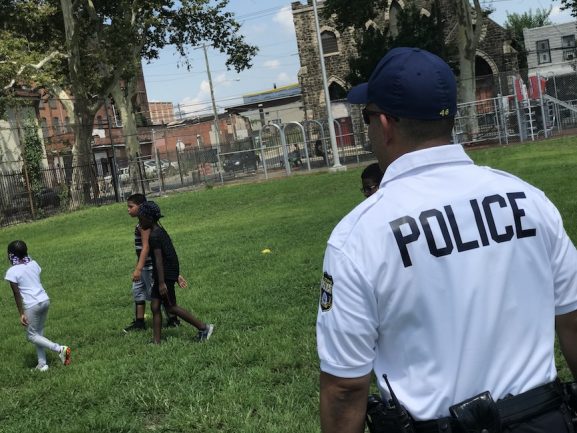 Layla Santana is 8 years old, but stressed she will soon be 9. She’s just happy to be at camp since it gets her out of her house.

“I’m the only girl in the house!” she said, adding if she wasn’t there she’d be outside with friends. “[I’d] be around the corner playing with my friends that used to live on my block.”

But the blocks within close proximity to the park can be a dangerous place. Rodriguez said he’s sympathetic to addicts and all that’s going on at nearby Gurney Street, but he also said it’s time to change the narrative.

“The story’s bigger than just them and down the tracks,” he said. “The story is about these kids and everything they have to go through every day, when they go to school, when they come to this park, when they come home from school. That’s the story that has to be told. They try to make drugs a victimless crime, but it’s not.”

At a playground in the 25th district, Rodriguez described a recent scene.

“I got kids playing in the jungle gym, but there’s needles all over the ground,” he said. “One kid playing handball in bare feet. I had to tell him to put his sandals on, but they become so numb to it.”

It’s not just about getting away from something negative though. For a lot of these kids, the camp is a way of getting food. 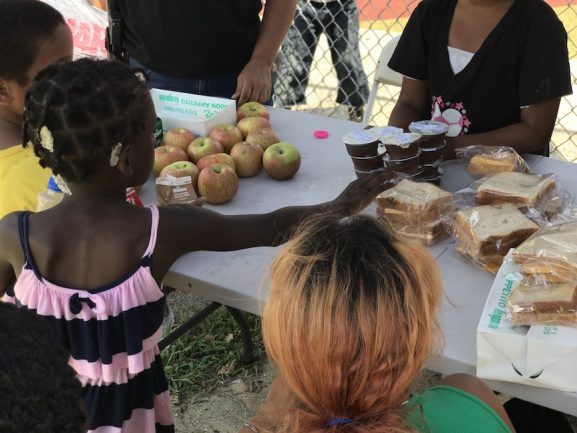 “Do you want some apples?” Willis asked one girl.

Willis and Officer Cynthia Padua take care of making sure the kids eat. They explained the food aspect of the program.

“One thing I do know is that in this community, the reason why they have Play Streets, and the city, and Archdiocese, and the state provides the free lunches, is nine times out of 10 a lot of our children are only eating during school hours,” she said.

The Archdiocese of Philadelphia donates and delivers food boxes to the camp. It helps fill a void between June and September when school is out for summer. 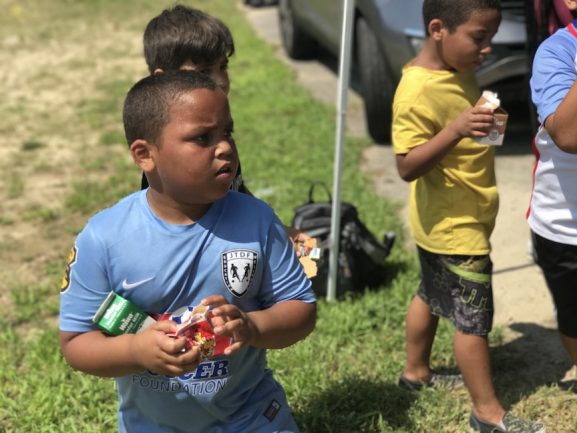 The food is on the healthier side, milk and apples for example, so it doesn’t exactly excite every 8-year-old.

“But when they come back for seconds it’s a sign,” Willis said. “that they’re not getting all that they need.”

Padua added how the kids aren’t just thinking of themselves.

“I notice that they take extra for smaller siblings [at home],” she said.

She isn’t the only one to have witnessed the kids’ survival savvy.

“One thing I want to say about these kids, they’re smart, They take care of one another,” Willis said. “So say if mom or dad … is out there on drugs or something, these siblings are so tight knit that they make sure that one another eat.” 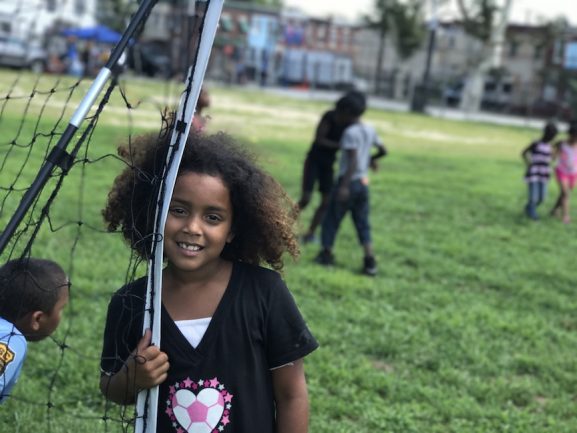 When there is extra food, those running the camp make any surplus available to kids who didn’t attend the camp.

“So when we have extra we put it out here on the table,” Willis said. “It’s called the share table. Anybody can ask for a lunch as long as they’re under the age of 18. And that’s throughout the city of Philadelphia.”

Even as veterans of some of the city’s toughest streets, the situation impacts officers emotionally.

“It’s kind of sad,” Willis said. “But I’m happy to be part of the program so this can happen.”

The kids eat up more than the food though. During breaks from soccer they relax on the playground equipment and talk about school, other friends and, of course, the most recent game. 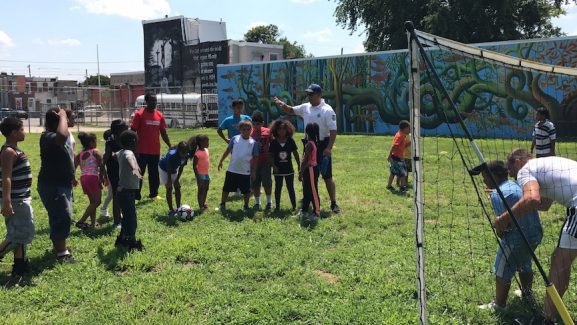 K’breahn Lawhon, 11, said he’d probably be playing basketball if they didn’t have the soccer camp but considers himself a soccer fan. He wants to play both sports at his school but couldn’t last year.

“I had to go downstairs at [school] because of my anger issues, “ K’breahn said, adding being “downstairs” put him with other kids who didn’t follow the rules. Students in that situation can’t participate in the extra-curricular activities offered at the school.

“I don’t want to be downstairs anymore,” he explained, noting this year he’ll be upstairs again. “I changed my behavior.” 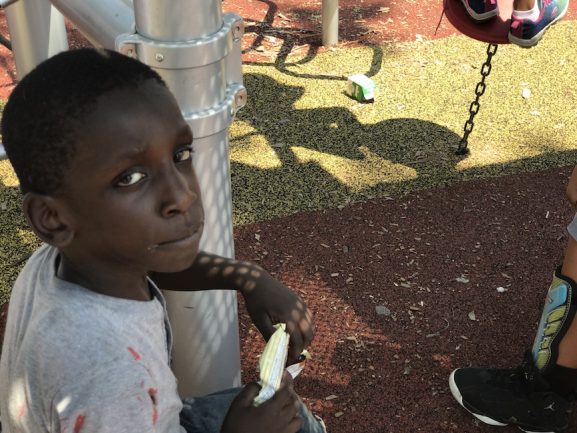 As the youngsters departed on a Friday, one called back to the officers.

“Do we have soccer tomorrow!?”

“No tomorrow, Monday,” Willis yelled back. “See you, babe.”

The little girl gave a long look back, then smiled and waved.

“Ok, see you Monday!” she yelled and ran off.

Hunting Park: Residents and Police Work Together Towards a Less Violent Community

Residents of Hunting Park and the police who protect them gathered together this week in the basement of the Tioga United Methodist Church. Residents sat in the fold up chairs talking amongst themselves at the […]

https://vimeo.com/41123683] Finding a really helpful neighbor can at times be difficult in some urban areas, particularly on blocks where one-third of the properties are abandoned and vacant. However, if you live on the 900 block […]

While it can be difficult to pinpoint the exact number of homeless individuals living within a city, the city of Philadelphia’s count as of January 2016 determined 705 people living within the city were entirely unsheltered. Local nonprofit organization Project […]