One night last November, Alicia Lynch finally got home from her job as a school counselor at New Foundations Charter High School. She just wanted to share a meal with her husband and three children.

“As I am eating dinner with my family, I receive a text from a co-worker to check my email immediately,” she said.

“These normally consist of attending a workshop, meeting with your department … [and] were built into our school calendar for one Wednesday each month,” she explained.

But when Lynch logged on to sign up, none of the remaining options were something she felt would help her grow professionally or help the community. The next day at work she realized many of her co-workers shared her disillusionment.

“When I went to work the next day, about 90 percent of the staff was furious. And for the right reasons,” she said. “Teachers united and wrote down their personal reasons why they were not happy with the upcoming, mandated professional development. All but four total teachers signed that they would like to use a personal day instead.”

A teacher at New Foundations must sign a contract that essentially gives the school broad power to terminate employment. It also has language that seems to allow the school to have employees do anything, even non-educational things.

So it began. The teachers sought solutions to their predicament.

“They could have me mow the lawn,” said Joe Burns, an AP English teacher and leader in the school’s unionization effort. “It’s not a [teaching] contract. It’s essentially a personal services contract.”

In December, Lynch and her co-workers began the process of a unionization vote overseen by the National Labor Relations Board (NLRB). The school has appealed the decision of the NLRB to let teachers choose to unionize or not.

While no one from the administration ever handed a teacher a weedwacker, the teachers point to ominous language in their contracts: “The Board of Trustees of New Foundations may also terminate this agreement without cause for any reason whatsoever by providing the employee with 30 days written notice…” 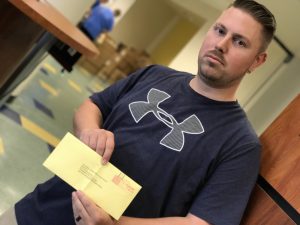 Riegler noted while money isn’t his motivating factor he has only received two raises and they were small, adding that they failed to even keep up with the cost of living.

“I got into teaching because I wanted to pay forward all of the positive things my teachers did for me,” he said. “Not many teachers get into the profession for the money, but a living wage … is a necessity.”

Jane McGregor, a chemistry teacher, has been at the school since it opened eight years ago.

“I was a chemist for 22 years before I changed careers to teach,” she said. “I could make a hell of a lot more money if I went back to that and I could go back tomorrow. But I love doing this.”

She and her fellow educators seek job security and more input in determining how to spend non-classroom time.

Others elaborated on how the unification of educators would affect students.

“[Unionization] means retention of teachers,” said Burns. “New Foundations is bleeding quality teachers. The low pay … and lack of any semblance of job security have left the faculty feeling vulnerable, unappreciated and disempowered.”

“Yeah, many good teachers left to go to the school district,” McGreggor added.

According to Burns, the administration’s actions run counter to the philosophy of charter schools he believes in. He cited former American Federation of Teachers President Albert Shanker’s views from a speech in 1988.

“He said charters are a ‘way to empower teachers, free them from overly bureaucratic regulations, and strengthen their voice in school and curriculum decision-making,’” Burns noted.

Not all teachers are on board with the union though. Nicole Hackett has been with the school for seven years.

The union that employees would join with a “yes” vote is Alliance for Charter School Employees (ACSE), a part of the American Federation of Teachers Pennsylvania.

Dan Dueholm is a staff representative with ACSE and said the concerns of the New Foundations Charter teachers are typical.

“One commonality is having a voice about what goes on in the school,” Dueholm said. “They want to have a concrete way to put their concerns and issues into practice.”

Dueholm said the lack of just that was what got the ball rolling.

“They could air their concerns about this, that or the other but they were ignored,” he said. 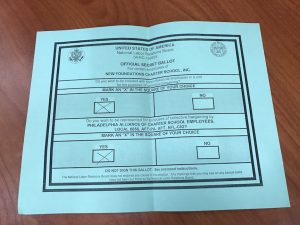 School administrators could not comment fully on the issue.

“The lawyers … said we can’t say anything positive or negative while the voting process is going on,” said New Foundations Charter School’s president of the board of trustees, David Lambie.

School CEO Paul Stadelberger also followed the legal advice but did elaborate about the school and its staff.

“We’re one of the highly rated charter schools not only in the city but in the state of Pennsylvania,” he said, noting that more than 5,000 students on the waiting list to get in the school. “We’ve done a fantastic job and it’s because of all of the hard work of our teachers, faculty, staff, administration.”

Either way the vote goes, Stadelberger hopes the relationship with the faculty can stay strong.

“I would hope that no matter which way the vote goes that we will continue to work as we have in the past for the success of the students,” he said.

The teachers, who could look for jobs elsewhere, seemed to feel the same way.

Lynch said her anger on that November evening did not come from having to work unpaid, but rather the lack of input from the staff on that work.

“For the past seven years we have been mandated, unpaid, to attend evening events at school amongst many other mandatory and unpaid duties that are often thrown at us last minute,” she said. “I never complained because it was for the students. But my family does complain that they see so little of me.”

The ballots are scheduled to be counted by mid-August.

The Union League of Philadelphia has always had ties to the military, beginning with its inception in 1862 to support Abraham Lincoln and the Union. The elite, members-only club is continuing this tradition through its [Read More]

Joe Gordon has been an immigration lawyer since 2012. His office may be based in North Philadelphia at 4719 N. Broad St., but his work takes him throughout the city and the effects are felt [Read More]

Education: A Look Inside the District’s Struggling Schools

—Text and image by Lora Strum and Ashley Hart