María Quiñones-Sánchez took office 10 years ago representing District 7 in Philadelphia City Council. Long considered a party outsider, it is not uncommon to find her battling politically with Latino leaders in her own neighborhood, as well as other council members. Her sprawling council district is comprised of a wide area, covering all or parts of 12 of the city’s 66 wards.

In your district there are some folks in deep poverty right now. They’re living in or near concentrated drug havens, yet they’re not far from the wealth of Center City.

How do you fight income inequality?

One of the things we’re acutely aware of is that we have to have quality, affordable housing. How do we take some of these blocks and create affordable opportunities? We’ll have some stuff coming up this fall, a pilot that we’re looking to launch in the Kensington neighborhood around affordability.

How do we better leverage the capacity of the private sector along with our public partners, for example the Play Streets and all of the other stuff, and have a better coordinated strategy? SEPTA for instance. We brought the SEPTA general manager out a couple months ago and said to him, “These SEPTA stops are your business fronts and they look a mess.” And he rode the train up here and agreed. And [they have] increased not only the SEPTA police presence through Chief Nestel, but they’ve done enhanced cleaning and working with Impact Services on the corridor.

I think everybody wants to help but city government isn’t always the best [for] coordination. One of the things we’ve proven through the Conrail cleanup and this other stuff is that we can be better coordinated. So I think you’re going to see a lot more of that.

There’s never the political will to talk about inequality. The haves are better organized, have louder voices. The have-nots manage to do a whole lot with very little. How do we articulate how important it is that a major city with such deep poverty, with major segregation, how do we say to folks, “mixed income neighborhoods are the best neighborhoods, culturally diverse neighborhoods are the best neighborhoods”? So that when we do these public infrastructure investments the long-term residents don’t feel like, “Oh you’re gonna push us out. Is this the beginning of us getting pushed out?”

Every time I do an improvement since I got elected it’s like, “Is this for us or is this for the people coming in?” And I’m like, “What are you talking about? You deserve this.” So how do you create that political space to say what happens at C [Street] and Indiana [Avenue] is important to downtown? That big corporations and those jobs are never going to come if there isn’t an articulation of mixed neighborhoods as opposed to concentrated poverty? Which is what our housing policy has created right now.

We have high value land and we want to sell it for short-term gain as opposed to, how do you create affordability there so that you can create that mix? How do we use our asset base to do that? Center City at its core is almost developed. So as you develop in the neighborhoods, what’s going on in Fishtown and even in my own community of Norris Square should not be about gentrification. How do you keep those long-term residents there and then bring in some of the folks who are clearly buying there because of its locale to public transportation, but how do we make sure that its long-term residents can afford to live there?

What can be done about it? And what are some example of how to do it?

For the last 20 years there have been people in here doing great work. We want to make sure we recognize that and give them better tools. I mean they’ve done it despite us. So how do you give them better tools? How do you facilitate Jim Hardy, who is a teacher at Kensington, to be able to expand his services? He brings what he brings through the game of soccer to the facilities.

When I got elected I came up with a 10 year Parks plan. So clearly when Kenney starts talking about Rebuild, for me that’s a no brainer. Because I know that for many of these young people, these green spaces is what they have its what they know.

[Hissey Playground] was closed for the first three years that I was elected. The fourth year we decided to do a cleanup as a staff. We came out here and folks were like, “You’re gonna clean it and folks from the outside are gonna come and dirty it.” Because that was [during the first] phase of people just shooting up. But [the neighbors] now have a friends crew.

We’re trying to tie in the Indiana Corridor to McPherson here. Then we’re looking at the park at A [Street] and Indiana [Avenue] and saying, “How do we connect these parks with active play and passive play?” The first phase we planned in the neighborhoods was the playground, which we’re looking at the field. It’s not a regulation size field, but what else do we do here to encourage more active use? It’s literally a day to day situation. 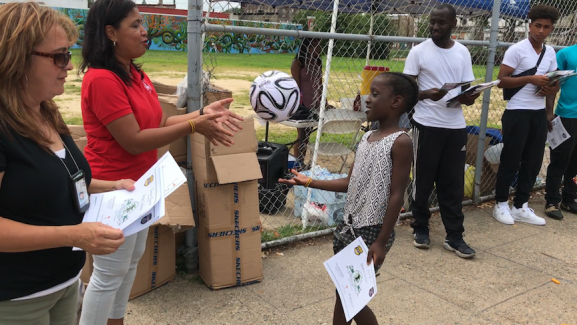 So improving the neighborhood is big component, but what about directly to individuals?

One of the things I’m acutely aware of as an elected official is that I represent a lot of people at the bottom of the pay scale. One of the things that I do is that I looked at my data sets. The data tells the story of what’s going on, what’s happening and if we’re hitting a cliff. When I got elected 20 percent of the water debt (from unpaid household bills) was in my district even though I’m a tenth of the city.

We started chipping away at utility issues, PECO issues. And the water one was like, this is crazy. This is a government owned utility, how did people get into this debt? We quickly figured out that the IWRAP program, the level of bureaucracy around it was crazy. Now some of us think water is a right. We coupled that with our 25-year stormwater plan. We worked with the administration to come up with the most progressive plan that recognizes our high rate of homeownership. For one, we stopped all [property] foreclosures related to water — ain’t nobody losing their house because of the water bill. Then we looked at what is the most progressive way to do it. We got the water department to hire an expert and we looked at all the plans across the country. Now we’re known for [having the plan].

I mean I’ve been talking to folks in Detroit and folks in California and everyone is like, well how did you get this done? And it’s like, the data tells the story, folks. If you look at your datasets you’re going to see that you have a problem.

How do else can the city help those on a fixed income? What about the elderly?

That’s where having a comprehensive affordable housing strategy becomes important. It’s better for people to age in place as opposed to putting them in these facilities.

I just did an inclusionary housing bill and the development community is like, you’re gonna stop development, Maria. What is wrong with creating a couple affordable units within [a new building]? Wouldn’t it be nice to have two senior people be able to live downtown and have access to quality? That’s not an intrusive request.

When we do space we try to do it intergenerational. Look at Collazo at Mascher and Allegheny. So I have 500 seniors that live [nearby]. We did a walking track. We did some seating areas for them. Why? Because they come out and they walk and they breathe good air and all those things become healthy. They’re going to have a supermarket across the street. We have a life center there for them. When we fix Rivera we’re giving them an entire first floor for senior programming. Those are quality of life issues

When seniors come to the park it makes [the park] safer.

What are some of the obstacles?

The uniformity clause kills us. I think there is a move around the bifurcation of property taxes. There’s a discussion. It’s obviously being led by some of the big business folks. Part of the problem with the current legislations as it passed is that it ties City Council’s hands about how much we can move the needle either way. We really got to articulate a long term strategy for this.

When the mayor says every neighborhood, every zip code, what does that really mean? How do you make sure that the PWD investment, all of those, are those are working in tangent around improvements to the neighborhood?

Many of these departments operate in silos as opposed to, OK, we have Kensington. Who has money coming into here and how do we leverage that with private development?’ Those conversations are still really complicated to have. The water department does their thing.

We try through our office, when I’m aware of all of these moving parts, [to get] people around the table and saying how we’re going to maximize it. I got a couple million dollars for Kensington and Allegheny. For three years we’ve been struggling with what are we going to do with it. I had to bring everyone around the table and say, “How do we invest this money?” And thats why we brought SEPTA to the table.

We’re going to do some branding of Kensington and Allegheny, but you literally have to force those discussions and have Impact there and Kensington CDC there so everyone is on the same page. And that doesn’t happen naturally.

– Text and images by Bob Stewart.

Philadelphia is known for having some of the most passionate fans in sports. Sometimes that’s a compliment. Other times, Philadelphians intimidate other team’s fans. For Philadelphia residents who are fans of out-of-town teams, gameday can [continue reading…]