Walking through the chrome-handled door at the Mayfair Diner, there is often a familiar face to greet you on the other side.

Betty Woods has worked the tables here on Frankford Avenue for 46 years.

“I just fell in love with it. I don’t think I could have worked in an office,” Woods said with a beaming smile.

Woods knows every one of her regulars by name. If she does not, she will make one up for them.

There is also Bloody Mary Bob, who brings his own vodka into the diner on Sundays. She happily brings him the nonalcoholic components of the drink, she said.

When she started in 1971, Woods worked the night shift while her son was young. 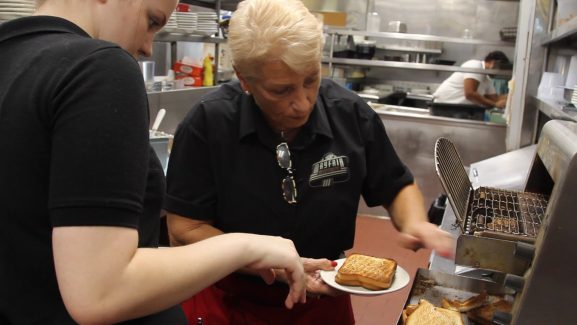 She has the Northeast in her blood. She grew up on Grand Avenue, graduated from Lincoln High School, and now lives right up the street.

In her four and a half decades in the Diner, she watched the community around it transform. 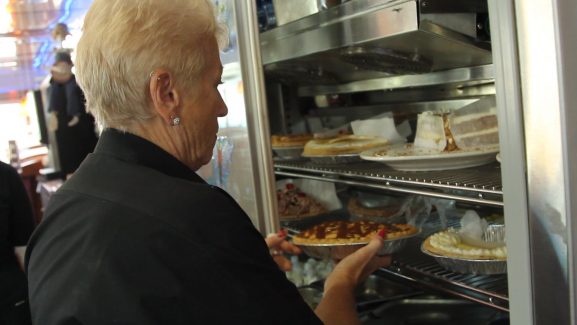 She also says she has seen the rise of the “drive-thru generation” firsthand. Woods said that diners these days are in more of a rush, often opting for takeout inside of sitting around a table.

The Mayfair Diner has been a local favorite since 1932. The 1950s-style diner is open 24 hours, seven days a week. Woods points out, with the exception of Christmas Eve.

Her ties with the diner are as deep as her ties with community itself. When her husband died 16 years ago, she began dating the owner of the diner at the time.

“The beauty of it is before my husband died we used to travel with the owner and his wife. Fast forward a little bit. They got divorced, my husband died and my father-in-law said why don’t you and Ed get together? And we got married,” Woods shared.

Although he since sold the diner, keeping customers happy and the lights on is personal to her.

“It was in my husbands family for 75 years. It is just a part of us, part of our kids, and the recipes,” Woods said, tearing up. “You know, our granddaughter said that her father made the best milkshakes here. So, we would make milkshakes with that recipe.”

She is a favorite among staff and customers alike.

Wendy Miller has been working at the Mayfair Diner as a hostess for about a year now. When asked about Betty’s personality, her face lit up with excitement.

“She is a very outgoing person. She loves the customers as if they are her own family,” Miller said. “She treats everyone very politely. She’s a very genuine person.”

When not on the job, Woods said her favorite thing to do is to spend time with family. She has four children between both marriages, along with seven grandchildren.

“If you don’t know how to laugh, then you can’t be in our family,” she said.

Back at the diner, she is both adored and revered by all the staff both in the front- and back-of-house.

Woods normally works the morning shift, 7 a.m. to 3 p.m., but on this day she stayed late to train a new waitress. 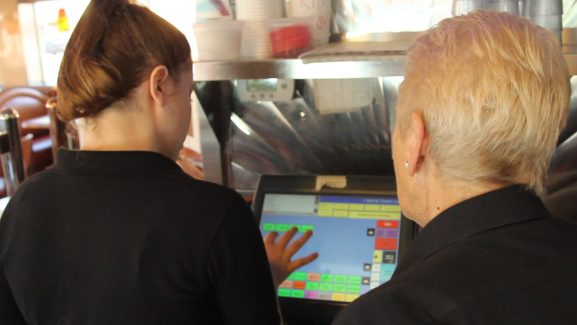 “Ask what kind of toast they’d like, don’t just assume,” Woods told the trainee, watching her punch numbers into the point-of-sale computer.

From knowing how to properly set a table, to knowing which regulars prefer no ice in their water, Betty’s training is thorough.

“Somehow Betty knows how to pick them,” said Selina, one of Woods’ trainees, laughing. “She knows who will be a good waitress and who won’t.”

Woods’ favorite type of trainee: someone who has never stepped foot in a restaurant kitchen.

“That way they don’t have any bad habits. I’ll show them the right way to do it.” 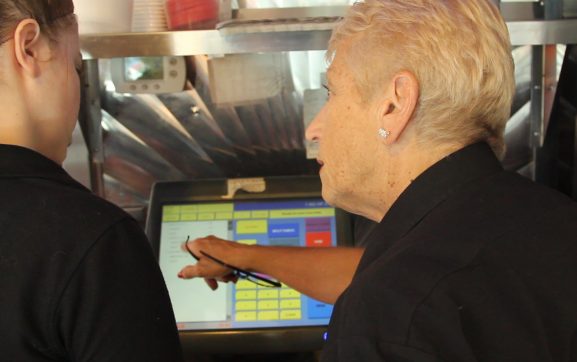 When asked about the stress that restaurant work can bring, she said it is all a matter of attitude.

“If someone doesn’t tip well, or if someone is rude to you, you can’t take it personally. You can’t groan or pout. Because that table might not see it, but the other tables could.” 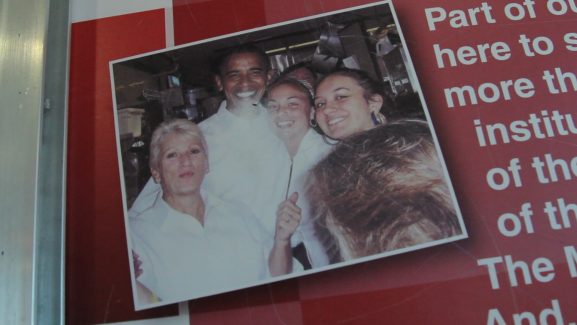 Woods says she has been approached by other establishments about coming to work with them. One customer said he told his boss at the Four Seasons Hotel in Center City about her.

She said he offered her a job, but she politely declined.

-Text, images and video by Jenna Faccenda and Rob DiRienzo.

Diners are a staple in Northeast Philadelphia. With so many different choices on where to eat in one area, it’s important for those diners to have a certain quality the rest don’t. Mayfair Diner Manoli Lagoudakis [Read More]